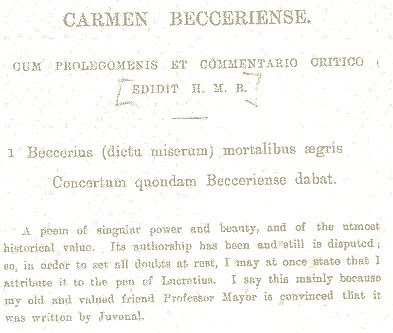 A great rarity from the 'incomparable Max' as Shaw called him. His first publication which appeared 119 years ago almost to the day. A teacher at his public school Charterhouse, a Mr A.H. Tod, charmed by its prodigious wit, had 25 copies printed at Godalming. It is thought that it was done by the printers of the school magazine 'The Carthusian'. It is so little known that its existence was doubted by an earlier Beerbohm bibliographer. They had thought that John Lane's reference to it (as "Beccerius') in Max's 1895 'Works' was 'light-hearted'. It reads:

Beccerius | a Latin fragment | with explanatory notes by M.B. [N.D.
About twelve couplets printed on rough yellow paper, pp. 1 to 4, cr.
8vo, notes in double columns at foot of page. No publisher's or
printer's name.

The only copy known (at Charterhouse Library) is indeed on yellow paper. The slim pamphlet is an elaborate mockery in Latin elegiacs of 19th Century textual scholarship. Auden said that it was a work of which 'an adult humourist could be proud'. It could be said to prefigure Nabokov's 'Pale Fire' in its style--the fake poem and the over elaborate commentary with undercurrents of academic rivalry and obsessive pedantry. He comments on a line about the applause received by a poet:

'We have it on the authority of an earlier writer that Cornelius Grano was applauded for no less than ten minutes. Whether Lucretius was justified ...in calling the applause "nimius" is not a question of vital import. The true poet is not shackled by petty details but my old friend Professor Mayor is...the question is, however, trivial - indeed its very triviality is the best excuse I can offer for the space I have devoted to its discussion.'

Max also prefigures Joe Orton in his altering of plates in books (something for which Joe, unbelievably, went to jail - because they were library books.) Max tended to alter his own copies. Below is an etching of Kipling from Richard Le Gallienne's 1900 work on him where he has changed the title to 'Rudyard Kipling's soul'. I don't know what the original looked like (although it is a book that can be bought online for £10.) J.G. Riewald, a Beerbohm scholar, says 'the portrait has been worked on...and finally transmogrified into a cruel, bitterly satiric caricature full of loathing-"cleft chin, idiot sneer, and eyes jerking sideways as if in panic...' Max obviously had it in for Kipling as he altered the frontispiece of 'Barrack Room Ballads' into a portrait of the author, blood dripping from his reddened fingernails.

One is more likely to come across one of Max's altered books than a copy of 'Becceriense'. He is said to have 'improved' quite a few books including works of Virginia Woolf, Lytton Strachey, Pater, Conrad, Housman, Tolstoy, Yeats, Belloc, Henry James, Tennyson and several more Kipling books. As for 'Becceriense', no copy has shown up as far as I am aware - either in catalogues or in auction... it is almost priceless and Beerbohm surely has one or two collectors with very deep pockets. 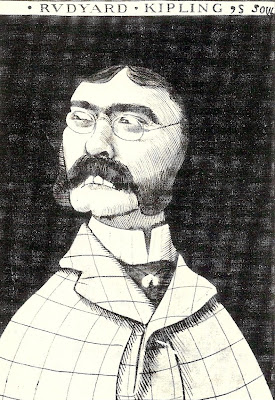 Shaw was right--who can you compare Max too? Edward Lear, Firbank, Kenneth Walliams. I don't think so.

He really did hate Kipling and all Kipling represented - and though I love many of Kipling's poems and stories, the Kipling parody in A Christmas Garland is a horribly accurate picture of the man's less attractive traits.

I have an odd assortment of Beerbohms, mostly read to pieces, including a copy of Seven Men I picked up at a Morning Star jumble sale (used to get great stuff at these) with Duff Cooper's book plate - a somewhat arch pic of Diana Cooper as huntress. I phoned a dealer the following week and described the book to him. After a brief pause, he said 'yes, I saw it - and put it back.'

Nigel, did you see this strange Byron Rogers story of a man who impersonated him - the man claimed at one point to run a Charing Cross Rd bookshop! -