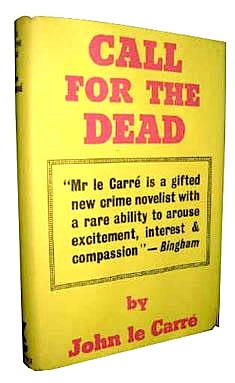 MODERN FIRST EDITION / ESPIONAGE
Last night I dreamt I went to Manderley again...in fact I dreamt of a fine/fine 'Rebecca' and a shelf full of Gollancz first editions all pristine in their yellow jackets. Orwell was there, Dorothy L Sayers, Gibson's 'Neuromancer', Larry Niven's 'Ringworld', Daphne's even more valuable book 'Jamaica Inn' ...a bunch of early Michael Innes, Visiak's 'Medusa', a 'Lucky Jim'', Charles Williams, Edmund Crispin, Kafka and the first two Le Carré's--with a few signatures and the odd loosely inserted autograph letter a 3 foot shelf of the top titles in fine condition would be knocking on a six figure sum in dollars and with luck even pounds sterling.

Near the top of the list is 'Call for the Dead' Le Carré's debut novel with Smiley as a sort of antiBond figure-- unstylish, plodding, cuckolded. This suspense novel was runner-up for the first prize in the British Crime Writers Association awards for 1961. Plot summary: "A murder passes for suicide . . . A bereaved wife is forced to hide her grief . . . A master spy challenges a favorite pupil to a lethal duel . . . ". Penguin blurb: "John Le Carre's taut, coiled tale of cold-war espionage set in foggy London and introducing a hypnotically fascinating hero, George Smiley, short, fat, and unobtrusive-by all outward appearances a far too ordinary man to be what he really is: a top intelligence officer on the trail of the most fiendishly clever spy ring ever to operate out of East Berlin." Le Carré is now regarded as 'one of the half-dozen best novelists now working in English' (Scott Turow.) Interestingly the special spy language used in the books has apparently been adapted by MI5 itself where it was not used already - lamplighters, dead drops, moles, one time pads, pavement artists etc.,

VALUE? There are a lot about. A decent inscribed copy sold last month at Bloomsbury for £3300 + commission and can now be found listed at £9000. It has made more several times in auction without a signature - £8000 at Sotheby's in 2000 and £5900 (In repaired d/j with minor soiling, unsigned) in 2002. While there are a lot for sale at the moment no one is breaking ranks and the lowest price (a modest example but with a TLS loosely inserted) is £4500. A seller in South Africa (something of an epicentre for silly prices) wants £20000 for a very fresh example from his own collection. He also wants to see extra postage ('Courier Service only for this item.') Beware of dealers selling their own collections.

Another seller at a vertiginous £15K+ for an unrestored but not fine copy suggests that the book would make a very good long term investment. Possibly true if you bought last month's auction copy, but at this price you might wait until well beyond the 2024 Olympics just to get your money back. In fact when a bookseller suggests a book is an investment it is an almost infallible sign that it is not. The book market is notoriously hard to predict and an author who is sexy now may go flat before long. Patrick O'Brian has not gone ahead for several years, the R.D. Wingfield market has become flaccid, John Fowles tanked in the 1980s, Durrell is treading water and even Robert Graves is not the man he was etc.,

OUTLOOK? Le Carre's first two books are always going to be hard to find and a perfect copy could nudge into five figures especially when some optimism returns to the market. The yellow Gollancz jackets are thinnish and prone to wear. Auction records suggest that the book is in a gentle, possibly temporary, decline. His second book 'A Murder of Quality' is a better read and scarcer but not as valuable and may prove a better bet. The consensus is that he has not produced a great book since the 'Constant Gardener'; most of his books beyond the first three are very common (even signed.) Worth noting is the fact that the jacket of 'The Spy Who Came in from the Cold' remained exactly the same for about 10 printings-- this is sometimes turned to advantage by fiendish dealers who marry them with jacketless firsts or upgrade lesser copies. An almost undetectable ruse--as they say in Russia--'not caught, not a thief.'
Posted by Bookride at 7/28/2009

'Robert Graves is not the man he was...' From personal experience trying to sell a collection I know this to be true. I think I will wait until he comes back into favour. The same may have happened with Sassoon?

Jacket marriages are dastardly you can xpose these bigamists. Al Munchen

If a jacket is exactly the same across 10 printings, what difference does it make?

Whereas in the first 10 or so printings the jacket stayed the same each new printing is noted in the book itself. Dealers with a first edition of the book would upgrade the jacket from a later printing or supply a jacket for a copy of the true first that has lost one

This is frowned on and even prohibited by some book organizations. It only becomes obvious when there is a disparity between book and jacket. As one of the purposes of the jacket is to protect the book, if the jacket is in better shape than the book a 'marriage' is likely to have been performed. To my mind this something that is unlikely to bother St Peter when you are knocking on heaven's door but down here some dealers can become incandescent about it....

I have a fifth printing of Spy who came in from the cold, first issue Looking Glass War and Murder of Quality published by rediscovery books Hill and co. Are any of these books of value?
Thank you in advance

Any idea where I can obtain a DJ for my jacket-less 1st ed of Call For The Dead? I'd even settle for a reproduction, temporarily, to keep it covered on display. No interest in selling the book, just obtaining the DJ.

The prices for this book have certainly climbed since 2009.