Paris in the Spring...

At the end of June I was in Paris and have just unpacked some books that I bought there. I may just get my money back after expenses. Breaking even is not good business and is basically the same as going broke. Sacré Bleu. Will have to regard my sojourn in Paris as a holiday rather a buying trip. Blame the Euro. Paris, which used to be so reasonable, was now ruinously expensive and French dealers seemed to charge as if we were in the middle of a Porsche and red braces boom. Recession (probably much referenced when buying) seems to mean nothing to them and books that we can get £10 for are routinely priced at 35 Euros (about £30). English books are always looked up on every database and then priced with a heavy hand, if not an iron fist. That being said there were a few chinks in their armour. 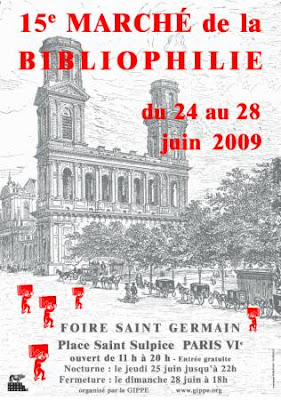 I bought a very nice limited edition set of Jane Austen, that had been in the library of Arnold Bennett, for about 750 Euros and hope to get £1300 for them - practically a double up. French dealers are more cautious buyers and tend not to touch anything they can't sextuple - they then price their books so magnanimously that they could take a couple of decades to sell. However I bought a small album of vintage "feelthy postcards" for a euro each (actually 85 of them for 50 Euros)- something of a snip. Picture below of a jolly nude in a library. 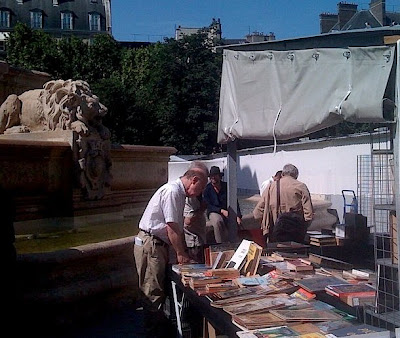 One of the great pleasures of going to Paris was visiting the book fair at San Sulpice (see above.) Few things are more enjoyable than looking for books in the open air even if bargains are rare. Bright sun all day, the gentle sound of the fountain, the shade of trees, good cafés nearby. There used to be a partly open air bookshop in Ojai California ( the guru infested town where they shot 'Lost Horizon') and several open air book markets in South of France. Info on any other open air book shops, markets and fairs is welcome. 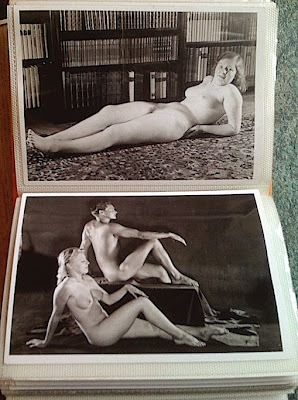 Open air? Isn't that bad for the books. I'm thinking of gusts of rain and direct sun. OK for a few hours but for 4 days I am not so sure.

I've been to the open air bookstore in Ojai! The books outside are priced at $0.25-.50 and I have found some awesome books for very cheap. None that you could sell for much as the generally lack the dust covers but definitively some keepers.

As the French were haughtily indignant about the anglo-saxon invention the Internet, their reticence in the early days meant English-language book-buyers could still find bargains. Vive le Minitel as they would say! Helas, they grudgingly have been shown the error of their Gallic ways and any reasonable prices with them.