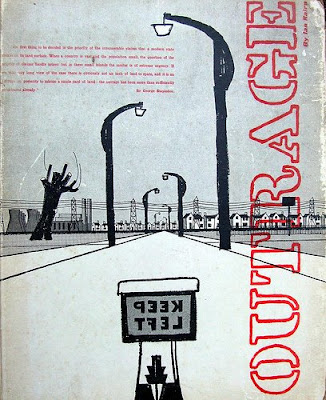 When Ian Nairn died of cirrhosis of the liver in 1983 aged just 52 he was a largely forgotten figure whose best work lay many years behind him. Some may have remembered his column in the Sunday Times and his TV shows that saw him pootering around the UK in a Morris Minor. Many may have bought his brilliantly idiosyncratic book on London, or perhaps his similar guide to Paris. But all this, together with his work with Pevsner on guides to Surrey and Sussex, was part of his creative period. For nearly a decade afterwards he had done nothing but drink himself into an early grave.

But, the great, the pioneering Ian Nairn, has always had a small, devoted following, and thanks to people like Jonathan Meades and other devoted fans through the world he can be seen as one of the great prophets of environmentalism. As such, there has always been a demand for his books, and particularly for his debut polemic, Outrage (1955). In this astonishing indictment of post-war planning Nairn sought to name and shame all those ‘ agents ‘responsible for the shocking ‘creeping mildew ‘ that occasionally individuals, but usually local authorities, had visited on both town and countryside over the years. He called it ‘ death by slow decay ‘ and he coined the word ‘Subtopia … a compound word formed from suburb and utopia, i.e, making an ideal of suburbia ‘, to describe what this malaise produced.

Outrage would have been an astonishing debut for anyone in his forties with two decades of architectural training behind him, but Nairn was just twenty-five year old, an ex-RAF pilot with a degree in maths from Birmingham University and with no architectural qualifications whatsoever. Like Betjeman before him, Nairn’s lack of professional qualifications did not prevent him contributing brilliantly perceptive pieces to the Architectural Review in the early fifties and I have a theory that it was Betch’s famous diatribe on post-war England in First and Last Loves (1952) that was mainly responsible for Nairn’s excursion into polemics. Around 1954/ 1955, in the spirit of Priestley (1936) and Cobbett (1823), he decided to take a rain check on the visual state of England by taking his camera with him on a journey 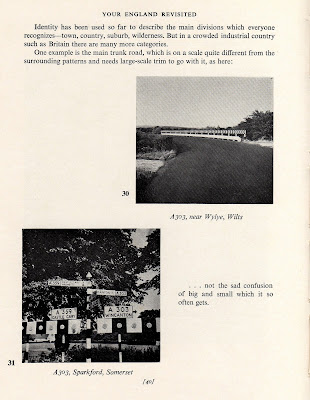 from Southampton to Carlisle and beyond. The result was a damning indictment of planning blunders and architectural solecisms and it duly appeared as a special number of the Architectural Review in June 1955 and was published as a separate book soon afterwards.

Looking at Outrage now, its tiny photographs and architectural graphics, it can read like a period piece; it is when one examines the tone of voice that Nairn’s prescience seems astonishing. His is the voice that was scarcely heard at that time—indignant, disrespectful, and yet so very rational and sane. And the book evidently made its mark, because a reprint was called for immediately. Less immediate was the response from planners ( who, let’s face it, are not the brightest ). Over the years, however, the influence has been greater among those with similar agendas to Nairn’s. Without Outrage and its follow up, Counter Attack and such works as Your England Revisited, there probably wouldn’t have been Private Eyes’s ‘Nooks and Corners’. The trendy psychogeography of Ian Sinclair and his imitators owes much to Nairn too, as does the more recent Crap Towns. Things have improved a little in the past forty years. We don’t allow a perfectly good Georgian country house to rot ; we would never allow a fine Georgian terrace to be bulldozed to make way for a shopping parade and we wouldn’t let the National Grid string a line of pylons across a scenic river valley; we are more aware of the creeping effect of ribbon development and the ugliness of concrete lamp standards. However, some of the general lessons that Nairn taught—particularly the value of keeping suburban sights out of the country and gentility away from town centres-- which to anyone of any aesthetic sensitivity whatsoever are no-brainers-- are still being ignored by planners, and visual blunders involving street advertising, road signs, mobile-phone masts, fencing, etc are being committed every minute of the day around the UK.,

Although Outrage remains the Nairn title that everyone wants, prices aren’t exorbitantly high for something so worth having. A friend recently (on my recommendation ) went in search of a copy in her local bookshop and found a reprint of 1956 in good condition for a mere £25.One copy of the first was recently s priced on the Net at around £100, but this has now gone and in the past year or so a number of copies have quickly been and gone, such is the steady demand. Counter Attack is much easier to find at around £20 -£30, though it is unlikely that a great many were printed. Other titles by Nairn are more common still. [R.M. Healey]
Posted by Bookride at 8/09/2009

Ian Nairn is yet another author of whom I knew nothing till encountering him here - thanks very much Mr Healey.

Thank you Mr Healey for this rare summary on Nairn; I am researching him for his connections to another non-architect in the states, William H Whyte who commissioned Nairn and Cullen to travel the states and contribute an article to 'The Exploding Metropolis' in 1958. Where might find a portrait of Nairn?
M Fitzpatrick, September, 2009

o M.Fitzpatrick: you can find a great portrait of Ian Nairn on the Architects' Journal (january 1955) when he was declared Man of the Year. I am writing on Ian Nairn and I strongly recommend Erdem Erten PHD thesis at the MIT (2004). Mr Healey: what a fantastic blog!!!!!
Thank you!
Lorenza Pavesi (I'm on facebook)

sorry: the same portrait is on the Journal 7 of the twentieth Century Society's journal...there's a great article on Nairn by Mr. Gavin Stamp there.