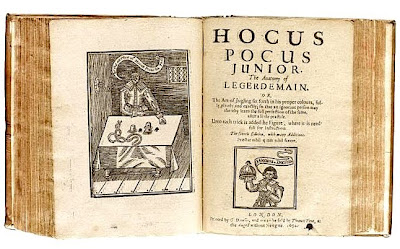 The object of great desire by collectors of conjuring books-- it is the first devoted exclusively to magic as a performing art. It was based on Reginald Scot's 1584 work on witchcraft, of which more anon. Subtitled '... the art of iugling set forth in his proper colours, fully, plainely, and exactly, so that an ignorant person may thereby learne the full perfection of the same, after a little practise. Vnto each tricke is added the figure, where it is needfull for instruction.' The very rare first edition has 52 pages with woodcut illustrations, subsequent editions were somewhat expanded. There were many editions, even into the 19th century --all are valuable and surprisingly hard to find. Most copies are said to be in instititions. Various modern facsimiles have appeared, mostly now pricey.

I was alerted to this book by reading a report by the admirable saleroom correspondent Ian McKay. There aren't many people in this field, possibly the most noted apart from the fluting Godfrey Barker was Geraldine Norman (wife of Frank 'Sir, You Bastard' Norman.) Ian reported in 'Antique Trade Gazette' that a copy of this slim book appeared in an auction in July bound with 20 other items. It was a later edition from 1654 but still rare as hen's teeth. The other books and pamphlets were of some interest but the general consensus is that it was 'Hocus Pocus' that bought the £37, 500 bid. (£30K + £7.5K to Sotheby's for their pains.)

This brilliant result brings home the lesson that it is always worth examining bound collections of pamphlets. Many are sermons but even there treasure can be found. Uber runner Martin Stone found the great Churchill rarity 'Mr Broderick's Army (1903) in a bound collection of otherwise unremarkable pamphlets. If Joyce's 'Et Tu Healy' (possibly entitled 'Parnell') ever shows up it will probably be bound in with some Irish political tracts of the late nineteenth century. To be continued with inter alia an examination of what else was bound into this fat volume that might explain the fat price...
Posted by Bookride at 8/30/2009