Checking prices of French books on the net 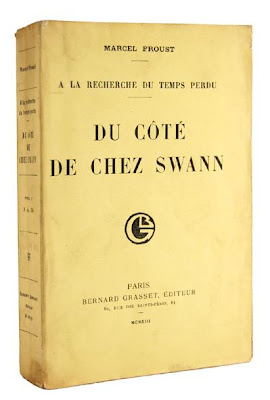 In general it is best to stick to prices charged by French dealers, outside of France dealers tend to overrate these books and fail to understand condition standards and all the different states of the limited editions. Some have limitations as low as 2 or 3 copies, on vellum thick as Mother's Pride. Most book sites will not recognise signed books in French even if you tick the signed box so use words such as 'envoi' or 'envoi de l'auteur' in the keywords section. 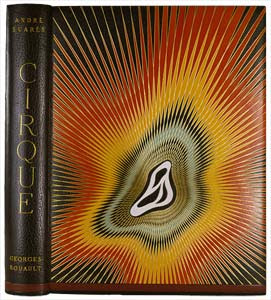 start booking holidays or ordering cars if you find a signed French book-- they are thick on the ground and values can be surprisingly low even with relatively major names. World class names such as Proust, Baudelaire, Rimbaud (mega), Lautreamont are cause for celebration if you come across books signed by them but you can occasionally find books signed by, say, Camus or Huysmans or Cocteau for low three figure sums. The ubiquity of signed literary books was once explained to me as being part of their salon system where writer and their readers enjoyed lively liaisons and literary intercourse...

The other thing to look for with French books, apart from colourful erotica and tomes with illustrations by modern masters such as Picasso, Rouault, Foujita, Man Ray or Braque, is exquisite bindings. Leather bindings that we might regard as very fine and elaborate are, by comparison with French efforts, ordinaire and at best worthy or merely competent. Left is a superb Bonet binding for Cirque an unpublished 1939 work by André Suares with illustrations by Ambroise Vollard. Livres d'Artistes in their elaborate boxes, chemises and slip-cases are another story to be dealt with at another time... The trouble with all this is that these books scream high values--they are very unlikely to show up undervalued. But not impossible. Never forget the wise and stirring words of Cadillac Jack --'anything can be anywhere.' Courage Fuyons!
Posted by Bookride at 8/16/2009

Daniel Knoderer? I have a French book bound by him in a great modern binding. I will try to email you about it soon with pictures. Jess

sorry to be pernickety but vollard was actually the publisher... the illustrator was georges rouault...

Love both your posts on French books - I collect them and it is an endlessly fascinating subject. Editions printed on grands papiers can often be had for reasonable sums, and the printing is gorgeous. Funnily the regular versions are nearly always flimsy and falling apart. There is no "middle" in French publishing it seems. More articles on this topic, please.

A quick thought on the senselessness of signed books.
Signed Books

I FOUND A BRENOT AFFICHISTE BOOK PUBLISHED IN 1996. IT IS SIGNED AND HAS A DRAWING BY THE PIERRE LAURENT BRENOT.I WAS INTERESTED IN HOW RARE THIS BOOK IS. DOES ANYBODY HAVE ANY INFO? PLEASE CONTACT