Now that England have regained the Ashes, dealers in cricketiana will doubtless be rubbing their hands in anticipation of the expected surge of interest in cricket-related material . The football season has begun too, but although someone paid £19,000 in 2006 for an FA Cup Final programme of 1889 ( a record for any footballiana ), collectors of cricket books have always had the reputation of being more discerning than their soccer-mad counterparts, and also more willing to shell out big bucks . Most club chairmen would rather put their money into buying a new centre half than building up a collection of late Victorian programmes. Collectors, wealthy or otherwise, of cricket books seem to be more obsessive. In October 2005, for instance, the private library of the fanatical collector Desmond Eager brought some of the most ardent cricket fans to Christies’. Even those who expected strong bidding were astounded at the prices fetched. Celebs in the arts and entertainment figure strongly among the ranks of collectors and I suspect that agents for some (like Tim Rice and Charlie Watts ) may have been responsible for many of the inflated prices on this occasion. 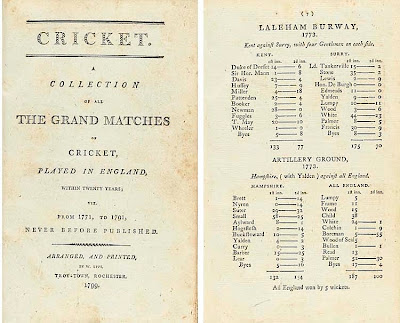 The biggest money was reserved for early documents . Two modest looking and frayed pamphlets, one disbound, smashed records. These were the incredibly rare score-sheets of matches played in late Georgian England, when the bowling attack consisted of fast underarm deliveries. William Epps’ Collection of all the Grand Matches of Cricket in England (Rochester 1799) and Samuel Britcher’s Complete List of the Grand Matches of Cricket that have been played in the year 1795 ( London 1795) both made £90,000, which in the case of the Britcher works out at a cool £3,000 per page ! Not bad for ephemera that once cost a few old pence a pop. However, if you believe that the chance of finding any of these rarities in a job lot of pamphlets at your local saleroom are as likely as Ireland winning the next cricket World Cup, you should think again. Although the print run of each pamphlet was ‘probably small ‘, no-one knows exactly how many copies were issued, and it mustn’t be assumed that most ended up as charred paper on a Georgian fire grate.

If very early football programmes can turn up occasionally, there is no logical reason why one or more of these early records can’t be found either bound together in one volume or bound in with other related matter. Rare ephemera does survive and dealers make most of their money from such material. At present well known cricket book specialist Christopher Saunders has nothing so early ( though he does stock facsimile reprints of Britcher et al ), but he is selling for a jaw dropping £400 a Hampshire Cricket Club Guide for 1894 that once retailed for six old pennies.

Ashes material of a similar type and vintage is also as rare, though not as pricey as Georgian scorebooks Saunders wants £250 for a complete record of the 1884 tour and £350 for one dealing with that of 1909. But if you just want a contemporary magazine account of the Australian Tour of England in 1899 or 1902 he will sell you two disbound articles for a modest £10 each. As for Ireland winning the World Cup, the rarest item featuring an Irish team abroad went for £3,000 at Bonham’s in December 2005 . The Irish Cricketers in the United States by ‘One of Them’ was published at one shilling in 1879. Early biographies and autobiographies of famous players ( even W.G.Grace )can often be reasonably priced, though tipped in signed photos and association copies obviously add to the price of all such material.

It goes without saying that, with a few exceptions, post First World War items are easier to find and very much cheaper, although volumes of Wisden (especially the 1916 issue ) that listed the short careers of those who perished in the trenches command very high prices. Cricket books can be found in the most unlikely places, but generally, I found abebooks a disappointing source, especially of the more obscure material This is possibly because the site is dominated by American dealers and few dealers or collectors across the pond are interested in the game. They don’t know what they are missing. We are the Barmy Army ! [R.M.Healey] 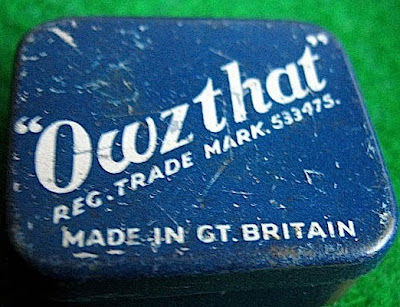 OWZAT! Thanks Robin. I have made some good rewards from Wisden's over the years and even at one point had an early Cricket poem. I sold it to the churlish old bookseller of Richmond the late Eric Barton. Whenever I visited his shop he always asked if I had any eighteenth century Cricket books, so when I actually turned up with one he was knocked for six. I can't remember what he gave me for it but I recall it paid for a trip to Milan and beyond...
Posted by Bookride at 8/26/2009

Soured bats for Dravid On seeing the above title do not think that Soured Gangly has given up his decision to quit from all the versions of the game of cricket and is back in the scene. E mean to say that Soured, nicknamed as ‘Dada’ by the fans has hailed the decision of the selection committee to bring back Rahall David and thereby proving that only form was the problem associated with senior players and age had nothing to do with performance. Sourav expressed hope that the right hander would fare well in the upcoming tri-series. For the past one year Rahu l Dravid – ‘ The wall’ had been away from the one day format of the game. Sourav tried to strengthen his contention by citing the inclusion of Nehra as another example. Sourav’s statement assumes significance in this scenario as we find the three batsmen Laxman, Dravid and Sachin who are at mid thirties of age, delivering a consistent good performance.
Five players who were part of the squad that defeated West Indies in the latter’s soil failed to earn a place in the newly announced squad. Dines kart hick was lucky to be included as the last man replacing the recovering Sehwag. The same squad will be retained for both the traceries (in which Srilanka and Newzealand are other participants) and the following Champions trophy to take place in South Africa. Suresh Raina- A player who had established his capability many a time missed out previous tournaments due to a broken thumb has recovered completely. He is back in the squad. Selectors have shown mercy on the other player Yusuf pathan.