Single copies or even complete or nearly complete sets of this comparatively unregarded series aren’t hard to find, and compared with the often less attractive Fortune Press volumes brought out by the more commercially minded Reg Caton are distinctly cheap, especially when one considers that a handful of the poets concerned achieved literary celebrity ( not always for their poetry ) later on in their careers. The brilliant debut collection by Charles Causley tends to be singled out by dealers on the Net, but the work of 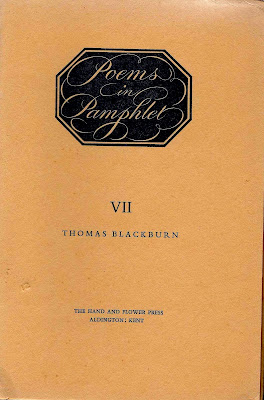 several other debutants is worth looking out for, including 'Relations and Contraries' by Charles Tomlinson and 'The Outer Darkness' by Thomas Blackburn, as well as volumes by interesting writers, such as Alan Barnsley, Ursula Wood, Peter Russell, Jon Manchip White and Jocelyn Brooke.

Each slim volume had an identical size and design, was bound in card covers and priced at a modest shilling. Each appeared in consecutive months over a two year period and could be bought either from bookshops or directly from the publisher - the American Erica Marx from her home in Aldington on the edge of Romney Marsh.

Marx, whose centenary falls this year, seems to have been unusual among literary publishers in that she had liberal, almost altruistic motives. Little is known about her early life, but we do know that before she established the Hand and Flower Press in Kent in 1940 she operated Les Press de L’Hotel Sagonne in Paris for two years. Presumably, like Caton ( who may have been her inspiration ) she scoured the literary press and especially the many ‘little magazines ‘of the forties ( some of the names of which appear in the separate pamphlets ) looking for those who she felt deserved ( as she explained )‘ publication in book form ‘.

It would seem that by the mid forties she had already begun to publish the work of poets she admired, such as Thomas Fassam, and the 1950 debut of Michael Hamburger predated his appearance as a poet in pamphlet. Of the twenty six poets she published in 1951 and 1952/3 half a dozen can be classed as outright duds, including Marx herself, writing as Robert Manfred; some of the others already had reputations, such as Peter Russell, the expert on Pound, who was already the admired editor of the little magazine Nine, Rob Lyle, who conducted the Catholic magazine Catacomb, F. Pratt Green, who was an admired and prolific writer of hymns, and the novelist Jocelyn Brooke. Causley, Tomlinson, Blackburn and Hamburger consolidated their reputations as poets. Quite a few of the remaining poets became better known for other things.

Robert Waller was to write the intriguing 'Shadow of Authority' (1956), a novel that satirised BBC radio producers, including Geoffrey Grigson and Roy Campbell. Charles Higham, at twenty the baby of the group, became a controversial Hollywood gossip-style biographer, and is still alive. Arthur Constance, the oldest at 60, was a bibliomaniac who by 1951 had already collected a library of 16,000 volumes, including arguably the largest collection of clippings on Fortean phenomena ever assembled —an archive which was scandalously destroyed after his death. Ursula Wood became the mistress of composer Ralph Vaughan Williams in a strange ménage a trois; Alan Barnsley, A.J. Bull, Thomas Fassam, Frederic Vanson and Hal Summers ( a Whitehall mandarin in his spare time ) continued to publish verse, while Jon Manchip White went on to an amazingly prolific career as a novelist and screenwriter, even contributing an episode of the Avengers*** in the nineteen sixties.

With Poems in Pamphlet it’s best to buy a complete set of all 25 volumes, which one dealer is offering for a modest $200, admittedly a big mark up on the original 14s 6d for the 1951 set ( including postage ), but a bargain considering the big names included in these sets. Separate copies can work out expensive, especially if signed. For some extraordinary reason Bookbarn International want $69.57 for R.H.Ward’s signed Twenty-Three Poems , which makes Hamburger’s debut volume from Martin Booth’s library, for which The Poetry Bookshop asks a mere $40.23, seem a bargain. Similarly, if you pine for a copy of A Time to Speak complete with tipped in dedicatory note by ex BBC employee Gwyneth Anderson ( one of the ‘ duds ‘) it’s yours for a mere £70!!
Better value, I suppose, is The Elements of Death by gay icon Jocelyn Brooke, for which Peter Ellis demands $142.47. And although I paid just £1.20 for my Causley and less for my other titles, most volumes in the series can be had for between £5 and £8. [R.M. Healey]

Thanks Robin for throwing light on this slim series. Good to see something affordable and something which if bought carefully (avoiding shacks, barns and the carriage trade) might hold its own in value. Poetry is an investment, sometimes a surprisingly good one...Talking of the great Jocelyn Brooke I have always kept an eye open for his 'Six Poems' which he published privately in 1928. Recently republished (also in 50 copies) by Callum James.
The original has to be into four figures but the 2009 edition is a fine substitute. Mentioned in D'Arch Smith's 'Love in Earnest' it is one of the last flowerings of the Uranian movement:

'Here we may ride, you
and I; the sun is in your hair, and you
have pinned the shivering
early primrose to your coat...
the pale, nude flowers
that I
picked for you.'

*** The episode of 'The Avengers' written by Jon Manchip White was called 'Propellant 23' and aired on 6 October 1962. He also wrote a lot of other 'tellys' including Sergeant Cork (first episode) Witch Hunt, Naked Evil, Mystery Submarine and the movie 'The Camp on Blood Island' (1958) (story and screenplay). Below is an image from his Avengers episode--the plot concerns a lost bottle of rocket fuel and it features Honor Blackman, with Geoffrey Palmer as a nasty piece of work. Manchip White was born in 1924 and currently lives in Knoxville, Tennessee where he still writes novels.