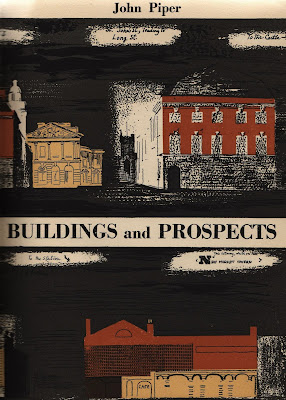 Frances Spalding’s long awaited twin biography of John and Myfanwy Piper is being reprinted less than a month after its appearance. This is something almost unheard of in the small world of art history books. So either there is currently a Piper resurgence, or the OUP has badly underestimated the demand, or both. Or perhaps people want to discover more about the hitherto neglected Myfanwy, who among things, was Betjeman’s muse. But there is no doubt that John Piper has some incredibly dedicated fans. The Net is full of them. One of the most devoted is Ken Hayes, whose John Piper site is admirably comprehensive.

People who can’t afford paintings by Piper tend to collect the books written, designed or illustrated by him. I’ve already dealt with the Shell Guides series in an earlier blog, but there are so many other Piper items worth collecting. Some are very obscure and very expensive indeed. Take his first book, published when he was just 18-- The Wind in the Trees. I’ve never seen a copy of this book of verse which Piper’s dad got the Horseshoe Publishing Company of Bristol to bring out in 1921. Even Hayes admits to not having found a copy. Presumably they exist somewhere, or is this another et tu Healy situation ?

Piper’s second slim volume, The Gaudy Saint, which appeared 3 years later from the same publisher, is only slightly less scarce. Blackwell’s have a copy at a hefty $942. Then in 1925 Piper senior paid the Curwen Press to publish his memoirs. Sixty-three Not Out would be unremarkable without the 19 tiny vignettes by the twenty-two year old artist, by then planning to leave his post as a clerk in his father’s law firm for art school. About 20 years ago I actually found a copy marked at £10 in the basement of a shop in Cecil Court ( I forget which one ), but rejected it as a bit peripheral. What an idiot I was! I’ve never seen another copy since, but Maggs now have one priced at $707. Drat it !

Brighton Aquatints (1939), Piper’s first important book, is not seriously scarce but is always sought after. There is a tale that Betjeman coloured in some of the aquatints, but I’ve never actually seen a coloured version. Incidentally, Piper also contributed an aquatint as a frontispiece to S John Woods excellent John Piper: Paintings, Drawings and Theatre Designs (1955) and this too I have seen coloured in, though it looks better uncoloured. Myfanwy once gave me one of these prints from a pile hanging around at Henley Bottom Farmhouse after Piper’s death. A few years earlier she had very kindly presented me with a whole run in mint condition of the incredibly scarce Axis, the avant garde art magazine she had edited in the thirties. For this I will be eternally grateful. I would never have been able to afford such a treasure otherwise. 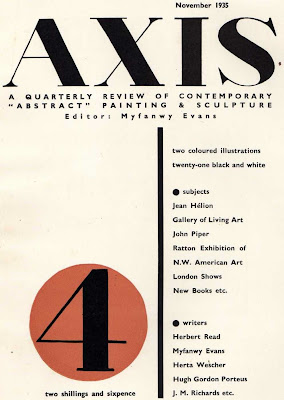 Another great scarcity is Colour in the English Country House, which appears in the bibliographies, but which few, including myself, have seen. It’s possibly the sort of booklet that might have been discarded with annual spring-cleanings and could be worth having if it turned up in a box of books somewhere. Most other Pipers are nothing like as rare. Books with wrapper designs by him shout out Piper and are common enough, as are books containing his illustrated. Piper’s own title in the Britain in Pictures series, British Romantic Artists, comes up all the time. On ABE at present there are 62 copies, all hovering around £6- £20, but for some reason one chancer in Santa Barbara ( about as far away from Piper country as you can be ) has stuck a price of $250 on a copy. The thing doesn’t seem to have an original Piper abstract or postcards from Betjeman loosely inserted. It’s just a perfectly ordinary copy of a common book in a standard wrapper printed with printer’s ink, rather than painted by Piper himself in an idle moment. But on this particular subject, Piper did on one occasion reproduce in ink the cover of his Buildings and Prospects for a friend who had lost the wrapper of his own copy. Now that would be a book to covet. [R.M. Healey]

Thanks Robin. I sympathise with your annoyance at having let go 63 Not Out ('a bit peripheral'). I have done this with other books and regretted it and gone back only to find "the swifter glove of another hunter" has nabbed the book (Javier Marias.) Hells, bells and buckets of blood! A trivial point about Piper is that sartorially he was similar to Anthony Powell - they both wore non v-neck pull overs over shirt and tie with the tie plumping out the at top of the pullover like a second Adam's apple - to me it tends to signify the chap will not put up with any nonsense. James Lees Milne also affected this style (are there others?) I guess it's an upper class thing and you seldom see it anymore. I am not sure if Piper is a long term investment and whether succeeding generations will discover his art. Given the enthusiasm with which his bio has been received he is probably sound. Because he has never been trendy it is unlikely that he will go out of style...

Below is a splendid Piper painting - Gordale Scar, Yorkshire, 1943. 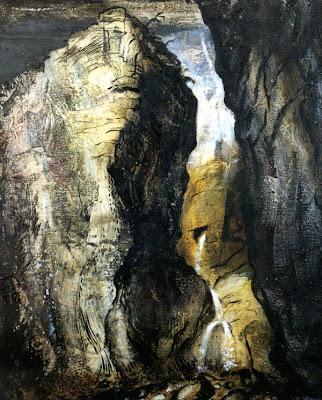 Neither Colour in the English Country House nor The Wind in the Trees are in the BL.
I always liked the story of Piper painting Windsor Castle in 1940. He produced super-neoromantic paintings with the castle lashed by lightning and rain in high winds under a full moon. At the exhibition George VI said to Piper "It's a pity you had such dreadful weather on your visit."
If not true, it ought to be.