Books for War, Books for Soldiers 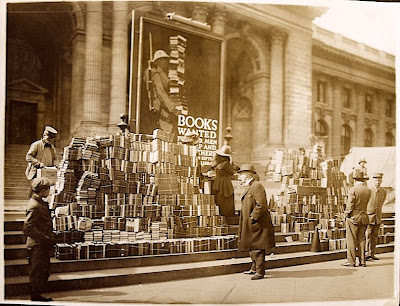 I found this picture mentioned peripherally on a tweet from the redoubtable book blog Book Patrol coming out of Seattle, the caffeine capital of the world. It shows the results of a book drive in World War One--bundles of books on the steps of New York Public library. The actual poster urging people to bring books to libraries "for our men in camp and 'over there'" is hanging in the background- a jumbo size version. It is by Charles Buckles Falls and came out of a poster project at the Division of Pictorial Publicity, part of the Committee on Public Information; the campaign was lead by Charles Dana Gibson, the creator of of the Gibson Girl image and those charming large white illustrated books (which are always worth less than you would think.) The poster seems to sell for several hundred dollars and giclee repros for about a $100 if a good size.

There was also a move in England during WW1 to get citizens to donate books for the war effort. These were not for the soldiers who were busy reading cheap copies of fiction by Buchan, Sapper and Ian Hay; because of a paper shortage the books were pulped. I have heard that this is one of the reasons that Victorian three volume novels ('three deckers') are so rare. In 1914 a three decker novel was like a Betamax video is in 2009 - obsolete, vieux jeu and space intensive. I have heard dealers speculate about this and it may be a myth - pulp fiction, you might say.

Do soldiers still need books? Did they have campaigns like this in WW2, Vietnam or the Gulf War? And when the books go to war (like all the books on the NY Public library steps) how many make it back? Some do, I know, because I have bought them. Typically they come back somewhat the worse for wear. One thinks of stories of soldiers carrying books in vest pockets (usually bibles) that saved their life by stopping a bullet ('bullet hole through middle of book else fine...') 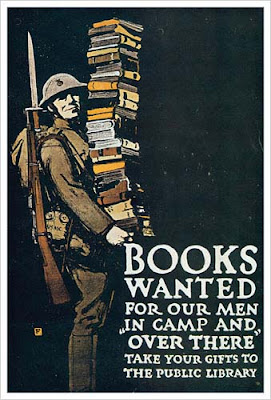 "because of a paper shortage the books were pulped... I have heard dealers speculate about this and it may be a myth - pulp fiction, you might say."

It undoubtedly hppened in WWII. Clare Harman in her biography of Sylvia Townsend Warner mentions that STW saved a lot of books in Dorset.

"One thinks of stories of soldiers carrying books in vest pockets (usually bibles) that saved their life by stopping a bullet ('bullet hole through middle of book else fine...')"
A.E.Housman lamented that the slimness of A Shropshire Lad made this less likely to happen with his verse.

Thanks Thersites and McBloggett. 'A Shropshire Lad' would not stop an airgun pellet--I should have added Woody Allen's old joke and here goes (verbatim)

"... Years ago, my mother gave me a bullet...a bullet, and I put it in my breast pocket. Two years after that, I was walking down the street, when a berserk evangelist heaved a Gideon bible out a hotel room window, hitting me in the chest. Bible would have gone through my heart if it wasn't for the bullet. "

Can't find my Sword of Honour - is it Crouchback's Uncle Peregrine who rescues rare books donated for pulping?? The pulped books are destined to become copies of Horizon says the narrator (if I mind aright).

Fair held the breeze behind us — 'twas warm with lovers' prayers.
We'd stolen wills for ballast and a crew of missing heirs.
They shipped as Able Bastards till the Wicked Nurse confessed,
And they worked the old three-decker to the Islands of the Blest.

By ways no gaze could follow, a course unspoiled of Cook,
Per Fancy, fleetest in man, our titled berths we took
With maids of matchless beauty and parentage unguessed,
And a Church of England parson for the Islands of the Blest.

We asked no social questions — we pumped no hidden shame —
We never talked obstetrics when the Little Stranger came:
We left the Lord in Heaven, we left the fiends in Hell.
We weren't exactly Yussufs, but — Zuleika didn't tell.

No moral doubt assailed us, so when the port we neared,
The villain had his flogging at the gangway, and we cheered.
'Twas fiddle in the forc's'le — 'twas garlands on the mast,
For every one got married, and I went ashore at last.

I left 'em all in couples a-kissing on the decks.
I left the lovers loving and the parents signing cheques.
In endless English comfort by county-folk caressed,
I left the old three-decker at the Islands of the Blest!

http://www.guardian.co.uk/books/2009/sep/13/junior-officers-reading-club-hennessey
according to the review features- among other things- just that.

Second World War soldiers had a pocket in their trousers just above the knee which became known colloquially as "The Penguin Pocket" as it was just the right size for a Penguin paperback. There was a book of verses issued to soldiers which had a fold over leather flap and button fastening (I'm sure I remember my father had a copy) and which surface from time to time these days. Most sellers are unaware of the provenance.