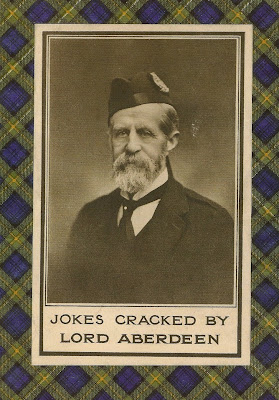 This book has honourable mention in 'Bizarre Books' by the wacky duo Lake and Ash. It is in the section 'Against all odds / Titles to make the heart sink.' I just bought a decent variant copy of the 1929 first edition for £15 from an Oxfam shop (via Amazon) and the cheapest now available is £30 with one chancer asking £125. Len of the Chines, normally angrily overpriced, wants £45 for his decentish copy with the gilt thistle on the cover. Other titles in this section of 'Bizarre Books' include 'The Wit of Prince Philip' 'Songs of a Chartered Accountant' 'Not Worth Reading' 'The Bright Side of Prison Life' 'A Holiday with a Hegelian' 'Along Wit's Trail: The Humor and Wisdom of Ronald Reagan' and 'Cameos of Vegetarian Literature'. This might just be a growth area in collecting...

Here for the moment is one of Lord Aberdeen's jokes entitled 'Another Irish one':

An Irish Census recorder on enquiring - 'How many males in this house?' received the reply - 'Three of course; breakfast, lunch and tea!'


As the foreword notes ' In the realm of wit and humour, Lord Aberdeen is a name to conjure with... the publishers have great pleasure in introducing to the public a few of his gems.' There is a ribtickling short ghost joke where a man shoots off his foot thinking it is a ghostly hand, a girl from Aberdeen who kept quiet about where she was from because her 'mither' told her 'Noo Annie be sure and dinna boast.' There's even a good book joke that would probably have them speechless on the Edinbugh fringe:

'A certain man had built and furnished a new house and was showing it to Cardinal Cullen who was accompanied by Father Healy. In one of the rooms, on a shelf above the writing table, there stood a neat row of books. Pointing to them the owner said "These, your Eminence, are my friends." But Father Healy chimed in (wait for it) "Yes, and he has treated them like friends; he has never cut them.'

As Dr. Spooner would say, "Lord Aberdeen is a shining wit."

I think we should start the webring of people who posted to this site.

Reminds me of a book called "Let's Try Scottish Cooking!" with a picture on the front of a fellow in a kilt, looking considerably less animated and fresh than Lord A. here, about to spear a haggis, all rendered in sickly grey-tinged color.