Now that Brick Lane, hitherto best known for its curry houses and Indian grocers, is becoming, with new boutiques and ethnic food stalls, an annexe of Camden Market, perhaps the twenty-somethings who flock there every Sunday to chomp their Thai noodles will notice as they emerge from Aldgate East station the blue plaque high on the wall of the adjoining Whitechapel library that commemorates its association with perhaps the most original of the First World War poets, who died at just 28. I 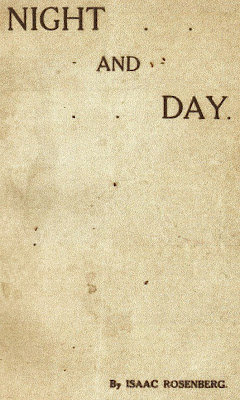 saac Rosenberg, born into a Yiddish-speaking family, soaked himself in English poetry in this library and the fruit of his desultory reading was his debut collection Night and Day, of which only fifty copies were printed.

Unlucky in many respects—especially in his background and early education—Rosenberg was very lucky in his patrons, who ensured that his writing got an audience. Reuben Cohen, a radical in an era of anarchist plots and nascent Socialism, was one supporter, while his boss, Israel Narodiczky, who from his works in 48, Mile End Road, became the leading Yiddish printer in London, was another. For an auto-didact like Rosenberg the publication of Night and Day was an act of bravado by a tyro in the English language who was just struggling to express himself in verse. Though his collection hinted at an emerging talent, echoes of Rosenberg’s favourites among the Romantics and Victorians are more obvious still, which may partly explain the failure of the book to make any impression on the literary editors who were sent copies. Even the attempt by Rosenberg’s friend Joseph Leftwich to sell the book outside Toynbee Hall failed to produced a single sale. So, in the end, like many another first-time, self-published writer, Rosenberg gave away the entire edition to editors, friends and relations. But those who inherited copies from the original recipients should have cause to feel grateful. This modest looking pamphlet of twenty-four pages will today fetch over £5,000. That’s if you can find a copy.

Rosenberg’s printer Narodiczky was an interesting character too. His bread and butter work was producing largely uncontroversial texts in both Yiddish and Hebrew, that are avidly collected today, but he also had radical sympathies and his home in Mile End Road, just around the corner from where radicals in 1910 were involved in the Sydney Street Siege, was the meeting place of anarchists and other political rebels, and he narrowly escaped prosecution himself for printing a large edition of a seditious newspaper in Italian, pleading ignorance of the language as defence against complicity in sedition. His anti-establishment credentials were such that in late 1915 D.H.Lawrence and John Middleton Murry persuaded this ‘ little Jew’ to print 250 copies of their pacifist magazine The Signature for £5. Only 3 issues actually appeared before lack of interest and suppression by the authorities caused it to fold. Today, Simon Finch will sell you copies of these three issues for a mere £700.

At about the same time Narodiczky also printed Rosenberg’s second collection, an eighteen-page pamphlet entitled Youth, in an edition of around 100 copies in paper covers, for the sum of fifty shillings. This time, it had become immediately obvious that the War 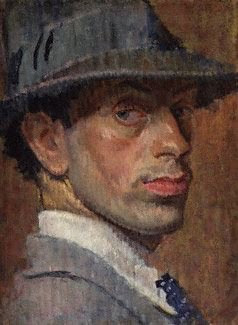 had hurt Rosenberg into becoming a poet of real power and originality and he immediately sold 10 copies at half a crown each.

Narodiczky must have been sufficiently impressed by the relative critical and commercial success of Youth to allow Cohen, under the imprint of The Paragon Printing Works, to use his own machines to produce Rosenberg’s play Moses for nothing in 1916. Patron and poet hoped to recoup the costs by selling some hardback copies for 4s 6d. In the event, most of the sheets were bound between bright yellow card covers and sold for a shilling, although, as with Night and Day , many were given away by Rosenberg.

Today, of all the First World Poets Rosenberg is regarded as having the most arresting voice, and poems such as ‘Break of Day in the Trenches’ and ‘Dead Man’s Dump’ from Youth frequently feature in printed anthologies and on WW1 poetry sites. Accordingly, a demand for the two excessively rare collections is perhaps stronger now than it has ever been. At present, there are no copies of Night and Day on ABE , but four copies of Youth can be found, at prices ranging from $500 to $750, which is a reflection of the fact that there are twice as many copies of this title than there are of Night and Day, although Youth is many times a better book. Ludicrously, three of the American dealers have Rosenberg die at the age of 18, which makes him a rival in precociousness to Daisy Ashford. Do the maths !! One of these innumerate dealers does manage to correct the poet’s age at death while offering a lovely presentation copy of the slightly rarer Moses, complete with publisher’s corrections, for $3,000. [R.M.Healey]

Thanks Robin. A few added notes: I have admired Rosenberg's poetry since buying a copy of 'Night and Day' with an original poem written by him on the title page. It was also a signed presentation to Laurence Binyon (himself no mean war poet.) As I recall it went to a dealer in California for a fattish sum 20 years back. Israel Zangwill's copy with 'holograph corrections' made £2000 in 1981 at Sothebys - this was the last copy to go through the rooms.

His paintings and drawings are also very desirable and highly skilled, he studied at the Slade with a distinguished peer group that included David Bomberg and Mark Gertler, as well as Stanley Spencer, Paul Nash, Edward Wadsworth and Dora Carrington. His self portrait above reminds me oddly of the late film- maker Derek Jarman. Am I mad? Rosenberg's art is very seldom offered for sale. At some point in the 1980s we bought some books from the estate of Rosenberg's friend and biographer Joseph Leftwich--there were no drawings but several copies of 'Poems' (1922) in the blue jacket. This still not a scarce book and $1000 copies are to be strongly avoided. A few lines from that magisterial work:

A man's brains splattered on
A stretcher-bearer's face;
His shook shoulders slipped their load,
But when they bent to look again
The drowning soul was sunk too deep
For human tenderness.

'His self portrait above reminds me oddly of the late film- maker Derek Jarman. Am I mad?' You are not mad but it is DJ's friend and fellow artist Andrew Logan who most resembles the poet.
Sandy

A fine poet and a fine man.

The self-portrait is evocative: Rowan Atkinson would play him well I think.