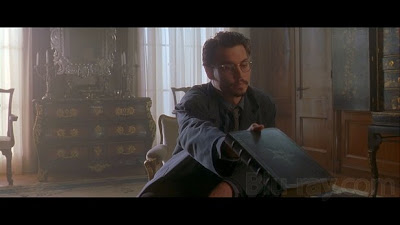 The indigent bookseller. A low key bookscout of no fixed abode. Sleeps in the back of his car or in flyblown motels or occasionally on fellow dealers floors or in lockups. His car is a disgrace but just passes legal tests. Keeps his books in a storage unit (U Storage) where he is perpetually in danger of missing his rent. There is always a character like this in John Dunning's excellent bibliomysteries and he normally comes to a sticky end. Occasionally he finds a sleeper which he runs at a quarter of its value or persuades a fellow dealer to put in on Ebay and go halves. Invariably male, mostly American where the climate is more conducive to being a bum. He has, as Groucho would say, 'worked his way up from nothing to a state of extreme poverty.'

The grandiose bookseller. Has a fine mansion downtown or a showoff country estate (seldom both, booksellers are not hedge fund managers.) He may have horses, pools, tennis courts, a taste for antiques, vintage wines, brand new luxury cars and exotic travel. Because bookselling does not generally support this lifestyle he quite often goes broke and all his books are sold off in auction at sobering prices.

The humble bookseller. Sometimes known as the 'mere man' (at one time we had bought a rather prestigious collection full of fine bindings, literary first editions and scholarly works and a dealer seeing these asked 'Do you have anything for the mere man.') He does small provincial fairs has an eye for a good military, naval or transport books--he will sometimes plump for Noddy, Ladybirds or Observer books or New Nats. He tends to sell his good books to specialists but has now discovered the internet and is perplexed as to pricing--if he puts the book too low it will go like a bullet but if he charges what everybody else is charging the book never sells. He knows books that will sell well at £10 on Ebay, has a roof over his head, a car that is properly insured and taxed and generally enjoys the chase. He is not to be confused with his close relation see 'the teabag bookseller.'

The pompous bookseller. Has a broad knowledge of the ancient world, can quote Shakespeare and even Dante (in Italian). Sometimes went to Oxford or Harvard and will remind you every four minutes. When classical music is playing he immediately names the piece and may even start to conduct it. His books are priced within an inch of their lives but he will give deep discounts to anyone half interested; such is his bravado, chutzpah and charisma he can usually buy well from estates, fellow dealers and widows. Usually somewhere along the line he has had an amazing buy that made him take himself pretty seriously or he may have inherited a large sum from a doting aunt. He seldom goes broke and as Oscar put it -'he has no enemies, but is intensely disliked by his friends.'

The raffish hustler. Another almost exclusively male type. A bookdealer with a colourful, sometimes dark past. Born in a mansion or from a semi in Barnet, he may have been in rock music or owned a night club, sometimes there is a spell in rehab or an over acquaintaince with the bottle. Broken marriages, bankruptcy and banishment are not unknown. Possessed of fiendish intuition, deep and recondite knowledge he wades through the world of of old books finding great treasures but tends to squander the money on pleasure or occasionally takes a big loss on books that turned out wrong. He is optimistic by nature. Keith Richard is sometimes mentioned but this guy tends to be wirier and possible a little wiser but never as wealthy. When on the skids fellow dealers or wealthy collectors bail him out and he is never down for long. He can sometimes hustle himself to near the top of the trade, relies heavily on luck and serendipity and is much admired by other dealers who lack his bravura. He is closer to the indigent type and never pompous...
Posted by Bookride at 9/28/2009

which type are you?

'umble, ever so 'umble...will do some other types and may cover myself there--but possibly I am the traveller in middle years lost in the dark wood -just as Alighieri put it--

Oh Nigel, perhaps out of an excess of civility, you missed the 'Extraordinarily Rude Bookseller' - you discussed a few classics of the genre a few posts ago.

I suppose you know the marvellous Sir John Squire story about a book scout who finds a Shakespeare manuscript? (For those who don't know, it's in the Grub St Entertainment collection)

Nice still of Corso from the Polanski's Ninth Gate. A right load of entertaining hokum. Which type would you have Corso down for?

(Good dialogue at the start of the film where he's picking over some unfortunate's books who can 'no longer enjoy them' .. offers them a mere few thousand to take an Ibarra Quixote off their hands and suggests they hang onto their Hypnerotomachia Poliphili as it'll always go up in price..)

Have added a fifth type to cover Corso of the ninth gate-- can't quite remeber what he was like but am sure he was hustler of some sort...N

I could name some of these booksellers, but won't.

I think quite a few Humbles turn into Teabags over time, as their stock gets picked over and they fail to adequately replenish. I see these bookshops all the time; I just visited one in Melbourne that was probably pretty good once upon a time.