MODERN FIRSTS / POLITICS
The pages of Viz magazine are the last place one would expect to come across that famous photograph of the enfant terrible Wyndham Lewis smoking a cigarette, but there he, in a recent issue, in a mock ad for fags, unidentified by name and described ludicrously as a ‘fop ‘.Viz has always had a sophisticated readership ( the late Tory MP Alan Clark was one subscriber ) and so I expect that quite a few Viz readers would have recognised the photo of the thirty-something artist-writer, if not the description of him. 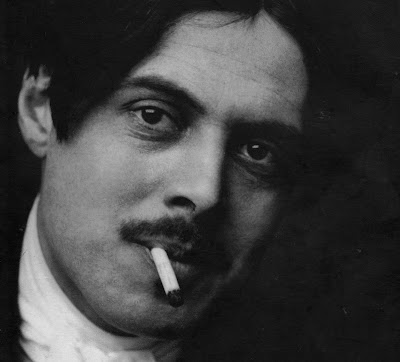 I feel the mocking, rather surreal, often puerile, and always mischievous, humour of Viz would have appealed to the author of the 'Apes of God' and 'Tarr', who was always good for a well-aimed swipe at the pretensions of pseudo-intellectuals and the inanities of pop culture. And now, it seems, after decades of comparative neglect, Lewis is in danger of becoming cool. The revival seems to have started in 2000, with the publication of Paul Edwards’ magisterial critical work and Paul O’Keeffe’s equally brilliant biography ( which features the famous fag photo on its cover ); a well received exhibition at Olympia was followed in 2007 by another at his old school of Rugby, and last year an acclaimed exhibition of his portraits at the NPG attracted a record 38,000 punters. Now the Net seems suddenly teeming with Lewis posts covering not only his art, which has always been admired ( Brian Ferry and David Bowie are collectors ) but also reassessing his hitherto neglected writings, which although condemned by Martian poet and Bill Oddie lookalike Craig Raine as ‘ unreadable ‘ are perhaps ( if some of the postings are to be believed ) finding a new, young audience.

Although, despite being amazingly prolific, Lewis never made much money from his writings, mainly because his books were printed in small editions. Consequently, all 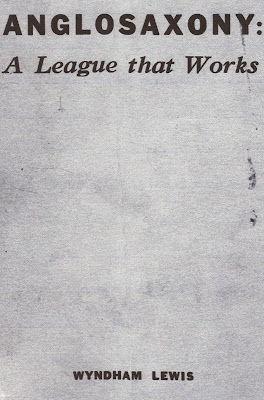 titles are hard to find, at least in the UK. It didn’t help that some titles were suppressed before publication or, in the case of 'The Doom of Youth', burned by order of the court as libellous. Around 350 copies managed to escape the flames, but the title remains a rarish, if not particularly sought after Lewis item. More worth looking out for is the booklet Lewis wrote while reluctantly exiled in Canada during the Second World War. Copies of 'Anglosaxony—a League that Works', which the small Ryerson Press in Toronto published in 1941, are as scarce as female readers of Lewis—which is a pity, because it is one of the writer’s most interesting publications. In it he condemns the Fascism he had flirted with a few years earlier and set outs in orderly fashion all the points in favour of British democracy, including its electoral system, the tolerance of Britons and the political advantage the UK has as a sea power. The ‘ pamphlet ‘ ( as Lewis called it ) was pretty well ignored by the newspaper press in Canada, despite the efforts of Lorne Pierce, the literary editor at the Ryerson Press. A follow-up book was submitted by Lewis to another publisher, but never published.

I’ve only ever seen one copy of 'Anglosaxony', and that was in the collection of the Canadian journalist and Lewis uberfan C. J. Fox , who had been smitten by the writer’s work as a teenager in the early fifties. Back in 1993 I had interviewed him about Grigson and Lewis in his tiny flat in Sydenham, where he proudly conducted me around his marvellous collection, which also included original artwork and letters. Only now has this resource found a permanent home -- at the University of Victoria, British Columbia ( which also has the Betjeman papers ).

It is not certain exactly how many copies of Anglosaxony were published, though the print run would probably have been small. Lewis was not well-known in Canada and it is likely that all those newspaper editors who were sent copies regarded the book as mere propaganda and therefore not worth keeping. Their descendants may be regretting this now. There 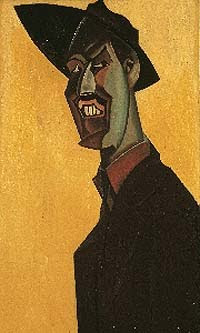 is no copy on ABE at present , though a recent reference work on Modern Firsts values the book at £750. Lewis himself asked for an advance of $50 ! [R.M.Healey.]

Thanks Robin--from a purely commercial point of view Lewis is (imnsho) risky--he goes in and out of fashion, some of his 20s and 30s works are common even in jackets (he was a greatly collected author in the days when Rota, Bell Book and Radmall and Serendipity ruled the roost.) Good to hear he is coming back however -- as one reader says at Amazon 'Make no mistake, the guy was a fascist and a raging misogynist' but he was most certainly not a fuckwit like so many collected authors sold by the newer modern first gang.

As for fascism, as Robin notes, he changed his mind by 1941. His Paris based novel 'Tarr' is a good start if you are minded to dip into him - a book high in the modernist canon for its attack on English individualism, its jagged Vorticist style, its punctuation--another Amazon reader recommends it as a 'beach read' warning however that it will 'somehow manage to kick sand in your face.' Lewis revised the book twice but the 1918 original is the goods. He was a great and prolific painter and his pictures used to occasionally turn up underpriced. As for his puce monster BLAST (1914) I have a customer for both issues in good shape. Ship and bill.
Posted by Bookride at 9/07/2009

Thank you for this - I'll be looking through the bookshops and thrift stores of Ontario with renewed effort.

A small clarification, if I may: had the Ryerson Press been located in London or New York it might not have seemed terribly big, but it was one of the larger Canadian houses - right up there with McClelland & Stewart and Macmillan of Canada. Its sale, in 1970, to McGraw-Hill (becoming McGraw-Hill Ryerson) is still seen as a tragedy in these parts.

You're spot on concerning Lorne Pierce and his belief in the pamphlet. In 1941, Anglosaxony was featured alongside works by A.J. Cronin, William L. Shirer and Paul Gallico in Ryerson's Christmas gift giving advert. (I've posted it here for those who are interested).

I used to get him confused with the funny writer D B Wyndham Lewis -- ---this guy seems more serious!

'I used to get him confused with the funny writer D B Wyndham Lewis -- ---this guy seems more serious!'.

A witty and interesting account of a scarce book. But why does the writer in blue assume that an Amazon blogger knows what s/he's talking about on Lewis's politics? I'd like to see the evidence for WL being "a fascist". Membership? Not of Mosley's organisation, for a start. And as for misogyny, read his great female characters, Anastasya in "Tarr", Margot in "Revenge for Love", and Hester in "Self Condemned". And calm down.

For some time now I've been writing about Lewis's interest in anarchism and - yes - Marxism. It's part of the revival of his reputation that people are beginning to take notice. Booksellers need to know about this change - they might sell more of Lewis!

I take your point about WL's politics, Alan. What do they know on Amazon? !

Good luck with his rehabilitation/ revival. As a bookseller I have found him easy to sell to readers (esp the Black Sparrow reprints) but hard to achieve great prices for the 'mod firsts'.