A miniature piece of Bloomsbury history - this small bookplate by Dora Carrington measures 1 3/8 inches high by 1 3/4 inches wide in it's largest version. The large version is rarer than the smaller but both have now become quite elusive. The tiny postage stamp size one measures only 1" by 3/4 ". Both have the words Lytton Strachey in a plaque or cartouche with folded edges surrounded by net-like cross hatching in a dark sepia tone.

VALUE? Bloomsbury specialists tend to charge £150+. They can occasionally be found at less than £100. I once had a supplier for the plate who had one in every volume of Strachey's OED. Bloomsbury collectors tend to be fervent in their pursuit of material so they seem to have all sold. It is so small that I lost a couple. Strachey was a keen collector of antiquarian books so it can turn up - usually in valuable items. An early work associated with Strachey is 'Euphrosyne.' We catalogued one a while back thus:


Large 8vo. 90 pages. Ur Bloomsbury. Poetry in a ninetyish style with an interesting long poem ‘At the Other Bar’ about a a disappointed drunk and other poems on 'Dreamland', 'Water Spirits' 'The Trinity Ball' 'Andromeda' etc., The poem 'The Cat' is known to be by Strachey as are a few others, the poem 'Song' by Lamb is addressed to a Duchess. A collection of verse and translations from French published in the summer of 1905 - as Quentin Bell says in his biography of Virginia Woolf '...they seldom alluded (to it) in later life so that the book would have been forgotten if Virginia had not managed to keep its memory green...Virginia laughed at it and began a scathing essay upon it and its contributors...' Indeed she used the name 'Euphrosyne' for a ship in her first novel "The Voyage Out.' In her unfinished May 1906 essay on the book and the Cambridge set behind it she wrote '...some few songs and sonnets were graciously issued to the public some little time ago, carelessly, as though the Beast could hardly appreciate such fare, even when simplified and purified to suit his coarse but innocent palate...it was melodious ...but when taxed with their melancholy the poets confessed that such sadness had never been known & marked the last and lowest tide of decadence.'

In our last copy a pencilled note by a bookseller stated the book came from the collection of Raymond Mortimer and Francis Birrell - the only other time I have seen this book was in the collection of Dadie Rylands. Although VW mocked the writers for their 'overweening seriousness' this is a fascinating piece showing the very earliest manifestation of the Bloomsbury set as a coherent group. It is a book unlikely to surface outside of Bloomsbury writers collections and is decidedly scarce.

I heard of a third copy going through CSK at the sale of the library of Lytton Strachey’s sometime lover Roger Senhouse (1899-1970) who was a translator of Colette and a partner in the publishing business Secker and Warburg. Interestingly that was a famously botched sale from the 'chinless' of Christies-- almost all the books were in tea chests and contained incredible Bloomsbury rariana, signed Virginias, Hogarth & Omega Press, scarce Continental presses and a batch of presentation George Orwells. A lot of the books went for very little and ended up with the celebrated and unlettered bookseller George Jefferys, who knocked them out on the pavement at Farringdon Road - pretty much as you see in our signature photo top corner of this web page. A friend who got a few chests was surprised when Cyril Connolly turned up at his premises (with entourage) wanting to buy from the collection. 35 years later you still see Senhouse books with his small neat pencilled ownership signature. He had the admirable habit of compiling indexes in books where the dastardly publisher had been too lazy to include one.

The photo above shows the beautiful Emma Thompson and Jonathan Pryce in 'Carrington' the best of Bloomsbury movies (most are poorish vide 'The Hours' and 'Mrs Dalloway') - Pryce was an exceptional Strachey and Rufus Sewell a fiery Mark Gertler. Sample from the script - Gertler is very pissed off that Carrington is in love with Strachey:


The above dialogue brings to mind the lines at the end of 'Some Like it Hot':


VALUE? I have had 2 copies in 30 years both from old Bloomsbury types. This generation have now almost all died. In a list of Leonard and Virginia Woolf's own library (4000 books at Washington State) it is noted they had 2 copies, seemingly both bound up by Virginia. The book is preceded in the Lytton Strachey canon by Prolusiones Academicae (1902?) which is hideously scarce and probably slight. 'Euphrosyne' is a true sleeper and I feel bad about awakening it, my excuse is that it is too uncommon to have any real currency, also there are other Bloomsbury sleepers of greater value that can remain, forever, sound asleep. Think £1500 and above. (pic below Virginia Woolf and Angelica Garnett - her sister Vanessa Bell's daughter by Duncan Grant.) 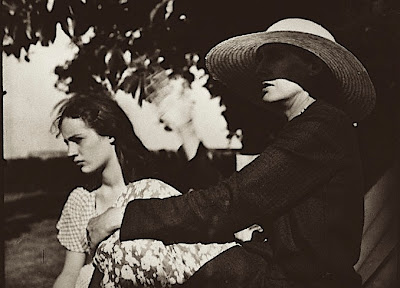 COLLECTING BLOOMSBURIANA. There are some of the opinion that the entire coterie did not produce one masterpiece, some point to Virginia Woolf as a proven writer of world class books. Some talk of Maynard Keynes as a genius, certainly his name has been invoked enough in the current slump. Huge claims can be made for E.M. Forster. A fellow dealer opines that Bloomsbury collectors are the maddest of the lot. Most would not have been welcome at Charleston or Monks House.

OUTLOOK? The Bloomsbury industry is mostly about gossip, drama and romance --Vita and Virgina, Vita and Harold, Vita and Violet, Dora and Lytton, Vanessa and Clive, Vanessa and Duncan and then there's bad boy Bunny Garnett...tangled relationships, posh backgrounds, country estates, the pursuit of sexual freedom, the desire to shock the bourgeois, high intellectual ideals - they will be collected until the Kingdom comes, prices already high, will probably rise...
Posted by Bookride at 9/28/2009

I once had a copy of Strachey's label in a book (no recollection of the title, but it was rather fetchingly bound in glazed pink moiré cloth) that I found in the large ground floor back room of Francis Edwards on Marylebone High St. Paid £1/1/-. No idea what became of the book, either.

Glazed pink moiré cloth--that sounds like one of Virginia's own bindings! See if you van find it you zany bunny. Trish

Oh dear! You could well be right. The binding was not decorated or lettered and had no spine label. No idea where it went or when, but I must have sold it. Quite likely to Rota in their Savile Row days. Easy come .... I shall spend the remainder of my conscious life worrying about it.

I also bought a copy of the 1888 Walt Whitman Complete Poems & Prose, signed, at the same time from Edwards for £2. Do know where that went.