I am not sure which books backpackers carry with them these days so this list may be a little out of date. The concept of backpacker books goes back to the days of the hippy trail when travellers would carry such classics as the I Ching, the Tibetan Book of the Dead or anything by Herman Hesse. A backpacker classic should have an element of profundity, preferably mystical -if not it should have cult status or be a statement about who you really are. There is an element of self discovery in setting off - the path to enlightenment, the journey inwards...A backpacker book is not a 'beach read'--the book must be worth the weight and space it takes up and should be reverentially handed on to other travellers or left in a hotel or bus station for another seeker to chance upon. I have garnered this list from my own experience of buying books from travellers, various lists on the web (one at Amazon) and an enormous thread about which books people would leave on a bus. In no particular order here goes: 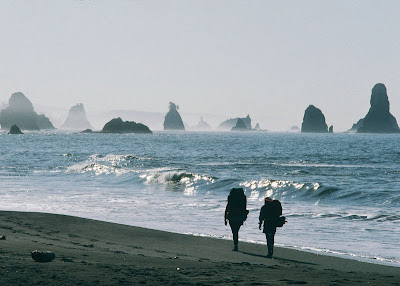 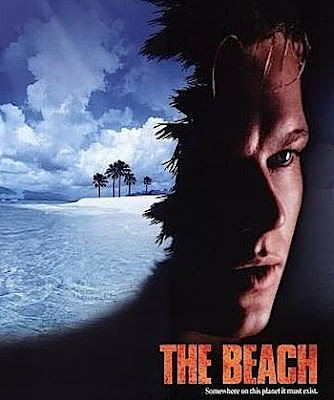 Thomas Mann. The Magic Mountain (for the backpacker of the past, the wandervogel with his rucksack on his back...)
Gabrial Garcia Marquez. One Hundred Years of Solitude
George Eliot. Middlemarch (panorama of history category -still popular)
James Joyce. Ulysses (Odyssey thin paper version)
Joseph Conrad. Heart of Darkness (a short story so add 'Lord Jim')
Tolstoy. War & Peace
Gunter Grass. The Tin Drum
Kahlil Gibran- The Prophet (“Keep me away from the wisdom which does not cry, the philosophy which does not laugh and the greatness which does not bow before children.”) NB there is a spoof by 'Kellog Allbran'
Jules Verne. Around the World in Eighty Days (why not?)
Patrick Suskind. Perfume
Umberto Eco. Name of the Rose( also Foucault's Pendulum)
Virginia Woolf. To the Lighthouse
Irvine Welsh. Trainspotting.
Borges. Fictions
Tolkien. The Hobbit (sometimes seen read until it has fallen apart)
Bolano. The Savage Detectives (heavy)
Dan Brown. The Da Vinci Code (light)
Maldoror & A Rebours (for the decadent traveller)
Shakespeare. King Lear ( a teacher at my school read it every morning or so he said)
The Duke of Pirajno. A Cure for Serpents (for the traveller in Libya)
Di Lampedusa's deathless 'The Leopard' - another book by an Italian duke. Why can't any of our dukes write a decent book?
Tao te Ching
Popol Vuh: A Sacred Book of the Maya
Cormac McCarthy. All The Pretty Horses
Perec. Life - A User's Manual
Melville. Moby Dick.
Richard Bach. Jonathan LIvingstone Seagull
Emily Bronte. Wuthering Heights (probably has added resonance read on a coral strand in Tahiti)
Aldous Huxley. Brave New World
Wiliam Golding. Lord of the Flies (file under 'dystopian travel')
Louis de la Berniere. Captain Coreli's Mandolin (if you insist)
Bulgakov. Master and Margarita (Mick Jagger's favourite book)
The Story of O (for the erotic traveller)
Donleavy. The Ginger Man.
Robert Anton Wilson. The Illuminatus Trilogy
Baghavad Gita
B.S. Johnson. Travelling People 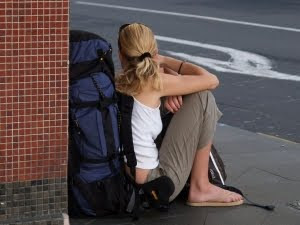 I remember seeing a guy at Milan's cathedral like central station sitting on the steps half way through John Livingston Lowes' 'The Road to Xanadu' - a weighty study of how Coleridge came to write his greatest poems. It seemed a good choice for a book to read on a journey -- as Toby Litt says "...its argument, that Coleridge had one of the most extraordinary minds the world has ever seen, is there on every page." He seemed oblivious to the rest of the teeming world lost in Lowes' deep investigation into the creative process. Wherever he was heading from Stacchini's gargantuan stazione ('bombastic splendor') he had good company for a 1000 miles or so. Bon Voyage or 'Latcho Drom' as the gypsies say.
Posted by Bookride at 9/12/2009

Please add "Midnight Express" and "The Sheltering Sky" so these people will stay home and go to Disney world instead.

Too many backpackers as it is.

The big backpacker book these days is called Shantaram. It's the size of a cavity block and it's everywhere.

How about Ram Dass' 'Remember: Be Here Now' - a pun on the 'spiritual journey' many wish to take with a backpack in tote.

I very nearly put Ram Dass's book in. I have actually seen people reading it on the move, but not for a while. I once saw him give a reading in Santa Cruz and he seemed to lack the shakti needed for that kind of work. The gnomic Tolle has the same message but developed it broader and deeper and has reaped the whirlwind in the meantime...thanks for all input especially news that the 900 page Shantaram is the Siddharthta of 2009.

The Road to Xanadu is a wonderful book but it's almost the opposite of a road book- it shows how other people did the travelling but Coleridge stayed at home and did the reading.

Around these parts you would have to add Tom Robbins, "Another Roadside Attraction". Also, I think the Kesey should be "Sometimes A Great Notion".

Found at a shelter on the Appalachian Trail:
Charles Bukowski, Hot Water Music

How about Into the Wild by Jon Krakauer? The movie by Sean Penn is good too.

Funny, I just went on a backpack trip and took Siddhartha with me...

Blame BoingBoing for the influx--I'm disappointed: No "Hitchhiker's Guide to the Galaxy"? No reassuring DON'T PANIC! in big friendly letters?

As for The Story of O, bugger that; doe-eyed trembling wanna-be S/M; Better to take just the Song of Songs out of the KJV--I'm telling ya those Isrealites knew good erotica. They included it in their holy writ!

i was just on the road for a month, reading in my tent my headlamp.
i went through the first two "Abarat" books by Clive Barker, and then moved onto Shantideva's "Way of the Bodhisattva". The Abarat books were a little bulky, so i mailed them to my gf with letters and other ephemerea tucked in as i finished.
Shantideva's book will make you want to stay in the woods, if you don't already.

Perhaps modern backpackers are better educated than you.

How about William Sutcliffe - Are You Experienced? IMHO the ultimate anti-backpackers novel :)

Anything by Paul Theroux or Bernard Cornwell.

I must put in a plug for the ultimate sci-fi novel for the youthful wanderer: Child of Fortune by Norman Spinrad. It's out of print, but you can find it around, and the copy I have has been cherished and signed by many an adventurer...

For myself I find the book I travel with most is Whitman's Leaves of Grass. In those quiet times, surrounded by the poetry of nature, Whitman's cosmic train of thought poetry seems to be the perfect read

Goodness me! I want to suggest anything by Max Beerbohm, who wandered round rooms quietly closing any that that were open - or anything by Stephen Potter, particularly the wee volume (can't mind which) which includes his mountainmanship tactics - backpackers are like climbers, natural oneupmen forever going on about Thailand in Autumn or the Eiger by moonlight.

I once finished reading Charles Williams' The Place of the Lion late one summer evening, coming down the Sgurr na Gillean 'Tourist Route' - it seemed somehow appropriate in the fading light, strange shapes and forms lurking in the lengthening shadows!

What? No Muir? I hiked the Pacific Crest Trail in 2008, and I took John Muir's "My First Summer in the Sierra". My modern transportation book is a compilation of E.E. Cummings, Virginia Woolf, Paul Fussell, and others.

I would add Chatwin's Anatomy of restlessness

No Infinite Jest?
There is a book that will see you through some long trips.

Such a large list and no Hemingway. Maybe For Whom the Bells Toll, a nice lightly tale about the Spanish country side. Also highly endorse In Search of Captain Zero: A Surfer's Road Trip Beyond the End of the Road by Allan Weisbecker though a lityle depressing by the end of the book.

Huh, I just went backpacking with Pirsig's "Zen and the Art of Motorcycle Maintenance" AND Hesse's Siddhartha... and one of my comrades was reading Kerouac's "On the Road." All three are excellent choices.

The Illuminatus Trilogy is one of my faves.

I just got done with the PCT Oregon. My books included
Edward Abbey - Monkey Wrench Gang
Edward Abbey - Hayduke Lives!
Daniel Quinn - Ishmael
Daniel Quinn - My Ishmael
Jack London - Call of the Wild, How to build a Fire, Love of Life, To the Man on Trail
Henry David Thoreau - Walden
Jon Krakauer - Into the Wild

I suppose if all your backpacking is serious hiking...but if you were hitchhiking in the 60s and 70s, the most obvious book to have around:
Tom Robbins' "Even Cowgirls Get the Blues".

I completely agree with Joost. And I would like to add:

Video Night in Kathmandu: and Other Reports from the Not-So-Far East, by Pico Iyer

I submit Against the Day by Thomas Pynchon. Really anything by Pynchon would be fine but since we are talking about traveling I figured I would go with the longest.

The fact that this list doesn't have the Hitchhiker's Guide to the Galaxy series pretty much voids it.

In search of captain zero by Allan Weisbecker

I like the books on his list but haven't really read them during my round-the-world trip. Still travelling now and actually just posted a list (with plot summaries) of my favorites that I read on the road: http://legalnomads.blogspot.com/2009/09/best-books-ive-read-on-my-round-world.html. I agree that Shantaram is the ubiquitous book of the moment; everyone and their mother seems to be lugging it around!

Ada by Nabokov. Took me across Malaysia.

The Patagonian Express got me hitchhiking across India and Pakistan.

While Dark Star Safari was pushed into the end of my sea kayak off Alaska.

i would need to second Hemingway. "the sun also rises" has my favorite scenes from any book as he travels to spain for the bullfights. lots of drinking which seem to accompany most of my backpacking as well.

while I've passed my copy of Shantaram on to travellers, pound for pound I would recommend Vikram Chanda's Sacred Games if you're going to carry around a 900 page novel. Epic in scope, truely a modern masterpiece.
Rushdie's Midnight's Children also deserves a place on the expanded list.

The Sorrow of War – Bao Ninh

Apart from Tom Robbins and Daniel Quinn's Ishmael (if one wants a heavy read), I feel Hunter S. Thompson's 'The Rum Diary' deserves to be considered for the list.

For a massive and mystical masterpiece, try Cowper Powys "A Glastonbury Romance"

It would be narcissitic of me to suggest "Moods of Future Joys", so instead I will recommend:

- As I walked out one Midsummer's morning (Laurie Lee)

Thanks for all the cool ideas!
Al

You've missed the most obvious, from your ex-Sotheby's co-habitue Bruce Chatwin, "In Patagonia". Are the 80's that far forgotten?

The Soul Trek about soulmates in Nepal.

Twenty-something by Paul L'Estrange if you're looking for something very different. It's about life on the backpacking trail and it's a true story. Just finished reading it on my kindle. Amazing!