CLASSIC LITERATURE
I am briefly revisiting' Emma' as there is a new BBC series with the handsome actor Romola Garai. Also a mediocre copy made $8,400 in New York last month possibly indicative of a flatter Janeite market. The auctioneer notes '...in keeping with Murray's stated views on edition sizes, 2000 copies were printed. Emma is also the only one of Jane Austen's novels to bear a dedication (to the Prince Regent)' . The lightest of her works and often cited as her most accomplished, fulfilling, as it does, her own formula for a successful novel - '3 or 4 families in a country village..the very thing to work on.' Many editions are wanted apart from the expensive 3 decker first, including the still valuable one volume Bentley (1833) fancy illustrated editions (Hugh Thomsom, Chris Hammond) Avalon Society, Limited Editions Club, Folio, Easton etc., Possibly the most wanted and easiest assimilated book of the divine Jane. A bibliographic warning note comes from Geoffrey Keynes:

The novel has such a strong and true storyline that it easily transposed into an acclaimed movie set in a modern US high school in Beverly Hills ('Clueless.' ) Also filmed 3 other times and done on TV about once a decade. There is rumour of a Bollywood version. As noted 2000 copies of the 1816 first were printed -- it is uncommon to find the half titles and final blanks still present as it is more often rebound in leather lacking these.

VALUE? Has twice made £25,000 at auction this century, both times in original boards (usually slightly repaired/ restored.) A 'very fine' copy bound in 'half , calf gilt, extremities worn' made $24000 in 2002. Recently it has made as little as £5000 several times with a few disappointing 'buy-ins' at carriage trade auctions--usually for less than limpid examples. A decent copy lacking half titles made $11,400 early in 2009 in NY. It can be found in handsomely bound state at most high end book fairs and is not especially scarce. The Bentley one volume 1833 edition can make well over £500; people try to make sets of the Bentley editions which complete can go for several thousand pounds. Jane Austen books in reprint often attract buffoon like over pricing. One chancer in Atlantic City has a whole series of basically old and used turn of the century pocket editions, none worth more than $20, at $200 to $400. They don't appear to ever sell so there are pages of them on the net with other dealers following his witless lead -once again belying Blake's maxim that a fool will persist in his folly until he becomes wise. William Blake could never have foreseen the imbecility of the internet bookseller. What possibly happens, and this is true of many manic over pricers, is that very occasionally some deluded punter buys one of their books thus justifying the whole enterprise. 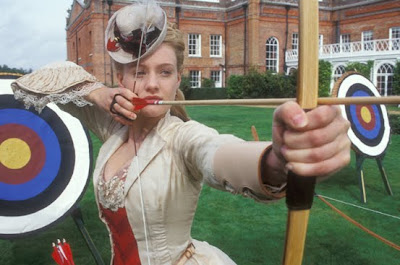 Sets of Austen are the most rebound of all sets in history. The reason is that unless you put an absolute 'mind at the end of its tether' price on them, they will always sell. They make the perfect gift, prize, reward or inducement. Hard to find a decent set of 19th century (albeit late) leather bindings for less than $1000. Modern 6 volume sets from Easton in a sort of spam leather can be had on ebay at between $300 and $500. Below is Gwynneth Paltrow as Emma - 'clever, pretty and self-satisfied...' That's Romola Garai above--actually in 'Daniel Deronda' but what the heck--one wonders if she would play her namesake if they adapted Ms Eliot's 1863 novel 'Romola'.

What a beautiful picture of Ms Garai-- must order the Deronda DVD--as you say What the Heck (surely there was there archery in Ms A's fiction?)

Jonny Lee Miller of course plays Emma's Mr Knightley, and a damn fine job he makes of it too. JLM was a great Woodrow Call in Dead Man's Walk; way up there with the incarnations of the older Woodrow by Tommy Lee Jones (Lonesome Dove) and James Garner (Streets of Laredo).