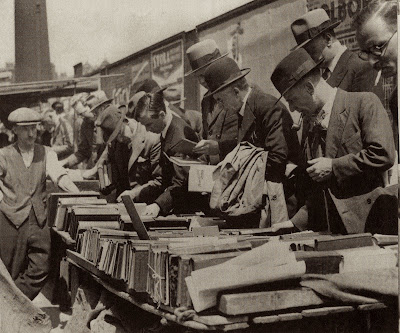 I’ve never met Martin Stone, legendary book-runner, but I’ve wanted to interview him since I first heard about him—I can’t exactly remember when—and have tried several times to get his address, most recently from an old drinking pal of mine in Birmingham-- Francophile and occasional blues busker, Charlie Mitton, caricatured as Bad News Mutton, one of the infamous Ketamine Kreeps of Iain Sinclair’s Landor’s Tower , whom I still occasionally meet in Brum. I might even have asked Sinclair himself or his friend Chris Petit, both of whom I’ve interviewed. I can’t exactly remember. Of these contacts Charlie, although ignorant of rare books, always seems most willing to help me in my quest, though the intelligence that Stone lives or lived somewhere near Pere Lachaise cemetery isn’t much use to me.

I suspect that any address in Paris divulged by Mitton is likely to be hopelessly out of date. Anyway, perhaps that’s the whole point about living legends—they take on the character of mythical beasts—you wonder if they actually exist. Surely, in my forty years of book collecting and 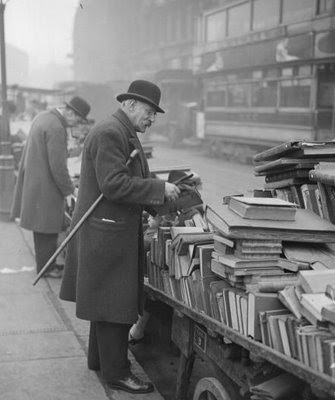 dealing I should have met Stone by now.

But runners, however elusive, are always fascinating figures. There must have been a few at George Jeffrey’s stalls in Farringdon Road, which I used to visit regularly throughout the eighties, having first discovered them as a teenager in 1968. There was one bloke—rather tall and dishevelled—who I saw on each visit. He’d arrive on a battered-looking bike wearing a flat cap which was painted with white gloss—and he stood out from the other recognisable dealers who patronised the stalls . Having seen a photo of Solomon Pottesman recently I was reminded of him, though ‘Potty ‘, or ‘Inky’ as he was nicknamed, seemed to be shorter, and anyway died in 1978. There is a brilliant cameo of this very eccentric figure in Rare Books and Rarer People by F. O. Snelling, a former cataloguer at Hodgson’s, who regularly dealt with Pottesman and whose recollections of him are a mixture of exasperation at his eccentricities and real respect for his scholarship. 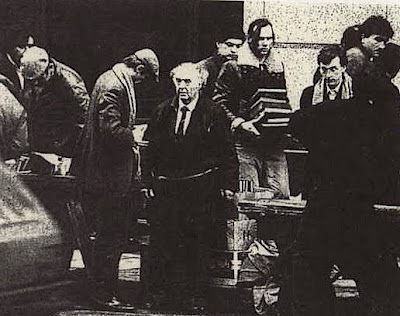 Was Potty a true runner ? To fix this label on someone whose obsession with incunabula meant that he would only sell enough non-incunabula books to pay rent and buy food, leaving him to spend the remaining profits on still more pre 1500 books for his own private collection ---would be stretching the definition quite a bit. But as he had no shop himself and sold directly to other dealers, I suppose he could be called a runner. [Photos show London's Farringdon road stalls in the 1930s and the 1980s.]

I assume that book runners have always existed. The annals of book dealing and collecting are full of characters whose hand-to mouth existence depends on their memory and instinct for a bargain. The Farringdon Road stalls attracted them from at least the 1870s, and many of the characters observed by Mary Benedetta in her wonderful Street Markets of London( 1936), with its photos by Moholy Nagy* , must have been runners. Bookshops and other shops too have also happy hunting grounds for those with the 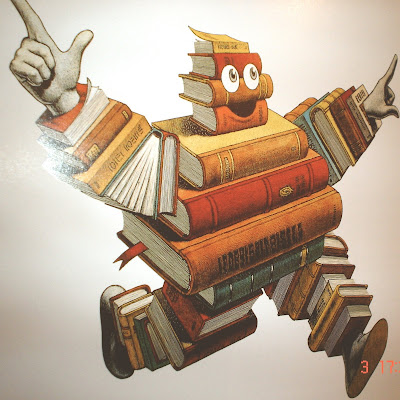 ‘ knowledge ‘. I like that story of the runner who discovered a tobacconist wrapping ounces of shag in what looked like pages from an ancient book and which indeed turned out to be ( if my memory serves me right ) an exceedingly rare early American book. More recently, I doubt if Bewick expert Nigel Tattersfield would care to be labelled a runner, but when he bought for £20 a scribal copy of Thomas More’s A Dialoge of Comfort agaynst Trybulacion from one of Jeffrey’s boxes in 1981 and sold it five years later for £42,000, he made the national news. Such luck is what every runner dreams of, but rarely ever enjoys. [ R.M.Healey.]

*(John Miles, London 1936)--photos by Moholy-Nagy and worth about £300 nice in jacket, half that for lesser copies sans jacket. Not scarce.

Wise words indeed Robin. The 'stoned one' (Martin) sometimes shows up in our shop and has even found books here which he has 'run' to more illustrious dealers, or just down the road to Cecil Court. These days he is a dapper figure in a stylish hat (the beret is long gone) ties from Charvet and an op-art suitcase with wheels. The case contains rarities 'scouted' in almost forgotten parts of Europe and at dawn markets in its great capitals.

The American equivalent of a runner is a 'scout' but they are subtly different. A 'scout' often searches for books for his own stock, whereas the runner almost exclusively sells to other dealers. Ideally he will have very little stock, often just the books that he could not sell (i.e. his mistakes.) There are one or two women, more in America, but it is mostly a male lifestyle. In general their lives go unrecorded; a few pop up in bookselling memoirs. There are several mentioned in 'The Bookshop at 10 Curzon Street: Letters between Nancy Mitford and Heywood Hill' edited by the great bookman John Saumarez Smith. Runners, as I recall, once even had a style of dress (seedy overcoat with string round the middle, also string used to tie the books) and cultivated themselves as 'characters' possibly for the benefit and amusement of the buyers (and customers) in grand shops. Some even ended up relatively rich, certainly Potty's library made a solid six figure sum...
Posted by Bookride at 11/16/2009

Have just finished - after much prompting from Joe - John Dunning's "Booked To Die", full of the deaths of book runners... thanks very much for that!

Joe? That should read "you".

Martin is indeed on Facebook looking more elegant than one could ever have imagined. On a recent visit to Paris I missed him by just a few minutes at Shakespeare's.

The photo of George at his stalls also caught me in the background with a teetering pile of books in my arms.
My bookshop Camdenlock Books is situated not far away from those long vanished stalls, in Old Street Station.

Is your bookshop a secondhand shop, Jason Burley? If do, it would be worth notifying http://www.inprint.co.uk/thebookguide/shops/index.shtml
for listing.

There is a rather good story about a book-runner in Squire's A Grub Street Night's Entertainment who finds the manuscript of Hamlet - fab.

Solly Pottesman was tall, but not dishevelled! He wore a flat cap, but did not ride a bicycle. He was well loved and is still remembered affectionately by his niece, great niece and nephew. Don't believe everything Snelling says; that man simply didn't get Solly's sense of humour. Solly was well respected by his peers for his encyclopaedic knowledge of incunabla - which as you say, meant he left a very valuable estate. But, he didn't do it for the money, but for the love of his subject.