Books Do Furnish a Room 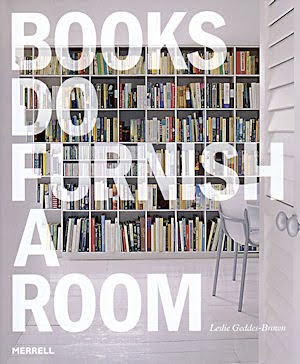 Interesting recent book (late 2009) from Interior Decorator writer Leslie Geddes Brown. It can be had at various book malls from about £15 inc postage. Like a lot of I.D. books it is fairly easy on the brain but the writer is obviously ridiculously well connected and there are shots of amazing libraries from very grand centuries old collections in castles to book crammed apartments in New York. It is reminiscent of Estelle Ellis's 'At Home with Books: How Booklovers Live with and Care for Their Libraries' which featured the libraries of Paul Getty, Keith Richard and Nicholas Barker (whose tempting library is also here.) Probably of more practical use than any previous work, it shows how books can be featured in every part of the house including bathroom, loo and kitchen. She does not recommend the larder and I would avoid the bathroom because of steam (another enemy of books.)

There is a great shot of designer 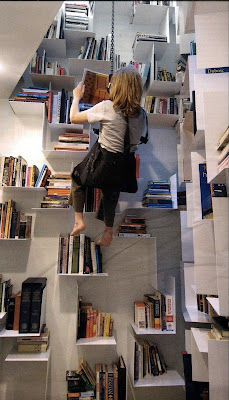 Sallie Trout who built shelves in an inaccessible stairwell which she reaches by a bosun's chair fastened to a chain hoist hanging from the ceiling above. To a bookdealer many of the styles of libraries look familiar--the indiscriminate polymath whose library takes about 4 long vans and three strong men to remove, the library full of leathery odd volumes with cracked spines and the occasional gem, rooms full of weighty coffee table books, art and design books which look valuable but are often surprisingly common. The author encourages the mixing of books with objects, especially those relevant to the collection. I am not overfond of people who put sculpture and paintings on shelves in front of books--it can have a slightly pretentious feel and is a nuisance when you want to get to a book.

The book's title, of course, comes from Anthony Powell (unacknowledged here) and one wonders where he got it from. It sounds a bit like Browning. It is the 10th novel in his roman fleuve 'A Dance to the Music of Time.' The phrase refers to a character- 'Books-do-furnish-a-room Bagshaw', who edits a magazine called 'Fission.' A great title for a trendy post war literary magazine - hard to believe it wasn't actually used somewhere. Powell gives Bagshaw's cumbersome nickname two possible origins -first, that while drunk, Bagshaw had attempted to find a volume at the top of a large, glass paned bookcase, which had subsequently fallen on top of him. Lying prone, Bagshaw muttered "books do furnish a room". The second story had himnaked in the book lined study of a drama critic, approaching the also naked wife of the absent drama critic. As they embraced Bagshaw, again inebriated, states "books do furnish a room!". The book itself is not scarce and can be had for about £60 as a decent condition first. The entire 12 volume set is rising in value and can command over $5000 and sometimes if very sharp, or with a few vols signed, over £5000.

The decoration book 'Books Do Furnish a Room' hardly mentions individual books or writers and is not aimed at book collectors. The only book mentioned by title is 'The Big Red Book of Tomatoes' by Lindsay Bareham which she values at 'more than £100' but can be got for half that and with patience £20. Leslie Geddes writes “...to me, a room without books is missing an essential feature, as important

as lights, chairs or carpets" and she adds “...take an unadorned space, cover one wall with crowded bookshelves, add a chair and a table, also crowded with books, and you have a furnished room." I second that emotion, although I no longer associate the possession of vast quantities of books with intelligence, discernment or culture--sometimes the owner is a maniac or even a book dealer. But rooms or houses without books can be disquieting, also vast wall space without pictures -often found in California. I once saw a room full of three deckers and yellow backs--fabulously impressive, as is a local collectors room full of ink blue gilt decorated Victorian bindings.Thematic collections can be fun, although one of our customer who only bought books with the name Rita in the title was probably not going to fill more than a vestibule. Rooms full of leather bindings and sets are usually impressive but not if, on closer inspection, they are all odd volumes, cracked or in Swedish. Huge collections of pulp paperbacks are also memorable as is the aroma of old, yellowing cheap paper.

Lastly on the subject of shelves -handmade, fitted shelves by a master carpenter are best but a terrible drain on finances. At the other end of the scale Ikea's Billy shelves (40 million sold) are pretty good at £30 for a six footer. Ms Geddes mentions the trend in the 'austere' Fifties for shelves of 'good looking wooden planks balanced on a series of plain bricks' still sometimes seen, also with milk bottles instead of bricks, sometimes stuffed with stones or even filled with water. As a writer of such, she has a preference for coffee table books--ideally piled on low tables for anyone to have a browse--fine, but not for the catalogue raisonné or $500 photobook featured by Parr -when it comes to collectible books condition is everything.
Posted by Bookride at 1/14/2010

The Powell cycle is reasonably easy and cheap for the later volumes, it seems to be the first three that are expensive (and how). But indeed a set seems to get a fair uplift.

re: Billys. Their virtue is the price (which enables one to spend more on books, which has to be a good thing) but their singular annoyance is they bow horribly when laden with anything more than a paperback :-( .. the best advice I'd heard from one (now sadly departed) bricks and mortar vendor in Bath was that MDF would indeed work well, but needed very short reinforced runs. They had had theirs stained up and it looked far more expensive than one would associate with MDF.

Man who collected books with Rita in the title? Rings a bell!

I find Billy bookcases fine. They are specifically meant for full loading but bigger books need to go in their narrower cases - as IKEA themselves recommend. Their only drawback is their weight - even without books. My worry is overloading the floor - especially if you live in a flat conversion. The shelves are also rather deep...
Perhaps collecting miniature books is the answer, in those circumstances!

I am currently in a room with the Ikea Billy bookcases covering two walls. We have had them for something over seven years, and they are double-stacked with a mix of hardcover and paperback books. None appear to be bowing. Obviously, your experience may vary, but I wanted to leave a positive note as we found them the best shelves for the price.

Ah a set of books with 'rita' in the title - how much are hayworth?

The reference to old Swedish books rings a bell. I remember seeing a hugely impressive-looking stack of venerable nicely bound books for sale on the web - suitable for 'executive offices' was the pitch - they were all in Danish!

"Ah a set of books with 'rita' in the title - how much are hayworth?"

Might have to refer to the Rita sales index (ouch!)