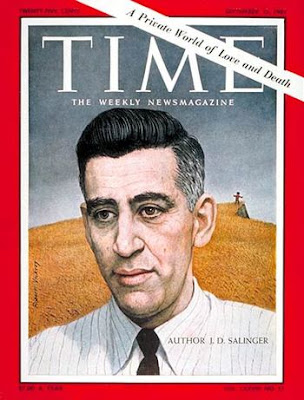 A great writer is gone. At 91 he'd had a good innings, possibly achieving longevity through a macrobiotic diet. The obituaries in the broadsheets and online dailies have made fascinating reading. Obituarists can't be seen to say the same thing as the next guy so have to dig for ever more recondite info to flesh out their subjects. Did you know that Salinger was a bit of a practical joker? He would wet his fingers with water and then pretend to sneeze behind someone while flicking the water at the back of their neck. A good wheeze, but timing is everything. On the subject of spit he used to refer to his first wife Sylvia, a German woman said to have been a Nazi, as 'Saliva.' In some versions she is French.

There is much speculation as to writings he may have left behind, some suggest a slew of stories about the Glass family or a major series to rival Balzac's 'La Comedie Humaine.' Over at The Daily Beast they have something of a scoop from their pal Jay McInerney who said he heard (from “an ex-girlfriend”) that Salinger was mostly writing about health and nutrition. The shortest obituary was seen on Twitter, probably from a Cockney tweeter -'Rye Man is Brown Bread.'

When a major writer leaves the planet there is the usual rush on Ebay to capitalise. Within hours of his death being announced a signed typed letter had gone up as a Buy it Now at $2000. It was from Salinger to one "Madeline" in New York asking her to 'please stop sending requests for an interview.' Not a bad price and it sold within minutes to the fastest finger. Meanwhile someone wants a risible $36000 for an unprovenanced and distinctly dodgy plain signature on an envelope. It does not pass the 'blink' test. Another less greedy entrepreneur wants $2500 for a USPS delivery confirmation signature from 1997. A hurried and untypical 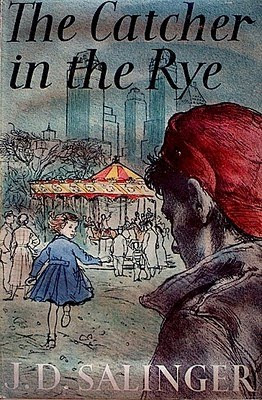 This must be a wily autograph dealer trick - you send your famous person (say Pynchon, Dylan, Marquez) a parcel containing something of obvious value and request signature confirmation and make sure you get the original returned to you. With Salinger there are about a dozen signed typed letters for sale on various online malls from $5000 to $15000 and I suspect that many more will now come out ( he appears to have been a fairly voluminous correspondent). Holders of autograph material may have been afraid to sell because of JD's litigiousness, presumably this threat is gone or has diminished.

The Onion, a sort of US 'Private Eye', had a good report on the great man's demise:

CORNISH, NH—In this big dramatic production that didn't do anyone any good (and was pretty embarrassing, really, if you think about it), thousands upon thousands of phonies across the country mourned the death of author J.D. Salinger, who was 91 years old for crying out loud. "He had a real impact on the literary world and on millions of readers," said hot-shot English professor David Clarke, who is just like the rest of them, and even works at one of those crumby schools that rich people send their kids to so they don't have to look at them for four years. "There will never be another voice like his." Which is exactly the lousy kind of goddamn thing that people say, because really it could mean lots of things, or nothing at all even, and it's just a perfect example of why you should never tell anybody anything.

[to be continued with sober pondering of values, reflections on authenticity, and the mysterious genesis of Holden Caulfield's moniker... ]
Posted by Bookride at 1/31/2010

How I hate that book! That and bloody J K

Kerouac, man. Get with the program!

Ah.
Not John Keats, J-K Huysmanns or J.K. Rowlings then

Oh, how I hope they burn any extant unpublished writings. I'd hate to see him suffer the same fate as dear old V. Nabokov.