MODERN FIRST EDITION
A re-post in hommage to and in memory of J.G. Ballard who died on 19/4/09. Will Self claimed (with a few caveats) that JGB was the most significant post war novelist. I second that emotion. Certainly in terms of knowing what was really going on (and often well before it happens) he was the supreme figure-- his novels and short stories have demonstrably foreshadowed global warming, environmental disasters, the grotesque rise of celebrity culture, science parks, 'retail therapy', even the death of Princess Diana (Crash).


I have chosen his suppressed novel The Atrocity Exhibition because it was a breakthrough book in terms of shock value and also because it is his most valuable book by a long chalk. A 'stopper' for any determined completist. You need the U.S. Doubleday 1970 first. Most of the stories that make up the book had been originally published in the late 1960s in SF magazines (which, by the way, are rarely of value) others appeared in regular journals like Encounter, Transatlantic Review, etc., - also small change to buy. The first English-language publication was in the U.K. by Cape in 1970. The publication history is best told by Mike Holliday at the definitive J. G. Ballard - A Collector's Guide site. Basically Doubleday pulped the book due to what it perceived as obscene and inflammatory content. 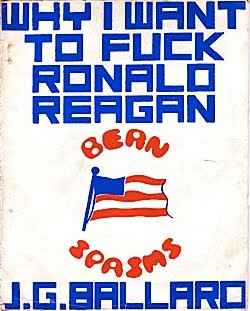 The UK first in its surreal jacket (below) can be found between £100 and £200. Note that the red lettering on the spine of the dust jacket of this edition is particularly prone to fading and unfaded copies are prized.

A serviceable copy of the US rarity in a chipped and nicked jacket is has been on sale for the carefully considered price of $10, 900 for many moons (2 years ago it was $11,900). Collectors have their limits. It is obviously howling rare but it is just possible more escaped the pulper's tank than was previously thought. Ballard mentions 'signing one or two copies that somehow escaped the Doubleday thought police.' SF overlord (pace George Locke) Lloyd Currey reckons there are ten copies around*. The rarity of pulped, seized and 'disappeared' editions can sometimes be overstated - vide the 3rd edition Ulysses where 499 of 500 were said to have been seized and destroyed by customs--there have been at least a dozen of those in commerce in living memory. We had one in the late 90s from the widow of a douanier on the Kentish coast. If copies of 'Atrocity' are going to surface New York is the place. In the late 1990s we cleared 3000+ books (mostly novels, mostly file copies) from Doubleday's London office, sadly 'Atrocity' was not among them. One thing I noticed about Doubleday in bulk is they are not sturdy books and do not generally wear well, also the jackets are thin and frail so fine/fine copies are very difficult. Interesting your comment about Doubleday. It seems that through the sixties, the seventies, and into the eighties, they were producing books, dust jackets included, that were very much cheaper in quality than other major American publishers. The jackets were indeed frail and - is it just me? - seemed more prone to fade. Then there was the paper used on the book itself, which always revealed the text on the reverse. All I've seen from those decades look like crummy book club editions.