Serious protests are expected outside Waterstone's in Piccadilly when Tony Blair signs his memoir A Journey on 8 September. A £30,000 bounty has been offered by the Stop the War Coalition to anyone who manages to arrest Blair. The Coalition's Andrew Burkin said: "We are appalled that Waterstone's are prepared to have him on their premises. It is a disgrace that he is swanning around with police protection at our expense ­ he should be in The Hague on trial for war crimes." Cost of protection is estimated at £250,000. Tony has received a £4.6 million advance. For the signing itself, the rules imposed by Blair's publishers on the Waterstone's event include no photos, no personal dedications and all bags, backpacks and briefcases must be checked in, along with cameras and mobile phones... Blair will sign a maximum of two books per customer.

No customer can actually guarantee to have their book signed. Tony probably has an urgent appointment afterwards to make one of his £2000 a minute speeches, so time is limited. It is hard for those outside Britain to understand the depth of loathing people here have for Blair. We also hate to see a guy making serious money unless he is kicking a football or in a boy band. To be fair other stars have imposed similar restrictions at signings, fans had to go through all sorts of hoops a few years ago to get their book signed by Paul McCartney. It was all worthwhile when later that week they made £300 on Ebay for a few hours of bollocks at Harrods. Dylan did a signing where one of the provisos was that none of the bookshop staff looked him in the eye, but strange behaviour is now expected from rock stars.

I had an earlier signed Blair book last year and it sold with alacrity at £200. Now there are no signed books for less than £400, with signed photos at £100. Being a very important person he has little time for signing and probably regards autograph hunters as losers. Churchill had no such problem and even Margaret Thatcher was, in her day, a willing signer. As for Ted Heath…

Salman Rushdie is an Olympic standard signer and will sign up to 8 books per person including old editions, consequently signed values are low. It will be interesting to see the fate of copies of Blair's A Journey on Ebay hours after the signing.

I went to a signing by Colin Wilson in the early 1990's and was surprised to see several Wilson clones. Young guys in black polo neck jerseys and black National Health specs with thatches of unruly hair, like the angry young man Wilson had been in 1960. The idea of a Blair clone is slightly distasteful but one wonders if people's dogs will be banned from the Waterstone's signing-- especially poodles.

[Pic below of Pamela Anderson in the famous book signing scene in Borat.] 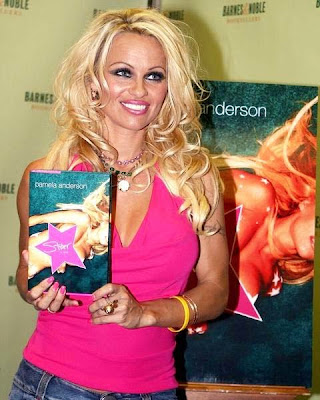 "As for Ted Heath…"
It was said that unsigned copies of his books were more valuable than signed ones. The same joke was later made about Jeffrey Archer.
The way to deal with Blair is simple: turn up with two books for him to sign, but books by someone else.

I think Heaney made the same joke about his own books. Although, unlike the other two, he may have been mistaken.

I passed on the deluxe limited edition at £200 - simply because I didn't really think it would turn a profit. Now, with all the hype and the piece in one of the Tory papers I may have made a mistake.

I love this blog and follow it regularly. But you really should try and avoid writing about politics here or, at least, please refrain airing your personal prejudices. Doing so diminishes my respect for you as an individual: about which you could probably care less but, by exposing your limitations as a commentator, you publicly diminish your professional reputation.

Bookish blogger bookride merely says a clone of Blair would be distasteful. That is the extent of his personal comment. You may thinks as a bookseller that he should be like dad and keep mum I couldn't possibly comment. I have never met anyone with a good word for Blair but here is one--- BASTARD.

AUG 18 Anon suggests you have 'limitations' as a commentator. Who hasn't? Is this person American or has using the phrase 'you could probably care less' totally incorrectly crept across the pond?

Point taken Anon...Bookride could refrain from political comment but really Tony Blair was is and always will be anathema. Think of Bush with brains. Bloggers have no editor and can generally say what the hell they like, that's the beauty of them.

I've never minded Blair. Colin Wilson is, however, totally beyond the pale.