I seem to have ended up with books from the library of the bookseller,botanist, publisher and Bloomsbury minor character Eddie Gathorne- Hardy (1901 - 1978). Not the good 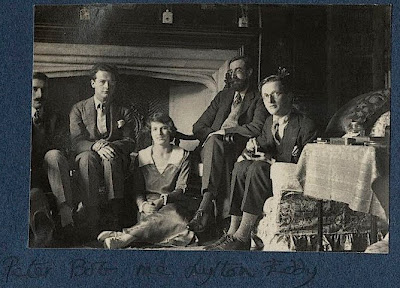 stuff but mostly detective paperbacks in regrettable condition and a few fascinating pamphlets from his (and his brother's) Mill House Press (discussed in last weeks posting.) We bought the 'last knockings' of Alan Ansen's Athens library and he obviously knew Eddie well and appears to have inherited some of his books. Ansen was an American poet and writer, compadre of William Burroughs and the dedicatee of The Naked Lunch. He and Eddie seemed to have shared a taste for 'cosies' (Golden Age British detective fiction) and indeed there is a photo (below) of Eddie from the Bloomsbury power spot Ham Spray in 1932 showing him reading 'Twenty Five Sanitary Inspectors' a now much wanted thriller by Roger East.

One of the books was by Eddie's sister Anne Hill ( of Heywood Hill and once affianced to James Lees-Milne) Trelawny's Strange Relations (Mill House Press, Stanford Dingley 1956) presented by her to Alan Ansen. Loosely inserted was a xerox of an obituary article on EGH from The Times by Patrick Leigh Fermor with inked notes by Anne Hill. It appears not to have been published (not on Google and not on The Times website which I joined for a day after giving £1 to Murdoch.) It is pretty fancy stuff, very affectionate and worth sharing with bookinistas, connoisseurs of literary eccentrics and lovers of minor, forgotten characters.

An Independent obituary on Anne Hill who died in 2006 has this background info- "…born Lady Anne Gathorne-Hardy in 1911, only daughter of the third Earl of Cranbrook. The Gathorne-Hardys - ennobled in the 1870s after Anne's great-grandfather served in Disraeli's cabinet - were a rather intellectual and distinctly unconventional family, with a characteristic rapid, affected speaking 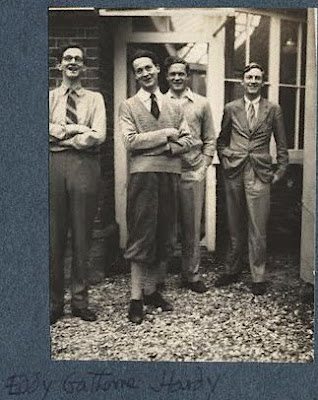 style. Anne had four older brothers, whom she adored - Jock (who succeeded in 1915 as fourth Earl), Eddie, Bob and Anthony. Eddie and Bob were experts in the rare book world, though best known to their contemporaries for their flagrant and rackety homosexuality. (The outrageous Miles Malpractice, in Evelyn Waugh's Vile Bodies, is based on Eddie.)" Miles is certainly not the only character based on Eddie and I would be grateful to hear of others. In a movie I can see him being played by the late, great Richard Wattis. Take it away Paddy (notes by Anne Hill in square brackets.) :

It would be said of no-one but Eddie Gathorne-Hardy that he belonged with equal fitness to the pages of White's Natural History of Selborne and the Satyricon of Petronius. Further analogies, with correct instinct but a few decades too early, could be sought in Valmouth and South Wind, but found to a split second in date, mood and intention in Vile Bodies, and though the brief intemperance of his Oxford days and the scrapes and festivals of the young and the bright in the 'twenties London gave him an aura which never quite faded, it was a figure of strong intellectual substance and authority that vanished from the scene on June 18th.

Originality and independence of mind stamped his background. Born in 1901, second son of the Earl of Cranbrook and Lady Dorothy Boyle, he was sent to Eton and Christchurch, but while the passion for the natural sciences which he shared with his father and brothers was turnng him into a widely travelled and accomplished botanist, his years with Elkin Matthews and a bent for scholarly research made him the best known authority  on the 18th Century among the antiquarian book dealers of his time. Less professionally, his pursuit of recondite lore found entertaining scope in Cornishiana- a collection of the eccentric dicta of Mrs, Warre Cornish - and in the slender but hair-raising confines of Inadvertencies where those passages of English literature which are open to comic or scabrous misconstruction are hilariously set forth.

Mediterranean hedonism and botanic and archaeological curiosity drew him to the Levant and war-time [services at] the Embassy in Cairo landed him, very aptly, and for most of the emergency, in a crumbling Mameluke palace under the old minaret of Ibn Tulun. He often returned to his native Suffolk, but his Athens flat, later on, with his books and specimens and his many lares was his chief base.His commanding figure was a familiar sight at tables under the island plane-trees, the formidable 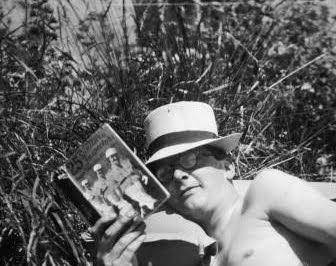 brow and [the high-bridged nose] will be sorely missed, and the [severe] horn-rims: these had long replaced the monocle which [improbably] flashed there for a year or two in the 'thirties. [He was surrounded by writers all his life.] His range of reading was wide and abstruse; deaf to music, his poetical ear was classically faultless; but it was the idiosyncrasy of his character, the mixture of formality and the reverse, the humour and the strong touch of the outrageous, which captivated all [and made it impossible for authors to keep him out of their books.]

Time gradually changed him into a Peacockian figure - [for bookish] analogies are unavoidable - a sitter for the Dilettanti portraits with a dash of the great Whiggery, a sceptic Voltairian aristocrat but not a stoic for tedium, humbug, bad scholarship, and, indeed, the recent handicaps of ill-health, could set the air crackling all around him with oaths and groans. He demanded much of his friends and got it, cutting through their quandaries by never doing anything he didn't want but repaying the trouble many times over by the charms and surprises of his company. The intonation of his voice was bandied about by all who heard it and of all his traits, it is the perhaps the extraordinary gift of witty and lapidary or cumulative phrase which his friends will remember with the most lasting amusement, affection and delight.

(Pics show EGH in specs to left with his brother Robert + Eardley Knollys and A.N. Other and then in specs to right of Lytton Strachey with brother Robert, Peter Ralli and Lady Julia Morrell--shots by Lady Ottoline Morrell. As for the Mill House Press the book you want is their 1927 production Wailing Well by M.R. James, £400 for nice copies and knocking on a £1000 for the signed one of seven.)
Posted by Bookride at 8/17/2010

I like the look of Eddie, and I especially like that book he is reading 25 Sanitary Engineers. Looks like a great jacket, can only find an Albatross paperback on the net.

Thanks for posting this. I love the way that Leigh Fermor writes. It is odd that it was not published in a newspaper.