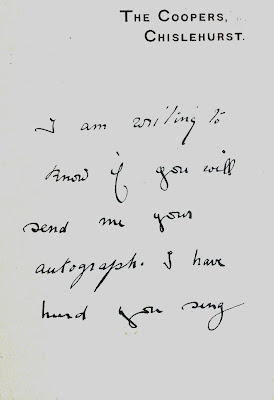 Above is a letter signed by the 8 year old Arthur Firbank, later known as the exquisite novelist Ronald Firbank. Sadly it is a facsimile, one of a small quantity produced in his lifetime. I am on the road and I dont' have the Benkovitz /Firbank bibliography so am unsure of its status. I used to have three copies and it has some value. The point is he is writing asking for an autograph- from Dame Nellie Melba (once so famous they named food after her.) Do boys still do this? Ronald Firbank's signature is probably now worth more than Dame Melba's. Such changes of fortune are common in the world of autographs - when in the 1930s William Faulkner owed money to East Motor Company Garage, he gave them a bunch of IOU's and he wrote on one of them, 'I can't pay this now but someday this signature'll be worth more than I owe you.'

The world of autograph hunting is full of sad stories of missed celebrities, refusals from self important stars and boasts about getting autographs from deeply unimpressive Z listers. Here are a few examples culled from the web:

'I met and got the autograph of André Kuipers (A Dutch astronaut), when he visited my school when I still was in 7th grade.

I was so close to getting the signatures of Fall Out Boy at one of their concerts. But they left at the last minute.

I found Eric Clapton's car outside the biggest store 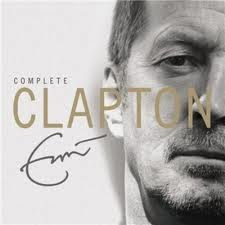 in Stockholm, Sweden. When he came out from the store, he refused to sign for me.

I went to the concerts of the Black Eyed Peas, Rihanna and Chris Brown, but I never actually met them.

I've heard woe betide anyone who asks Helen Hunt for an autograph.

Robert Heinlein would respond to autograph requests by saying, "Certainly. May I have a pint of your blood?" Had I known that and met him, I would have shown him my Red Cross blood-donor card. Do you think that would have sufficed?

Before he died, I know Marlon Brando was a real bitch about people and signatures. I think Frank Sinatra was that way too.

I was in San Francisco and saw Bob Uecker at a bar. He was a total asshole. After I took his picture with a couple of friends (in which he smiled like the Joker and waved) he told us "Now get the fuck out of here." Just the total opposite of the nice goofy guy he always portrays in TV and film.'

Bob who? However astronauts, even Dutch, are a growing area of autograph collecting as are dictators, tyrants and despots- I especially like the story (thanks Callum) of the dogged collector of tyrant's autographs posted in the last weeks comment field:

'(he) was keen to have Colonel Gaddafi's autograph and wrote, from the US, saying that he was about to name his new baby boy after the Colonel and would it be possible to have a signed photo as it would mean a lot in years to come... The Colonel sent the photo... and an engraved gold watch with a note about the photographer he was also sending who would be able to take photos of the child, parents and gifts. A child had to be found at short notice and a faux photo session was endured but, in the end the autograph was successfully added to his collection.'

There are many tales of frustrated or repelled autograph hunters. The post war London dealer Fred Bason, a sort of Driffield of his day, persuaded John Drinkwater to sign his books by saying that without his signature his books were unsaleable (this is true of many current writers.) A 1951 Time Magazine article on Fred ('Cockney Bookman') records a couple of classic rebuffs:

'...literary lions headed into the deep bush when they scented Fred on their trail. Poet John Masefield, for instance, responded to Fred's advances with a "chilly" printed card, and that "awful snob" Rudyard Kipling, trapped by Fred outside a museum, "raised his stick as I raised my hat."'

On the subject of authors (like Drinkwater) whose books are unsaleable unless signed, the question is this -which author's signature is the most common? It is hard to find an unsigned book by British Prime Minister Edward Heath, the singer Sophie Tucker seems to have signed everything that moved and for $5 you can buy fine signed firsts by writer such as Maxine Hong Kingston, Susan Kingston, Terry Brooks. If you have $10 you can buy books signed by Rushdie, Anne Rice and Margaret Atwood...for $15 you can buy a signed book by President Jimmy Carter Sources of Strength: Meditation on Scripture for a Living Faith. if on the other hand you have tens of thousands of dollars you might attempt to buy the signature of Button Gwinnett, the rarest of all signers of the Declaration of Independence. His signature looks like this:-

Wonderful! Heres an old list of nastiest and nicest signers from an autograph magazine.

About those $10 Atwoods: I imagine those signed by her god-awful LongPen™ would be worth even less... if only we could identify them.

Surely the most common signature is Charles Dickens,afterall i get offered a complete set of leather bound signed volumes,almost weekly.
Its impossible to convince people that the signature is printed on the page - so perhaps i'm wrong ?

Personally,i dislike the whole signature fashion and suspect alot of the nasty celebs are put off by people putting them on ebay,its like the paparazzi wanting a free lunch.

Bob Uecker, for what it's worth and it may be nothing, is the radio commentator for the Milwaukee Brewers--the Major League Baseball team that plays in Milwaukee and was once owned by Bud Selig, the prime a**hole who is now Commissioner of Major League Baseball. Uecker was the catcher for the Milwaukee Braves, Milwaukee's then MLB team, in the 1960s. He also appeared in Major League, in which he frequently uttered the line, "Juuust a bit outside" to refer to every wild pitch thrown by a pitcher who threw many wild pitches. He's thought, for implausible reasons, to be funny. I'm completely unsurprised to discover that he's an enormous dick. Where did I gather such useless information? Milwaukee, where I lived for 13 years.

Uecker is a schmuck, of this there is no doubt.

The words "Sophie Tucker" flew out of my mouth the moment I read "is the most common". Glad to see you've got her covered.

Fred Bason - that takes me back.As a lad I used to read his articles in The Saturday Book about autograph collecting.I imagined that I was a kindred spirit although mine were mostly footballers and cricketers,although I do have a large number of the Greek,Lebanese and Syrian Olympic squad of 1948 who were lodging in a local school.Anyway I wrote to Fred and received not only a long personal letter but a signed photograph.He'd obviously learnt a lot from his begrudging targets.

A fellow Canadian collector once joked that he had finally tracked down an UNSIGNED Atwood.