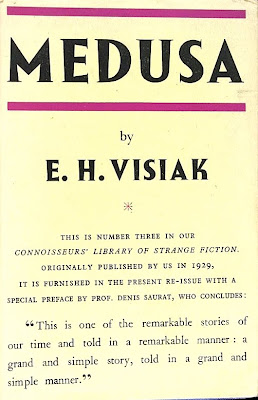 FANTASY / HORROR / WEIRD
E.H. Visiak, was the pseudonym of Edward Harold Physick. He was born in 1878 and died in 1972. I have had books signed by him in the late 1960s- usually in a very spidery hand. His poetry is relatively common and often turns up signed, as does his Milton scholarship. His first book The Haunted Island: A Pirate Romance (Elkin Mathews L 1910) is quite scarce. Bleiler defines it as 'adventure stories with fantastic elements' and it is an uncommon but not impossible book. There are 3 copies on the web, two with the same U.S based dealer and another ('...the author's excessively scarce first novel') with a South African conglomerate, the same bunch that want a wallet-punishing £8000 for the EXCESSIVELY SCARCE first issue (black cloth) of John Fowles The Collector a book that I had, until now, thought was in the descendant. A friend who was there this summer for the UEFA World Cup said there were some good books in Johannesburg but almost all severely, even excessively, overpriced. Even Dublin has more bargains. Their price on the Visiak, a less than brilliant example, is £800 where a 'monkey' (£500) might be more appropriate.

As for Visiak's Medusa, a weird story of a voyage to unknown waters, Clute and Grant in The Encyclopedia of Fantasy (1997) describe it thus:

"...as hard to categorize as Lindsay's A VOYAGE TO ARCTURUS (1920). The tale moves gradually, in a slow crescendo, from its beginnings in a normal-seeming nineteenth-century England through adventures at sea and finally into a literal pit of fantasy -- a vast circular hole occupied by the eponymous sea monster which eats sexually aware men alive. The protagonist is a young boy who remains sexually innocent, though haunted by other guilts: he survives while his companions perish." 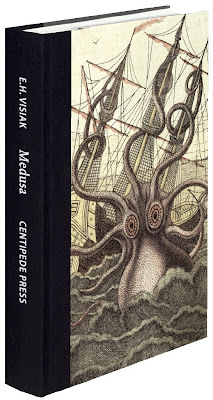 There are 13 copies of the 1929 first on ABE at between £250 and £1600, six in jackets, four with the same dealer, the Quaritch of fantasy, who describes each as 'uncommon in jacket.' Medusa seems to fall into the category of 'common, rare book' but a sharp copy at less than £500 is still a good buy. The blogster z7 noting its 'very verbose style' found it a 'chore to read' and quotes Kew in his 13 Best Supernatural Horror Novels "... if David Lindsay had written Treasure Island in the throes of a peyote-induced religious experience...Well, if Coleridge had given Melville a hand on Moby Dick after a few pipes of opium...." Given these encomiums the book's outlook has to be good - once a dozen collectors step forward and buy the overhanging online stock. Could take a while.

Normally when books gather like this the law of supply and demand takes over, this is somewhat stymied by most copies being with one seller who is holding steady; however dealers pursuing cash often break rank and price the book to actually sell (an invisible process that may well be happening...) The pic above is of the 1946 re-issue with a preface by Denis Saurat. A copy of this edition made £130 at a Sussex auction this year. The illustration below is from the Centipede Press edition which came out in June 2010 at $95. ABE has no copies. Good to see it has an intro by Colin Wilson, the sage of Zennor. 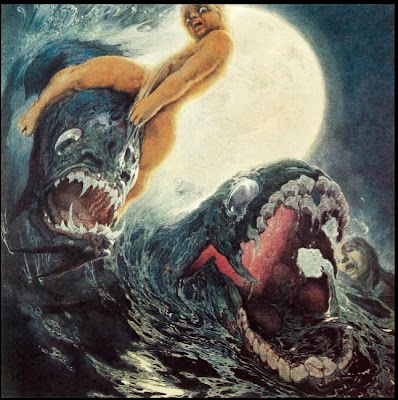 ectoplasmicpages@gmail.com said...
This comment has been removed by the author.
December 31, 2010 at 5:36 PM

The 'Kew' blogster z7, Tim Mayer, quotes in his entry on "Medusa" is none other than the late Karl Edward Wagner, who is probably the party most responsible for popularizing this book in the modern era. I suspect Wagner's boosterism is a large part of why "Medusa" has reached the inflated sums it has today.
In addition to including the novel as one of the 13 best examples of supernatural horror in literature, Wagner also chose "Medusa" as his selection in the Stephen Jones & Kim Newman edited "Horror: The 100 Best Novels" in 1988 for which he contributed a few short paragraphs on it.
My personal copy is a F/F 1960's reprint within the Gollancz "Rare Works of Imaginative Fiction" series which cost me $215. Although, I plan to obtain the Centipede press edition as it includes most, if not all, of Visiak's work in the short form in addition to the aforementioned introduction, the 1960's Gollancz is my favored edition of this book.
In addition to "The Haunted Island" and "Medusa", Visiak also wrote the book-length story "The Shadow" sometime between these two. "The Shadow" makes its only appearance in an anthology anonymously edited by John Gawsworth entitled "Crimes, Creeps and Thrills". This volume published sometime in the 1930's contains stories by the likes of Edgar Jepson, M.P. Shiel in "collaboration" with Gawsworth and his various pseudonyms, Richard Middleton, Nugent Barker, Hanns Heinz Ewers & many others and is well-worth seeking out.

Re. "Even Dublin has more bargains". Is this an example of the walk-in market overwhelming the levelling power of the internet? I went to the Dublin Book Fair and was astounded at the prices being asked for fairly easy-to-find moderns by Banville, MacGahern & posthumous O'Briens. Are tourists willing to pay for a slice of literary heritage keeping the prices artificially high? Didn't spend a cent.

Thanks for the mention of my review, it at least let's me know I"m not doing them for my own amusement.
-Tim Mayer ("Z7")