While in jail between 1961 and 1985 for two separate murders (in 1960 and 1961) Porter earned an undergraduate degree at Boston University, started a prison newspaper, published poetry and founded a prison radio station. In 1985, while being held in a pre-release centre he 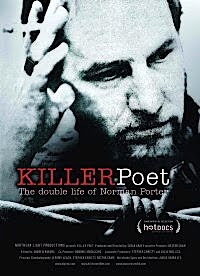 signed himself out for a walk and disappeared. While at large Porter was arrested for theft in 1993, but was not recognised as a fugitive and was set free to pursue his career as a performance poet and MC at poetry jams in the Chicago region. In September 1999 he published a poetry chapbook, Lady Rutherfurd’s Cauliflower, which was generally well received, and in March 2005 he was named Poet of the Month by the prestigious Chicago Poetry magazine.

It was seeing his picture on the Chicago Poetry website that sent a sharp-eyed police officer to compare the prints taken at Porter’s arrest for theft in 1993 with those on a police databank. The poet was arrested, duly convicted of escaping from jail and in October 2005 sentenced to three years imprisonment. However, for showing ‘limited remorse‘ he was denied parole in January 2010 and is still in jail, where presumably he still writes poetry. Porter was the subject of Susan Gray’s biopic Killer Poet (2008).

A critic reviewing Lady Rutherford’s Cauliflower after Porter’s arrest complained of the poet’s necessary evasions, sexual obsessions and the prosaic quality of his poems. It is hard to disagree, though it must be stressed that like the work of other performance poets, it probably works better read out aloud. A second edition of Cauliflower was brought out in 2005 to cash in on Porter’s notoriety. This edition can be found on Amazon for $20 but the 1999 original is hard to find and may be of value.

At the age of 24 Solis held up an armoured car and shot a security guard in the back. For this murder he spent 24 years in Folsom Prison, where he led the Writer’s Programme and published at least four volumes of poetry and some pamphlets under the pseudonym Pancho Aguila. In 1992 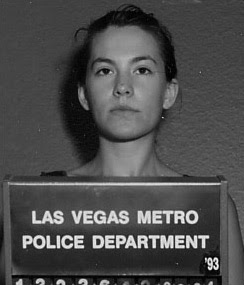 Solis was released on parole and began calling himself Julius Sauve. In 1993 he and his girlfriend, one Heather Tallchief (pic left), robbed an armoured car in Las Vegas of $3m and the couple went on to live as Bonny and Clyde style fugitives. In 2005, after 10 years on the run Tallchief surrendered and was subsequently sentenced to 5 years in jail, but Solis remains on the Most Wanted list. He has probably mellowed by now, so if you ever meet him buy him a drink and he might sign some of his books for you. Judging from the prices they fetch, it might be worth the risk !! [R.M. Healey]

Thanks Robin. The penultimate of a killer series (I'm fired). Heather Tallchief was something of a beauty (if you can look good in a mug shot surely you're a star) , -- in the Wiki entry on Solis it mentions 'Tallchief drove off with an armoured vehicle containing $2.5 million..' - there might be a movie there. Last murderers to be dealt with will be the Unabomber Theodore Kaczynski and Professor George M. Zinkhan - 'a little man who lost his marbles.'
Posted by Bookride at 1/19/2011

Verry Idham Henyansyah is an Indonesian serial killer who wrote a book (English translation of the title, "The Untold Story of Ryan") and recorded an album (both are in Indonesian) after being convicted.
http://en.wikipedia.org/wiki/Verry_Idham_Henyansyah