MODERN FIRST EDITION
Greene's most famous and most valuable book. A note of caution, the value lies almost entirely in the jacket of the British (Heinemann) edition, not wearing jacket £500 is the maximum. The US edition is worth a fraction of the UK edition but has a more striking jacket. The artwork is by the revered graphic designer George Salter who was known for his multi dimensional images. The rarissimo British d/w is pinkish - mimicking the colour of the British candy known as 'rock.' Wiki defines it as '...a tubular boiled sweet commonly sold at tourist (usually seaside) resorts in the UK...with a pattern embedded throughout the length, which is often the name of the resort where the rock is sold.' It is not unknown in Australia and even the Danish resorts of Løkken and Ebeltoft have their own rock. 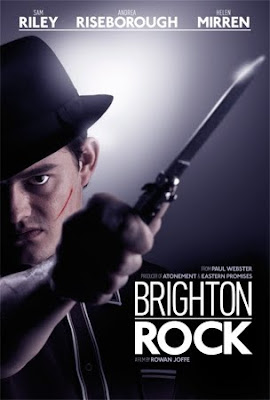 ecent theory is that Greene got the idea for the book from watching the Jean Gabin movie Pepe le Moko which he had reviewed in early 1937. Greene wrote - 'I cannot remember a picture which has succeeded so admirably in raising the thriller to a poetic level.' Similarities include smiling villains and the trivialisation of murder and betrayal. The Brighton trunk murders of 1934 and the crimes of the racecourse gangs who created havoc in Brighton during the 1930s are said to have been an input, also he had stayed in Brighton and responded to its seedy and violent undercurrents; in the novel he was exposing what he called 'the shabby secret behind the bright corsage.' Brighton ('London by the Sea') still has a louche and sordid side to it, although possibly less palpable than in GG's day. Keith Waterhouse, a former resident, said that ‘Brighton has the air of a town that is perpetually helping the police with their enquiries.’ A re-make of the film has just appeared starring Sam Riley, Andrea Riseborough & Helen Mirren. It is set in the moddish 1960s, plays up the religious elements and is said to be pretty good.


The first of Greene's overtly Catholic novels. Orwell said that they put forward 'the idea…floating around since Baudelaire, that there is something rather distingué in being damned; Hell is a sort of high-class night club, entry to which is reserved for Catholics only, since the others, the non-Catholics, are too ignorant to be held guilty.…'

The 1948 movie has cult status. Richard Attenborough, the original lovey, is unforgettable as the baby faced psychopath.

VALUE? About 4 years back there was a pretty nice jacketed copy of the 1938 UK first that went from book fair to book fair at £50K. It seems to have eventually sold. An unpleasant ex library copy in jacket sold on October 2009 at £11,000 (Dominic Winter.) The US first in a great jacket with wraparound band has made $3000 but decent examples can be had for less. At the Sotheby's sale of the library of an anonymous but obviously well heeled 'bibliophile' in October 2010 a copy made a staggering £70,850 ($110,000). It was described thus: '... original red cloth stamped in gilt, original pink dust-jacket, cloth folding box, some slight spotting along edges, short tears to edges of jacket (one at head of lower cover with some slight loss), neat repairs to lower hinge of jacket...very good condition.' A fine copy is unlikely to show but on this form could make £100K. It represents the greatest disparity in a modern first edition of value with and without jacket. In the recent Sotheby's case it works out the book is worth 140 times more with jacket. The only other 20th century book I can think of that is close to this sort of disparity is The Hound of the Baskervilles, possibly The Maltese Falcon.

PROOFS? Someone emailed about proof values. They can vary alot. In the late 1980s there was a vogue for them and prices surged but the market quickly ran out of steam. Proofs were then looked upon by dealers with mild disdain except in the case of major works or controversial books and banned items. Typically they are plain and uninteresting in appearance. Ebay has slighly revived their fortunes but they are tricky and don't tend to hold to consistent patterns of value. 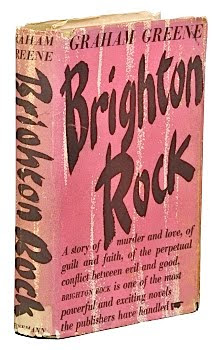 I sold a proof of Brighton Rock about 10 years ago for circa $4000, not in wonderful condition. They are not impossibly scarce. At first I was excited by it, but found there are almost no changes with the proof and the hardback first- Greene's period anti-semitic tone is retained (passages like '...he had been a Jew once, but a hairdresser and a surgeon had altered that...' and references to Jewish women as 'little bitches') although it was later expunged. The only difference is that Brighton is spelled Brihton on page 77 and one letter of damaged type has been repaired on page 13. Substantial differences would have made a substantial difference to the price- a good rule with proofs. Rock on.
Posted by Bookride at 2/04/2011

The new film of "Brighton Rock" somewhat waters down the "noir" feel of the novel and the 1947 film by updating it to 1964 and unnecessarily wheeling in the mods and rockers beach fights. For we Brightonians the fact that 90% of the filming was done in the Brighton's maiden aunt neighbour, Eastbourne, is close to unforgiveable.