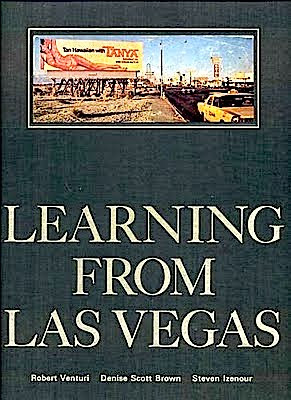 ARCHITECTURE
Cult classic -architecture / urbanism...a revolutionary case study that opened the world's eyes to vernacular architecture and iconography-the "ugly and ordinary" structures and signage born to satisfy the needs of regular people, not architects. It shows the considerable influence of pop art which some art critics say has, in its turn, influenced contemporary art. Venturi Scott Brown are now an important architectural firm with buildings at Harvard, Michigan, Yale and Tsinghua University Beijing. Robert Venturi is often referred to as the "father of Post Modernism."

The book is a large quarto of 188 pages and can turn up in a translucent glassene printed jacket that adds considerably to its value. In a 2007 interview by Melissa Urcan with the two surviving authors we get a look at the work 35 years on: then we have written an essay called "Las Vegas After Its Classic Age," which emphasizes that Learning from Las Vegas in the context of now is completely historical. If you had written a book on the Renaissance in Florence, it would have taken maybe 100 years to say, "Oh that's historical." Now you can say 35 years have gone by very fast. But Learning from Las Vegas is still relevant in many ways, such as in its recognition of the relevance and significance of iconography and signage more than of space. Las Vegas got us in a lot of trouble, but we learned a lot from it.

Denise Scott Brown: We did concentrate on the Strip, but not only on the Strip. We studied patterns of land use throughout Las Vegas. And we mapped all the strips of Las Vegas, not just the famous Strip... VALUE? The book has been reprinted and can be picked up for $30 but the 1972 first is now of some value. When I featured this book 3 years ago there were 4 copies on ABE at between $1800 and $4500, there are now 14 with a decent enough copy sans jacket for $600 and a few in jacket from $1400 to $3500 and a one signed by Venturi with a drawing at $5000 in chipped jacket. Some copies listed may have jackets, the ever helpful Powells of Oregon merely describe their $1950 copy as 'standard' - a brutal price without jacket, but fairly decent with. The odds are it has no jacket and is a sad and tired example. If a copy is nice, dealers tend to say so. The jacket being printed acetate/ glassene is almost always less than fine and a perfect jacket could see a fast sale at $3000 otherwise it has become a slightly slow book to sell, although architecture is still a good subject and more reliable, say, than photobooks...For the person 'holding folding' there is also 'An Archive of Manuscript Materials Relating to the Publication of Learning from Las Vegas' at $35000 - considerably less than you could lose in 10 minutes play at the Bellagio. 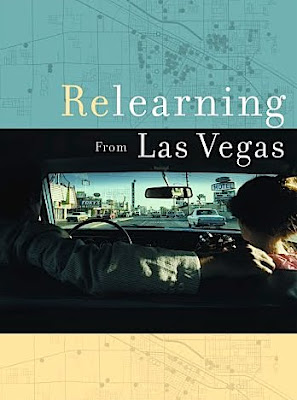 OUTLOOK? Something of a sleeper, it can be picked up occasionally at library sales, boot sales and flea markets or even from web-savvy dealers who see online prices and assume the sellers are 'having a laugh.' Possibly a good hold over a decade or two, there seems to be considerable interest in the book and a plethora of critical works about it. I suspect in years to come Las Vegas will be seen as a suburb of hell and will be regarded in the way that we now think of Atlantic City or Blackpool. Only the Gods really know-- it mayl be better to sell now before more copies come to roost. My last copy took about a year to sell in 2008 at $1400 ('All lettering on front and back of jacket intact, loss of LE of 'Learning' at head of spine- an impressive example...')


For $50 or less you can buy I Am a Monument: On Learning from Las Vegas on Learning from Las Vegas by one Aron 'Balsamic' Vinegar. This 'provocative rereading of an iconic text' compares the text of the 1972 version and the 1977 'stripped down' edition. Vinegar is concerned lest we '... miss the underlying dialectic between skepticism and the ordinary, expression and the deadpan, that runs through the text.' Post post-modernism and beyond.
Posted by Bookride at 2/15/2011

Powell's actually has a nice image of their copy, as well as the following description:

Good to see someone dissing Powells-- they have the most unpleasant staff in the world and dont' know how to pack a book. They are also kind of expensive and pay a pittance. Apart from that a damn fine shop.

I have a copy with both the glassine cover in quite good shape (a few pieces missing and tears, but 95% there) and with dedication (to me, I worked there in the 80's) and signed by all 3 authors. While it would be hard to part with, I have some motivation to do so and am curious what the possibilities would be.

I'd appreciate any info on what independent sources (ie, you) think i could get for it, and what the best method would be if I wanted to go this route - consign through dealer? sell to dealer? Sell on Ebay???

Nice item. Ebay is probably the place. A dealer would need to double up and your expectation may be too high for them in a time of general brokeness. Caveat vendor however--the place is full of bottom feeders, cheapskates and dullards/ dimwits, with the occasional shining star with a fat wallet. Good luck.

Thanks for the comment. I'm nervous about Ebay with such a high value item - how do you protect yourself? Any advice?

ERic--protect yourself on Ebay either with a high statrting price (the minimimum you will accept) or start low but have a reserve below which it cannot sell, the former is much cheaper but often ends up with no bids at all. In the end you usually have to let someone make a bit of money...

Thanks for the comments, but I really meant how do you protect yourself against fraud? Ie, someone claiming they didn't receive it, or say they want to return it and it never comes back - that kind of thing?

Also, how would one pack an item like this, particularly with the very delicate glassine cove?

Any advice would be much appreciated.

It's still hard to consider parting with it - such sentimental value. Any guesses what it would be worth?

I dont thaink I have had any of these problems in a hundreds of sales, the UPS truck could crash down a ravine however! Try sending signed for that way they cant say it did not arrive. Expect about $1400 and hope for twice that. Pack with great care in a firm box with plenty of padding. Good luck.

Thanks, maybe I worry too much since I'm inexperienced at this.

Remember my copy is signed by all three authors! If it would only get that much then I'd probably just hold onto it. Thanks for all the advice.