The notorious Reverend John Selby Watson, who killed his wife, may well have been the inspiration for Dr Thorneycroft Huxtable, the pompous headmaster in the Sherlock Holmes story The Priory School, who insisted on reminding his hosts that he was the author of Huxtables Sidelights on Horace. The Watson case was a cause celebre at the time and Conan Doyle, as a medical man with an interest in forensic science, would have known about the trial. Also, is it incidental that Holmes’ companion shared a surname with the criminal? There are also two obvious similarities. John Selby Watson too was a headmaster ----of Stockwell Grammar School in south London—and he also edited classical texts to supplement his meagre living.

these. Having been dismissed in 1870 from his poorly paid Headship on the grounds of age and falling numbers, Watson was left in poverty--with no pension and with only the dribble of royalties from his many schoolbooks to sustain himself and his wife, who would frequent taunt him on his failure to provide, and for his sexual impotence. On October 8, 1871, just a few weeks after he had finished writing his History of the Papacy to the Reformation, a servant found Watson unconscious . He had taken prussic acid. In a note dated two days earlier he explained that he had killed his wife due to provocation. Her body was found in a bedroom with its head smashed in by the butt of his pistol. An ex-pupil at Stockwell, the writer F. Vincent Brookes later testified in his autobiography that Watson ‘ was a man of absolutely uncontrollable temper and quite unsuited for a headmaster ‘.

At his trial Watson pleaded insanity. The judge rejected this excuse and the jury found him guilty, but recommended mercy. The judge chose to ignore this plea and sentenced him to death. However, following reports and recommendations by leading medical men, the judge admitted that the clergyman in a temporary fit of insanity had killed his wife. Watson’s death sentence was commuted to life and he was sent first to Woking jail hospital, and then on to Parkhurst, where he died thirteen years later, aged 80, following a fall from his hammock.

The novelist Beryl Bainbridge based her speculative work, Watson’s Apology (1984), on the crime. Bainbridge’s novel renewed interest in Watson’s writings for a while, but although one chancer in the USA wants $495 for a bog standard copy of Justin, Cornelius Nepos and Eutropius, few could argue that with prices for most of his books hovering around $20, he has become a collected writer. Having said that, it would be nice to find the unpublished manuscript of Watson’s History of the Papacy to the Reformation. Was it sent to the publisher---or did it end up among the murderer’s papers?

A perfect example of art imitating life. Famous travel writer and intellectual Krystian Bala boasted anonymously in an e mail to the Polish ‘ Crimewatch ‘ that he had committed ‘ the perfect crime ‘ when he had brutally murdered Dariusz Janiszewski in 2000. The police, however, could do nothing until a detective received an anonymous call five years later urging him to read the crime novel Amok, which 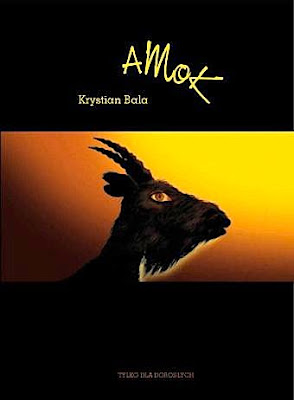 had appeared three years after the murder. The detective found a copy and discovered that the details of the murder exactly matched those in the novel.

Bala was hauled in for questioning but denied any part in the murder, explaining that he had relied mainly on press reports for his material. With no real evidence to convict him he was released without charge. Before long, however, the police had the evidence they needed. It was discovered that four days after his disappearance, the victim’s mobile phone had been sold on the Internet using an account belonging to Bala. However, without sufficient evidence of his direct involvement in the killing Bala could only be convicted of ‘leading the murder ‘, although he was duly sentenced to 25 years. It would seem that Bala had reason to suspect that Janiszewski had had an affair with his estranged wife.
When the story broke there was a clamour for Amok in Poland as readers tried to find clues in the book that matched the facts of the murder. As far as I know, the novel hasn’t been translated, but it ought to be, as it has been optioned for a film. [R.M.Healey]

Many thanks Robin. You might say that when the Bala story broke the customers ran amok...A signed copy would be good for the ghoulish collector, I guess. Selby Watson sounds like a Casaubonical figure -- but Casaubon on a very short fuse.
Posted by Bookride at 3/31/2011

There's something about headmasters... The Watson case has some curious parallels with that of George Stephen Penny. He was a schoolmaster burdened with debts, and in 1923, in a fit of angst, he threw his daughter to her death off the balcony of his Elgin Avenue apartment. He also threw himself off, and his wife. George Penny survived and later pleaded insanity. The judge accepted the account of his lapse of conduct. He was sent to Brixton, and then Broodmoor, where he wrote the book 'Guilty but Insane' under the pseudonym 'Warmark'.

Krystian Bala was certainly not a famous travel writer. Intellectual seems to be pushing it a little as well. He was a talented student who became an unsuccessful businessman, murdered a man who slept with his ex-wife, and wrote a not-very-good book about the experience.

David Grann wrote a good essay about the case in his collection 'The Devil & Sherlock Holmes'.