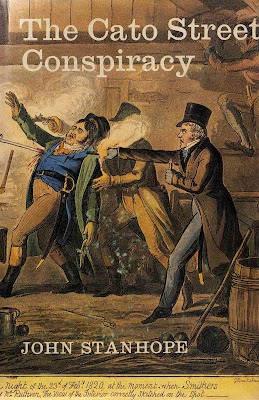 The poor relation of crime fiction ? I don’t see why it should be. Real people, real murder, real scams, real places. What could be more intriguing? God knows, there’s enough of it in the papers, the TV channels, the radio, the Net; so why shouldn’t books on true crime be up there with Rankin and Dexter ?

One top collector I met devoted most of his bungalow in Ruislip to his collection. He said he preferred facts to fiction. Nothing wrong with that. And although some true crime faddists are a little weird and obsessive, how much darker are the souls of those harmless-looking little old ladies who sup their Horlicks while reading about a man getting shot in the head.

The penny dreadfuls and broadsheets by Catnach et al from the eighteenth and early nineteenth centuries are interesting from a printing history and sociological point of view and are, like Victorian bus tickets, thin on the ground and therefore expensive. The Newgate Calendar( aka Rogues Calendar), a digest of notable crime from 1700 to 1764, the year of its first printing, is unashamedly sensationalist. It went through several re-printings right up to the 1960s, when Pan published a paperback edition in several volumes. On ABE all five volumes of an 1810 edition can be had for a felonious $1,200, but the hardback ‘ scholarly ‘ reprint of 1999 is pure daylight robbery at $2,930.

The Terrific Register at one penny, and including a woodcut, was the favourite reading of the teenage Charles Dickens, who thrilled to its sixteen pages of blood and guts each week from 1825. A certain bookseller near the BM wants a reasonable enough $1,638 for all 104 parts bound in two volumes. Accounts of trials and executions are in demand, especially if the offender has fallen from grace. Accounts of the trials of those two Georgian notables --the Reverend Dr William Dodd and Admiral John Byng—command big prices. If those on trial were popular scourges of the political establishment, like Hone, Cobbett and their radical associates, published accounts of their trials are also sought after. The Three Trials of William Hone, however, was so frequently reprinted from 1818 that you shouldn’t really cough up more than £30 for a copy, but you may have to now that the history of political radicalism is fashionable again. 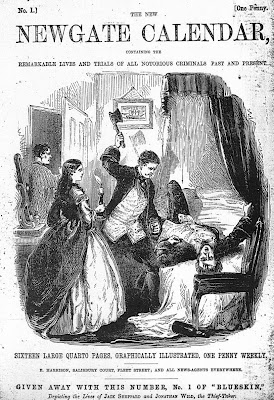 Occasionally, if you are lucky, you will find collections of crime ephemera. Two months ago scrapbooks bulging with cuttings and photos relating to the famous Charles Bravo case of 1876 sold for four figures at auction in Cambridge, which came as no surprise. Diaries, letters and ephemera are big at the moment, possibly because of the current academic fad for ‘life writing ‘. Fifty odd years ago such stuff was a lot cheaper, and a collector like John Stanhope, author of the excellent Cato Street Conspiracy (1962), could secure an envelope containing engravings of the conspirators and samples of their speeches from the scaffold in their own handwriting, for a measly 7s 6d. That couldn’t happen now that the famous hayloft in Marylebone has its blue plaque and the wine bar next door is (or was ) called ‘ Thistlewood’s ’.

Of more modern publications, the best is the famous ‘ Notable British Trial ‘ series that ran from the thirties to the fifties. Each volume was a hefty piece of reportage in red boards, on thick paper and with minimalist jackets. Each title focussed on one particular trial from the seventeenth to the early twentieth century. Some books are more collected than others—those that have passed into legend, such as the trial of Crippen and the Thompson-Bywater scandal —being especially sought after. Expect to pay at least £8 a volume without a jacket; twice that price with one. Most true crime connoisseurs will have a whole set of these, which could set you back nearly a grand. Surprisingly, the late Sir John Mortimer, didn’t have a set, though I did spy a few volumes, including the Trial of Oscar Wilde, on his shelves when I interviewed him in his Chiltern bolt-hole.

Many thanks Robin. What I couldn't do with a set of 'Notable British Trials.' Must check out ABE to see what people are attempting to get for them these days. As I recall financial crimes were good, also war crimes- and limited editions like the 250 copies of the trial of the 'Resurrection Men' Burke and Hare' (£100+). They used to be referred to by raffish runners as 'Notably Brutish Trials.' The great crime dealer Camille Wolff once told me that her best customers were criminals and policemen and sometimes they were there at the same time and she had to make them feel comfortable with one another. Book collecting is a great equaliser but I wonder who were the bigger spenders...
Posted by Bookride at 3/18/2011

Some NBT titles are "notably"(!) more common than others - the Oscar Wilde being a prime exampple. I have a short shelf of them here with the Tennyson Jesse edited Trials of Evans and Christie as the highlight (jacketed not in the usual bland style but with a stone wall and bars illustration).
I once found a NTB of the Nazi War Criminals at a book fair and hesitated about its purchase for half an hour. When I went back, it had been sold. Not seen one since (at the cheap price it was being offered at!).