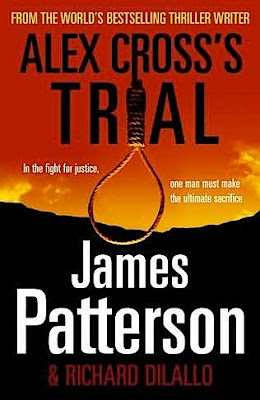 An American book dealer friend (he calls himself a dealer but he simply uploads tons of book to Amazon) was rather dismissive about the typical readers of James Patterson's violent novels, describing them as 'mullets in muscle cars.' We got on to Patterson because he had had a book request from his son who is doing a spell in jail for drug offences. The lad needed as many Patterson paperbacks as his dad could muster. Apparently in prison they are a sort of currency. With a Fang or Angel or Virgin or anything featuring Patterson's hero Alex Cross you can buy favours, goods and services in jail. Call me an elitist bastard, but I feel this does not bode well for the quality of the writing...


Patterson appears to be by far the best selling author in America and he and a small team of writers under the Patterson franchise put out nearly a book a month. One in every 17 books bought in America is by the great man. He is also the most downloaded of all writers. He outsells Stephen King in the way that the Beatles used to outsell the Moody Blues. King, by the way, called him a "terrible writer" of "dopey thrillers." Patterson is laughing all the way to the proverbial bank and is said by some to tell a better yarn.

Certainly when it comes to collectability KIng is way ahead of him. A complete collection of King in first and limited edition could cost you more than a couple of new Cadillacs but you can buy a fine first edition of Patterson's rarest book (his first book The Thomas Berryman Number) for under $500, although the usual crowd of overchargers want $1000 or so for it. Most of his other work is readily accessible for paltry sums, although you will see fine first editions of his Jericho Commandment at over $100. Also signed copies are good-- when a writer makes a ton of money he tends to be less accessible.

In Britain Martina Cole seems to be the favourite reading of the imprisoned. In an article in the Times on new book theft (Feb 2009) Murah Ahmed notes:

'... According to PLR records, James Patterson...is the most borrowed author from libraries. And books about crime are also frequently stolen - hence the works of Martina Cole, a prolific crime writer, appear high on the list. Her books are also among those most read in prisons, and she claims to be perfectly happy to be a target for thieves: “I think it's great, personally. If people want my books badly enough to go and steal them it's a compliment, really.” '

A word to the wise--if visiting a friend or relation who has fallen foul of the law do not take them some sort of improving literature-- try a tote bag full of Patterson (or Martina Cole) - behind bars they are better than money.
Posted by Bookride at 3/11/2011

Thanks Jimmy. Oscar also requested Meredith and Hardy. He read Dante everyday which he said 'saved his reason...' THis might still work. I read of a man in jail who kept sane reading 'War and Peace'. The trick was to try to visualise the words, to live another life. Patterson surely cannot do this for you...