'Bruges was desperately depressing at this time...that was the reason Hugh liked it so much...a mysterious equation established itself between his own spirit and that of the place. In the eternal fitness of things a dead town furnished the corresponding analogy to that of a dead wife. The bitterness of his desolation demanded an environment that harmonised with its poignancy. ..his longing was for an infinite silence...' DECADENT LITERATURE
Having caught up with the excellent comedy thriller 'In Bruges' starring Colin Farrell, Ralph Fiennes etc., I thought I would revisit Rodenbach's classic of decadent literature. It seems likely that the writer and director Martin McDonagh or at least the fine cinematographer knew of the work, as some shots echo the images from the 1930 edition with colour plates by Levy Dhurmer. Rodenbach created an image of the Flemish city - haunted, melancholy, adrift in time - that endures today. When it appeared first in 1892, the novel was quickly recognised as one of the greatest achievements of the decadent movement -Huysmans and Mallarme, among others, championed it. It became a best seller that has been reprinted many times. It even became fashionable to visit Bruges and feel its melancholy vibes.

As Terry Hale says in his intro to the 1993 Atlas Press re-issue of the 1903 edition, Rodenbach - as a consciously Symbolist writer conveys 'a mystical sense of a deeper reality:- ' ...that sense of the secret meaning of things is portrayed as invading every corner of the brooding city with its belfries and its beguinages, its sombre canals and its old, silent dwellings...'

When I started this book list I vowed not to give away too much hard won knowledge about 'sleepers' but this book is so interesting and so resolutely unfindable that -- what the hell. It's the UK ed that can't be found, the French is not impossible in fact I have just bought one. I have heard of 2 copies of the Swan Sonnenschein edition in the last decade. I think Hale has one that was used as the text for the 1993 re-issue and another decadent collector lucked out and found one at an internet book site for a pittance. An attractive illustrated edition appeared in 1930 with 18 colour plates by Levy Dhurmer. Levy Dhurmer is responsible for the 1890s portrait of GR (above.) There is a good article about the book called 'Bruges of Sighs' by Alan Hollinghurst at The Guardian site occasioned by the new English translation that appeared in 2005. Hollinghurst, also a highly rated novelist, who introduces the new Dedalus translation notes that '...the opera Die tote Stadt (premiered in 1920) is based indirectly on Bruges-la-Morte...and is now the form in which the novel is most widely known. Its immediate source was Le Mirage, the four-act theatrical version of Bruges-la-Morte which Rodenbach prepared at the end of his life, but never saw staged.' The opera was written by the 23 year old Erich Wolfgang Korngold.

VALUE? Although rare there must be a ceiling on the value of the 1903 British first. Punters are not plentiful and possibly not holding a lot of folding money. The top price for a limpid example might be £600 with the French going for about the same in Euros for a copy in original wraps with no foxing or obvious signs of wear. Right now in December 2009 a Signed presentation from the author to Jean Lorrain sits on the web at £900 (howver it lacks the frontispiece which is almost fatal.) The 1930 illustrated edition has an auction record of $100 from the late 1980s, so say $600. The illustration of the bridge above is from that edition, the original is illustrated with moody photos. The serious money with Rodenbach is to be had for Les Vierges - Les Tombeaux (Samuel Bing, Paris,1895) a 2 vol livre d'artiste with with 4 original lithographs by Hungarian painter Joseph Rippl-Ronai ('the Lost Nabi') in the first volume, and 3 woodcuts by his friend the Scottish painter James Pitcairn-Knowles in the second volume. Hard to find for less than €4500. STOP PRESS. In 2009 I sold reasonable but not fine copies of the Swan Sonnenschein edition and the first French at £325 each. Need replacements.

Below is the remarkable grave of Rodenbach. Along with Edith Piaf, Proust, Oscar Wilde, Jim Morrison and the Black Prince he is buried at Pere Lachaise in Paris. His grave is much admired and visited, especially by Goths and latter day decadents. As can be seen he seems to be pushing open the lid of his sepulchre ... TRIVIA The movie seems to break a record for the amount of swearing. The DVD has an amusing one minute collage of every damned expletive. It's somewhat politically incorrect and certainly Belgist with lines like "There's two things Belgium is famous for; chocolate and child abuse, and we all know that they invented chocolate to get at the kids." Farrell at one point attacks and downs an obnoxious American diner who complains about his smoking in a restaurant "That's for John Lennon you fucking yankee..." It's a long way from Rodenbach's doomed romance but the same feeling of melancholy comes through, especially in a scene with the Dubliners singing "On Raglan Road" over scenes of brutal mayhem. One wonders if the movie has encouraged tourism to the 'dead' city, just as the novel did. 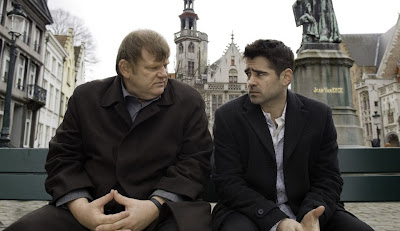 "As can be seen he seems to be pushing open the lid of his sepulchre ... "
...or pulling it down, perhaps

"In Bruges" is a very funny film and I like the extra short film taking one on a meander on the canals but don't forget the film of the actual book -"Brugge,die stille"- directed by Roland Verhavert with English subtitles. Gloomy, oppressive but nicely shot in Bruges as it should be.