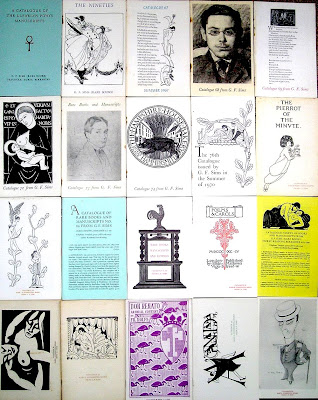 I have a catalogue of the great bookseller G. F. Sims with me on the road. It is from 1971 and could give an insight on books as an investment. If you imagined that you had bought a dozen or so books from this catalogue and were now selling them nearly 40 years later, what kind of return would you be getting on your initial outlay? Bear in mind that we have the benefit of hindsight and also that even if one had got on the phone at 8.00 on the morning of the catalogue's first day the books may not have been available.

A word about George Sims. He was probably one of the greatest booksellers the world has ever known. This isn't like being one of the greatest architects or racing drivers, it's a fairly small and mostly undistinguished field. He certainly wrote great bibliomysteries (green Penguins--easily obtained.) Even Evelyn Waugh thought they were good. In my opinion he is up there with Dunning. As a bookseller he realised that, in his field (mainly modern firsts) most of the really good books were actually in the libraries or estates of writers and he went after them.  As a writer himself and using charm and dexterity he got into the collections of the Powys family, Eric Gill, Richard Aldington, A.C. Benson, Julian Symons and thus his brother A.J.A. Symons's collection and thus Baron Corvo. He is probably responsible for triggering rampant Corvomania in the early 1960s - not quite Beatlemania but a force to reckon with...

His catalogues are well written, amusing and incisive with mindblowing material and fantastic rarities. I am not sure if his prices were reasonable or expensive. Most look cheap now - wbich might not be said of some other catalogues of  that time--e.g. Dr Notmann's Covent Garden Bookshop where prices of  recent material still seem toppish.  Economics sites on the web seem to indicate that, across the board, prices have gone up by roughly 12  times since 1971 (according to Resale Price Index,but it's more if you relate it to wages)-- so I shall put three prices: The Sims price, what it represented in purchasing power then (ie 12 X) and the putative, conservative value now.  I have put in a few books that have not gone up -
out of interest and to make the picture more realistic.

Aleister Crowley. ACELDAMA (By a Gentleman of the University of Cambridge) 1898. One of 88 copies. Japanese vellum slightly marked but nice £40 / £480 / £1600
Sims was an early proponent of the Beast as a collectible proposition…

De La Mare. THE LISTENERS. 1912. £15 / £180 / £60. An ordinary copy with the Senhouse bookplate and our first bad investment. Sims gives it his best shot however , he writes : 'Thomas Hardy is said to have read this delightful book on his death-bed.' This may be from his own reading or, more likely, old sales patter handed down by forgotten booksellers.

To be continued with a few more winners (inc an Orwell hand corrected proof for £85, scarce Plath, a very nasty 'Bosie' letter to Millard and an astronomically priced Belloc rarity + some George Moore's and Charles Morgan's that have fared very badly…

Many thanks to bookseller and publisher Callum James for the above Sims catalogue collage...over at his site Front Free Endpaper he keeps the Corvo flame burning bright.
Posted by Bookride at 12/02/2009

Another way to compare is to look at what would've happened if you'd put the same money into the stock market. For instance, the NASDAQ started in 1971 at a base of 100, and is now at 2185 (or so)
It looks as if most of those books would have beat that factor of 20.

Thanks for the article on Sims. It obviously jogged one punter into life as I have just had an order for a Sims title that has been on my shelf for 20 year!

And also it is necessary to consider the high fee commissions to sale the books (30-40 % aprox.) opposite, i.e., to the small fees in the stock market.

The market of the ancient book is a narrow market.

If the book gives wisdom and pleasure it is not necessary to demand him any more.

I wonder if your Sims catalogue says anything about selling copies of Xavier Mayne's Intersexes?

I am trying to track down extant copies of this rare book for a census/article and I suspect he may have sold copies!