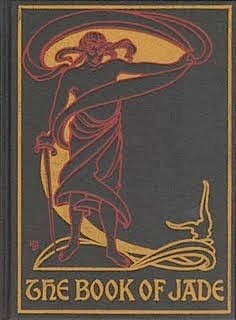 Anonymous (David Park Barnitz.) THE BOOK OF JADE. Doxey's, At the Sign of the Lark (William Doxey), New York (1901)

DECADENT LITERATURE / POETRY
I was first alerted to this book by a young solicitor (Karl Potts)-- a collector of the exotic, the erotic, the decadent, the distasteful and the kitsch. He was especially keen on 90s American 'purple poetry' Francis Saltus, George Sterling ('Wine of Wizardry') and Park Barnitz. David Park Barnitz (1878 – 1901) was an American poet, known solely for his 1901 volume 'The Book of Jade', a classic of decadent poetry. It was published by San Francisco bookseller William Doxey, publisher of the humourist Gelett Burgess, as well as many obscure, macabre and forgotten writers. Book of Jade was actually published in New York after his California publishing enterprise, called “At the Sign of the Lark”, had gone bankrupt. By February 1901, Doxey’s new venture was bankrupt again, but not before he had published the Barnitz, probably his finest achievement. The young Barnitz insisted on anonymity, possibly because his father was a clergyman and certainly due to its druggy, death obsessed, oblivionist and decadent content.

He is America's own Rimbaud and in the line of Dowson (not quite in the same league as either) a sort of Marc Almond to Dowson's Bowie. He died at the age of 23 having graduated from Harvard and returned to Des Moines where he haunted the public library. At Harvard his class mates included Wallace Stevens who went on to great poetic (and financial) glory. One of his teachers was Henry James's brother William James, author of the classic 'The Varieties of Religious Experience' (1902.) James pronounced him brilliant and Park became the youngest person ever admitted to the American Oriental Society. The East was an important influence. He has been compared to Count Stenbock and Beddoes. James Thomson's (B.V.) The City of Dreadful Night was a palpable influence. Barnitz was to some extent resurrected by the attention of H.P. Lovecraft ("…and who could have written that nasty, cynical Book of Jade?" he asked in a letter to Maurice Moe), Clark Aston Smith and Donald Wandrei and later by David Tibet and the scholar Mark Valentine who published a splendid new edition under the Durtro imprint in 1998.

The poems are shot through with opium and decadence, almost certainly theoretic:

“O poppy-buds, that in the golden air
Wave heavy hanging censers of delight,
Give me an anodyne for my despair; … ”


- in late 19th century Des Moines it was probably hard to score opium, it's hard enough to get a beer there even now. Difficult to think of a less decadent place on the planet, even Tunbridge Wells holds more promise of dissipation and excess. I doubt whether absinthe was procurable there but it occurs, as a token, in these wonderful lines:

'Kalliste your Persian ghazal cease to sing: the sun is low
And the sacred hour of absinthe is now very very nigh.'

That beats 'the sun has gone down over the yardarm.' Occasionally the poet displays a great lyric gift but there is much in the book that was written pour epater les bourgeoisie or at least to spite his religious father. His lines on the Madonna are worth quoting:

“Anguish and Mourning are as gold to her;
She weareth Pain upon her as a gem,
And on her head Grief like a diadem; … ”

The problem with full on decadence is you are working from a smallish palette and it is hard not to repeat lines, themes and phrases- the above lines, for example, are reworked again in another context. A slightly edited 'tag cloud' extracted from GoogleBooks for 'Book of Jade- goes like this:

VALUE? Several Doxey books are highly collectable. ...to be continued with some harsh words for the Print on Demand version of the book and a picture of the young decadent...
Posted by Bookride at 12/14/2009

Actually, you could probably get laudanum in your local drugstore with no difficulty. It wasn't until after World War I, about the same time that marijuana and alcohol were banned, that the sale of opiates became illegal in the U.S.A.

Goodness: from his verse he sounds like an over-the-pond Enoch Soames!

Am a big fan of David Tibet's songs - Daedalus Rising is an old favourite - and of his art, but his taste in literature has me beaten.

Re opiates i think cigs were the big difficulty in some midwest states at the turn of the century. I recall a (presumably authentic) description of a Pullman conductor going down the train to tell smokers to stop as they were about to cross a state line.

Merry Christmas to you Nigel and to all your guests for making this such an interesting site to visit (and learn from).

Thanks Edwin and a Merry one to you North of the Border. Good to hear the sacred name of Enoch Soames invoked--one of the most elusive of 90s figures...Nigel

I have a copy of the Doxey's edition. Really quite a stunningly good example of the brief and exclusive school of 'Oblivionist' poetry which would certainly include Thomas Lovell Beddoes and a couple of others. Like Isidore Lucien Ducasse: he departed this sphere very early indeed !