Booksellers Come to the Crunch 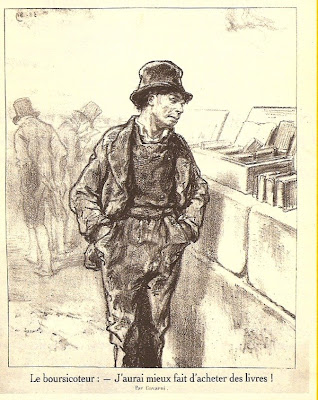 This is the recent cover of a catalogue from the waggish Parisian dealer Bruno Sepulchre. He has cleverly dug up a mid 19th century cartoon from Gavarni (Paul Gavarni -the nom de plume of Sulpice Guillaume Chevalier born 1801 or 1804 in Paris – November 23, 1866). It shows a mournful looking speculator in stocks ('boursicoteur') obviously reduced in circumstances, looking at rare books he can (presumably) no longer afford to buy. Gavarni has him say (my translation) 'I would have done better buying books!'

Booksellers have been grumbling since Gutenberg and they don't appear to have upped their grumbling much since the great Crunch began in September 2008. Internet sales, especially of high ticket items, are slightly slow but this is offset (if you are a Brit) by the fall in the pound-- effectively books bought from the UK are over 20% cheaper than a few months ago. Ebay seems to have slowed down, it has always been full of cheapskates, hagglers and bottom feeders but even some of these guys have zipped their wallets tight for the duration. A genuine signed 'Audacity of Hope' would perk them up but not much else.

There is a theory (hinted at by Gavarni above) that books are a good place to put your money in a recession. This may have some validity if you are buying the right stuff at favourable, not to say cheap, prices and there are a few cool customers doing just that. The trouble is that no one really knows what will sell years down the line. Some concentrate on classics (Hound of the Baskervilles, Wind in the Willows etc.,) some on landmark books in great condition, some on quirky stuff--erotica, books written by madmen, quack medicine, transport, education, conspiracy theory, illustrated rarities unknown to World Cat etc., Good luck to all of them. Ordinary books have become slower to sell, a pity because they are mostly what you find. It takes a very deep recession to stop beautiful and rare books from selling.

Auctions have held their own but there are occasional reports here of good books going for low prices or not selling at all. A sale bombed at the Drouot in early October and it is known that French dealers are complaining more volubly than ever. At the Howard Colvin sale of architectual books (Bloomsbury 27/9/08) some healthy prices were achieved with very little unsold. This is a collection that had been formed over 30 years ago with impressive books bought in 'book sweeps' at what his friend John Harris says now seem 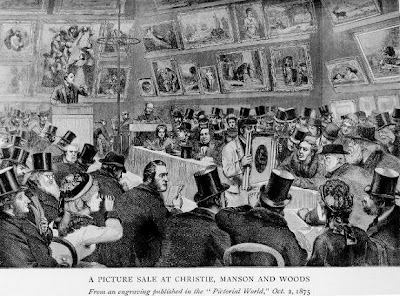 At another recent Bloomsbury Sale (30/10/08) there were slightly more buy-ins than usual (3 collections in a row at one point --Whitbread, Orange and Booker Prize books, possibly with immodest reserves.) Many books, especially literature, sold near their low estimates. However many books did well, including a world record price for Fleming's 'Octopussy' -- some unfortunate end user paid £360. The copy was mint with the 10/6 price but equally mint copies could be had at the same time on Ebay at circa £100. There are however copies on ABE (Books Tell You Why again!) at over £400, a certifiable price. This is a book still in good supply in first edition and excellent condition. It was sold by the cartload at 20p when Margaret Thatcher was on the throne. I still have a few somewhere.

Who knows? I'm slightly foxed. My suspicion is that it will get a little worse. One guy I know selling art books talks of the recession becoming a slump, meanwhile on Bloomberg earnest pundits say that we have hit bottom and further lows are unlikely. Second hand paperback sales are entirely unaffected, Folio Society books still sell well at a tenner each, Bond still has plenty of punters with platinum cards...a quantum of solace there.
Posted by Bookride at 11/08/2008

In case you didn't see it I have left you a comment in your January 2008 section re Peter Joliffe whose death I have only just discovered sadly. Thank you for such kind comments.

I suppose this isn't a good time to unload my leather bound copy of DUNE.

Now I know what a quantum of solace means!

Such a wonderful drawing. When you click on it to see it large, you can see what a wonderful job Gavarni has done in capturing the look of this poor, forlorn broker.

I wonder if public libraries will finally see an increase in business now that people are spending less?

Amen for your analysis of the rare book world. It is time to vent.

The view from across the pond is also spotty.

My basic strategy is this: buy only Fine in jacket; buy only highspots or exceptionally rare "niche" books; buy solid literature with low initial print-runs; cruise like a shark for bargains; and leave the ultra-modern firsts for those with suicide wishes. (Remember when a signed 'Da Vinci Code' went for $1000?) Sold one myself for that. I still feel guilty.

On the other hand,this may be the best time to buy quality books in ten years.

But discrimination is key. As a friend of mine says, "There is no such thing as a $100 copy of 'The Shining' by Stephen King."

Last thoughts: buy books that started or influenced genres. I.e., "The Sheltering Sky" by Bowles; anything by Fitzgerald; or look for "sleeper" titles that are ultra-scarce, like "The Hustler" by Tevis.

Good luck to all. Books will be back and we'll be happy we have them.

not an intelligent comment, but just a note that i love this blog. the idea of it. thanks.

I'd like to hear what you or your readers have to say about this. A certain Chicago area dealer on Abebooks has led me to come here to vent. I didn't know where else to go when i was overwhelmed again by insane over-descriptions matched only by unthinkable over-pricings. Inspired by a Don Delillo posting here from a while ago, I was aimlessly searching his name on Abe, minding my own business when i came across this description of "Falling Man" longer than the book itself!
If he's not a shyster he's trying very hard to look like one. I am not a dealer just a novice collector but for those of you dealers...us customers ain't total dopes you know! Sheesh!

The guy you refer to Modern (not) Rare only has the book priced at 3 times what it's worth for a signed first. Needs some money back for his epic catalogue description I guess--also his copy is not just fine or mint --it is 'flawless.' Only immaculate beats that. PMB

Maybe these guys in Chicago don't need the money though. They refused to sell me something once on the grounds that my UK credit card did not work in the US though I have used it there many times. Then again, I had found something shockingly - and unbelievably -underpriced on their site so maybe that was it.

I can beat them all though: right now ANY AMOUNT OF BOOKS has a 1st "The Teachers of Gurdjieff" by Rafael Lefort on ABE at £40. Fair enough, not particularly rare or collectable, seems about right.

I can't do the maths (who could?) but that's got to take some beating.