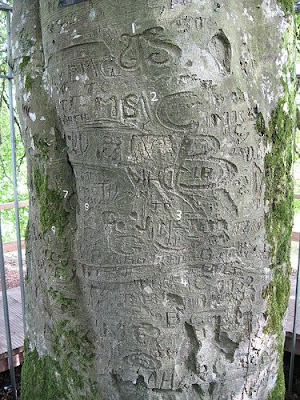 That's Shaw's signature (well his initials) on the 'autograph tree' in Coole Park, Ireland. Something the autograph and art collector can never own - like a Banksy on a motorway bridge. More taunting were the drawings in the sand that Picasso was wont to do near his villa in South of France as the sea came in. Shaw was fairly generous with his signature and it is often worth looking in his books to see if they are signed. His handwriting is, I imagine, hard to forge --very clear and looped and deliberate. One of his japes was to reply to a request for an autograph with an handwritten card reading something like 'I'm sorry I never give autographs. G. Bernard Shaw.'

Here are 3 anecdotes about Shaw letters and signatures. The first is rather odd, if not foolhardy:-


A country clergyman, hearing that Shaw was an expert in the brewing of coffee, wrote to ask him for the recipe. Shaw obliged, adding as an afterthought that he hoped the request was not an underhanded way of obtaining his autograph. The clergyman cut Shaw's signature from the letter, returned it with a note thanking him for the coffee recipe, and concluded: "I wrote in good faith, so allow me to return what it is obvious you infinitely prize, but which is of no value to me, your autograph."


A lady notorious for courting celebrities sent Shaw an invitation reading: "Lady--
will be at home on Tuesday between four and six o' clock." Shaw returned the card annotated, "Mr. Bernard Shaw likewise."

to be continued with a short rant about upsetting prices for Shaw's most common book 'The Apple Cart' worth £5 as a first ed but sometimes seen at 50 times this price...why oh why oh why etc.,?
Posted by Bookride at 11/18/2008

Is The Apple Cart Shaw's most common book? I'd have thought the Collected plays and Collected prefaces given away free as newspaper circulation boosts in the 1920s and 1930s were more common.

I just received a mint condition Candida by Shaw (1929) that is signed by him to what seems like one of his actors, judging from the inscription. I have no idea how to value it. Thanks for your help!