ILLUSTRATED BOOKS / CHILDREN'S LITERATURE
Handsome russet quarto lettered gilt and with 50 colour plates - illustrations that made Arthur Rackham famous and turned his Illustrated books into a publishing phenomenon. Tens of thousands of his books were sold over the next 30 years from Poe to Swinburne, Hans Andersen to Shakespeare. It used to be said that a dealer with a big enough check book could fill a pantechnicon full of Rackham just going round the shops of Southern England. The essential thing about Rackham is that you can sell him for big bucks to people who, up to that moment, had never heard of him --often the most they had ever spent on a book. Several venerable businesses are based on sales of Rackham (+ Dulac, Nielsen, Heath Robinson and Jessie M King). Country houses used to have shelves of Rackhams (often in the billiard room) piled up with the Punches and Badminton Library for guests to browse on rainy afternoons.

There are even experts on Rackham, although now the whole thing can be learnt in about an hour. The biggest collector in the UK is Michael Winner- the man they love to hate, and a man not possessed of the taste of, say, Bernard Berenson. Rackham is 'eye candy' - it is hard to deny his charm and skill but the whole thing has been done to death. Ebay is full of the stuff making good prices but often less than he was making 3 years ago. He is hard to buy from the public--with deceased estates the family often keep the Rackhams and nothing else and even to a person who hardly knows a book from a chicken brick they look valuable. The vellum limited editions are much prized--the one of 500 signed from 1906 in unsoiled vellum can command £4000 and more. 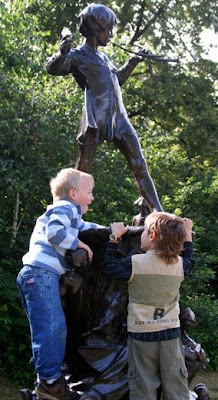 The Peter Pan chapters of Barrie's The Little White Bird (1902) were re-issued in 1906 as Peter Pan in Kensington Gardens. The story has resonated so much that there is a beautiful and much visited bronze statue of Peter Pan in Kensington Gardens. For some London visitors it is their first port of call and it is close by where the four foot deep fields of tribute flowers to Diana were laid in the sad September of 97. A contemporary review of this book published in "The World" reads "Mr Barrie has done what no one else has done since the inventor of "Alice", he has invented a new legend, a modern folk story which comprehends all the innermost secrets of the modern child, be he four or forty. Mr Rackham, for his part, has been bewitched in his cradle: he does not dream of fairies or hobgoblins, he knows them." VALUE? If you are lucky you can find an unproblematic copy of the work for about £500, if you are Rackham crazy you can fork out £10,000 + for the unwieldy Peter Pan Portfolio, where in the edition of 20 copies every plate is signed and sometimes for a few dollars more you get a drawing. I am told that Rackham prices have peaked and certainly they are not the assured fast seller they used to be unless you underprice them. This is either due to a shift in taste or the plethora of his books going through Ebay.

TRIVIA. The lovely Rackham plate below is entitled 'There is almost nothing that has such a keen sense of fun as a fallen leaf' --he was especially good with trees and fairies- also gnarled roots, goblins and witches. The English have a special love of leaves--I'm thinking of Hopkins poem 'Margaret are you grieving/ Over Goldengrove unleaving' and Vita Sackville West who identified those minor pleasures in life that everyone experiences from time to time as 'through leaves', after the small but intense pleasure of walking through dry leaves and kicking them up as you go. A little Bloomsbury Press, not at all precious, calls itself 'The Through Leaves Press.' OUTLOOK? First posted this 9 months back--all the high end copies are still for sale, including our own nicer and cheaper than all the others and fine, signed limited in spotless original vellum. I blame the collapse of Lehman Bros. Ours has a rather good association (OK it's based on a bookplate but it's been there for a century.) It was the crowns that alerted me. It has entwined ornate 'L's' bound by a marquess's coronet, Royal coronet above - this is the bookplate of Her Royal Highness Princess Louise Caroline Alberta, Marchioness of Lorne who lived at Kensington Palace - the 4th daughter of Queen Victoria (1848 - 1939.) Said to have been 'beautiful and intelligent' and also artistically gifted. A fine sculptress--her best known work is the statue of Queen Victoria in Kensington Gardens (below). She is also known to have entertained many artists at her home at Kensington Palace when she was the Duchess of Argyll. It doesn't get any better. 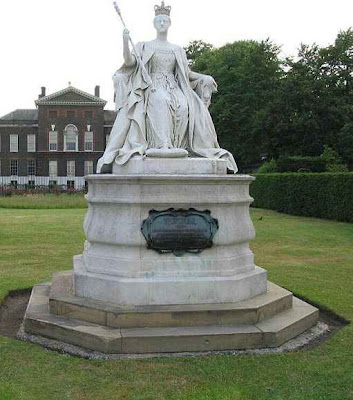 please tell me there is such thing as a chicken brick

thanks Maggie--as I recall chicken bricks were sold to cook chickens in (Habitat/ Conran) and were briefly trendy in early 1970s...they have a place in this world. N

i have a red vellum covered hodder and stoughton edition of peter pan in kensington gardens. there are just sixteen colour plates and on the front cover is the peter pan is the fairies orchestra picture in gold. my copy is decidedly brittle but the colour plates are in perfect condition. can anyone tell me in what year this edition was published, and how many colour plates there were in it originally? do the colour plates have any market value on their own?

I also have a copy that sounds like yours. there is foxing and some pages are loose, the illustrations seem ok. I once took it too a road show where I was told it was worth about £30 and that I might do better to frame and sell the illustrations, I never did. The condition is deteriorating so maybe i should have done it!

I also have a copy of Peter Pan in Kensington Gardens, the book itself is in deteriated shape but the plates are in wonderfull condition, should i be trying to frame and sell them separately ?