The Real Cost of a Library... 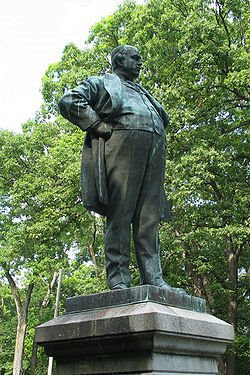 While another great orator* from Illinois heads for the White House and the retiring president (not known to be bookish) gets his Presidential Library it is worth recalling this anecdote about the great 19th century agnostic and freethinking politician Robert Green Ingersoll (1833-1899). At one point he was offered the governorship of Illinois by the Republicans if he would keep quiet about his religious views --he refused saying - "I would not smother one sentiment of my heart to be the Emperor of the round world." Echoes of William Blake.

He possessed an extensive library reflecting his views and interests. A reporter once asked him how much his library had cost him. Ingersoll looked over the shelves filled with fine books and said - "These books cost me the governorship of Illinois and the presidency of the United States as well."

*Robert Ingersoll, like Barack Obama, was a great speaker. Such was the power of his oratory that at the height of his fame, audiences would pay $1 or more to hear him speak, a giant sum for his day. Tony Blair gets the equivalent of about 5 cents. That's Ingersolls statue above in Peoria.
Posted by Bookride at 11/15/2008

If I might add my 10 cents--I think Blair gets more than 5 cents, he cleared a tidy £240K after a lackluster speech in Dongguan, the Chinese are still pissed...btw Ingersolls speeches are available as podcasts somewhere but someone else is reading them. Neat blog cobber.

Regarding the literal and metaphoric cost of libraries, I wrote about a New York Times article concerning how, allegedly, C.E.O. Libraries Reveal Keys to Success. The money quote (so to speak...) turns out to be incorrect, but the article is still worth reading.

I grew up in Peoria and played often in the park where this statue is situated. I remember being very impressed by his girth. Not once in grade school or in four years of high school was Robert Ingersoll mentioned. Thanks a lot school system.