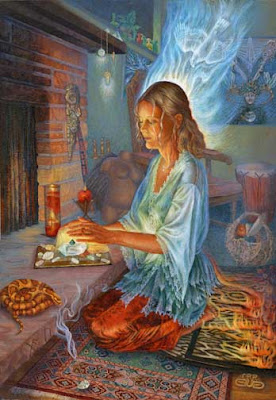 Found in A.E. Waite's 'Occult Sciences' (1891) between Belomancy and Capnomancy (divination by smoke) this method of detecting witches and sorcerers and also using a Bible for prediction etc., Belomancy, by the way, is divination by arrows...

"Occasionally the forms of divination exceeded the bounds of superstition, and passed into the region of frantic madness. There was a short way the sorcerers which was probably the most potent discoverer of witchcraft which any ingenuity could devise. A large Bible was deposited on one side of a pair of weighing scales. The person suspected of magical practices was set on the opposite side. If he outweighed the Bible he was innocent; in the other case, he was held guilty. In the days of this mystical weighing and measuring, the scales may be truly said to have fallen from the eyes of a bewizarded generation, and to have revealed " sorcery and enchantment everywhere."

Bibliomancy, however, included a more harmless practice, and one of an exceedingly simple character. This was the opening of the Bible with a golden pin, and drawing an omen from the first passage which presented itself. Books like the Scriptures, the "Following of Christ," and similar works, abound in suggestive and pertinent passages which all men may apply to temporal affairs, but declares that he had recourse to it in all cases of spiritual difficulty. The appeal to chance is, however, essentially superstitious.

By the way A. E. Waite is a useful writer to find books by but not in the same league at all as the Great Beast. His most expensive work is likely to be his first 'An Ode to Astronomy and Other Poems (100 copies, thought to be 1877) or his second 'A Lyric to the Fairyland.' R B Russell values these at £3000 and £2000 respectively, possibly taking the price from the air. His rarest is undoubtedly 'The House of Hidden Light' written with Arthur Machen and published in 1904 in 3 copies. Russell has this at £1500. The 2 authors are pictured below, Machen on the left (uncharacteristically.) 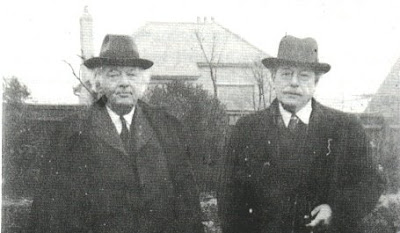 Waite's work was mainly on the occult and mystical (he was Grand Master of the Golden Dawn in 1903) and, although one sees some of these books at giddy prices (£1000+) they are seldom worth it and he is hard to sell at ambitious prices. Signed copies are often seen marked up as if he was Yeats or the Beast but are not especially uncommon and do not double the price. One of his works on the web 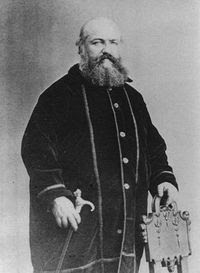 'The History of Magic (1913, translated from Eliphas Levi) turns out be Aleister Crowley's copy, signed by him and with his extensive (and scornful) annotations throughout. Crowley and Waite had an acrimonious falling out, a bit in the Naipaul /Theroux or Beaton / Waugh mode + he claimed to be the reincarnation of Eliphas Levi, and many of his own writings were inspired by the French occult author and Mage (pic left). Priced at the palindromic and "beasty" price of $11666.11. Toppish in price but not completely unthinkable, although a bit worn and shaken with the odour of cigarette smoke (possibly the strong shag that Crowley liked) it had also belonged to Peter Warlock the composer with his ownership signature dated 1916. Crowley punters are unlikely to be put off by the odour of baccy but it could be a good bargaining point. A distinguished and important association deftly catalogued by the mighty Powell's of Portland.

Never been to Powells --I imagine it is like the Strand Bookshop in New York but on a gargantuan scale. I would like to go there. Martin Stone, uberscout and lover of fine books, was unimpressed by the condition of the good stuff there when he passed through with the good Baxter on their legendary road trip. He also did not dig their slightly anti dealer vibe. You sometimes get this in bookshops- they cannot appreciate that dealers are often among their best customers. All I know is when I have ordered from them they pack the books lightly-- belonging to the majority school who believe you merely have to put a book in a bag to send it; bubble, packaging and protection not needed (allright, some dealers go too far the other way with 7 layers of hurricane proof wrapping.) Apart from all that they are one of the world's top shops, with more books than the Bodleian, the tower of Babel and the library of Babylon.
Posted by Bookride at 3/09/2009

You're RIGHT about Machen's politics. In Author's Take Sides on Spain he is one of the few pro Franco writers. Have been to Powells and it's OK but I prefer a smaller shop like Sandoes in Chelsea.

Powell's was once a family-run business and was far better in those days. Today, they devote nearly as much space to tote bags, coffee, and blank journals as they do to books (a slight exaggeration, but only slight). A disappointment of a shop, where good books turn up mostly through statistical inevitability.

Not sure why this stuff is all so expensive (are people who look for books by Waite called Waite Watchers?) - maybe it's heavy metal guys who push the prices up.

The only black magic stuff I've read that I find I really want to read again has been by Geoffrey Household and Blish. Blish's Black Easter is, like Hilary Mantel's novel about the spiritualist badlands, Beyond Black, horribly convincing.

Thanks Edwin-- I had considered a few light hearted puns on AEW's name but thought they might be a bit heavy handed, however your 'Waite Watcher's hits the spot!

I like Household esp 'Rogue Male' (must do something on it-quite valuable in jkt) but didn't know he dabbled in the black arts... N

Curiously, Crowley's copy of THE HISTORY OF MAGIC, now offered by Powell's, was in a Weiser catalogue about a year or so back for about $6,000. And I didn't buy it then.

I think Household- like Blish- used magic for literary purposes, rather than believing in it- in any sense.
The other book used for bibliomancy besides the bible was Virgil- open and select at random- it inspired a story by Richard Garnett, Duke Virgil.

The occult features in only a couple of GH's novels, perhaps best of all The Sentinel, which has also one of the loveliest mustelids in fiction.

The Dance of the Dwarfs is not occult at all but is one of the spookiest books I've ever read.

Apart (of course) from Rogue Male, his books seem awful cheap even in nice inscribed firsts. I have one inscribed to Desmond McCarthy (but not that DM, alas).

Doesn't he also hold the record for the longest gap for a follow up with Rogue Justice? There's a topic!

I think The Europe That Was is perhaps the book I have most often re-read. Full of great stories, including Abner of the Porch, which I think is the best cat story ever written.

It occurs to me that GH is like Machen (to drift back in topic) in this, that his stories often engage with boundaries- a liminal writer. But while I admire Machen, I love Household!

Have to agree about the crappy way Powells packages books. A few years ago I paid over $300 for a rare book -- a fair price for this hard to find tome -- and was appalled when I received it in the mail. They had shipped it in one of those skimpy cardboard mailers without the slightest bit of protective wrapping. It didn't seem to hurt the book but I complained about it anyway. Of course, complaining about it did me absolutely no good, but it would give me second thoughts about ordering from them again.

Powells cannot pack a book properly because they have contempt for the buyer--that's my crackpot theory.

1913 History of Magic UK 1st Edition. I'm wanting to know the value? Can anyone advise me who I could get in contact with?
Sandy