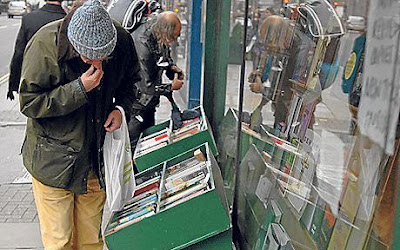 This is an article by the excellent Peter Robins who interviewed me by phone -it came out in early March in The Telegraph (British broadsheet daily newspaper sometimes called 'The Torygraph' by Lord Snooty and his chums at Private Eye.) Frankly this thing of bookshops booming is erroneous, they are doing well compared to sellers of carpets or Jaguars, but some shops are hurting pretty bad and turnover very much depends on what books you have bought.

Through a combination of sheer luck, dedicated and unctuous networking and using various cunning stratagems learned from old and vanished booksellers, we have this year bought some exciting libraries, mostly devoid of dogs. Such is this 'bookshops are booming' thing in the news that an optimist phoned me up wanting to sell some books and said something along the lines of 'I imagine you can pay a bit more than usual because books are much needed in these difficult times.' The odd thing is he was being deadly serious.

Above is the photo they used with the byline 'Keen: a browser at Any Amount of Books in Charing Cross Photo: Paul Grover.' Here is part of the article...

This has not been a good decade in which to own a second-hand bookshop, with discounted new books at supermarkets, growing competition online and from charity shops, and the rising rents of a long property boom. Now, however, there is something that, squinting hard, you might just describe as a ray of sunshine. It’s what the rest of us call a recession.
At Scarthin Books, a rambling independent shop with new and second-hand books in Cromford, Derbyshire, Dave Mitchell has grown used to things running against him. He says business was expanding nicely until about 1999. After that, with great effort, it has been steady. But this year his January sale brought its best results since 2003; “not back to the glory days before Amazon and Tesco started eating into sales, but certainly no 'downturn’ on the last few years”.

Mitchell does not separate his second-hand and new sales, but he sees two divergent trends in the second-hand trade as a whole. “For the traditional antiquarian shops, business is appalling,” he says. “But the big browsing shops are booming.” Other reports seem to bear him out. Barter Books in Alnwick, Northumberland, and Richard Booth’s Books in Hay-on-Wye – heavyweight “big browsing” bookshops – each reported a strong 2008.
Some gains at the cost-conscious end of the market are also visible at Any Amount of Books in Charing Cross Road, London, where Nigel Burwood offers a bargain basement, discounted review copies and an eye for rarities that he also shows off at his blog, Bookride.com. “There are more people looking for savings, bargain-hunters and bottom-feeders,” he says. “And they are all very welcome.” He hopes that the weak property market might reduce rent pressures.
At the same time, he is coping with the other side of the equation: buyers for books with three or four-figure price tags have grown “very cautious”. “In my experience,” he says, “the rich shut their wallets just the same as the poor, if not more quickly.” And dealers seem to be buying much less from one another.
But there is one potential gain from the recession even for sellers of more expensive books. A weak pound brings eager internet custom from abroad.....For many people, charity shops have become an important source of second-hand books. Oxfam considers itself to be “the largest high-street retailer of second-hand books in Europe”; it has more than 100 shops dedicated to books or to books and music, and its online bookstore has about 50,000 listings. Barney Tallack, its deputy trading director, does not detect a recession-related sales surge “yet”. “But we are seeing sales levels ahead of last year,” he says, “which in the current context could be considered good news.” The recession is also a chance for Oxfam to find new shops.
Traditional booksellers are often sceptical about Oxfam, and will tell you that its prices can be higher than theirs. But Tallack does not see his bookshops taking trade away from traditional dealers – they bring more buyers into a given area, he argues – and says its prices are set by volunteers with local knowledge and specialist expertise.
But the character of a traditional second-hand shop is impossible to replace. It’s a question of serendipity. There is no online equivalent of picking up a battered-looking tome about “The Men of the Sixties” and discovering, on turning to the title page, that these aremen of the 1860s. Then there’s community. “The second-hand bookshop is the last oasis for eccentrics and outsiders and general antinomians,” says Burwood.
At the bargain end of the market, traditional shops can still compete on price. Although AbeBooks is starting to experiment with free-postage offers, a 50p or £1 book online is still frequently more expensive than a £2 or £2.50 book in a shop once delivery is included.
“We do think that we undercut the net by the time you’ve taken that kind of thing into account,” says Mitchell. In a recession, that could be a 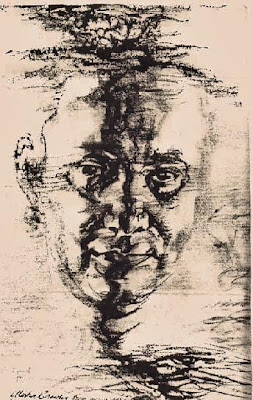 
Funny to see the word 'antinomian' in the Telegraph. We use it as workplace slang for unorthodox religious books and their collectors- occult, new age, Zen, spiritualists, Sufi, millenniarists, diabolists, Wiccan, pagan etc., Some hardbitten dealers refer to their New Age books as the 'touchy feely' section. In fact New Age is not the great seller that it was--in the field of religious books it is the scholalrly and academic tomes that sells and, of course, the occult (the blacker the better.)

In the Age of Dawkins and Hichens it is good to see these sections thriving. An Antinomian, as every schoolboy knows, is one who denies the obligatoriness of moral law, one who believes that Christians are emancipated by the gospel from the obligation to keep the moral law, faith alone being necessary.' (Chambers.) Ed Sanders at one point calls Charles Manson an antinomian--in the sense of one who invents his own religion. (Pic left- a late work by Austin Osman Spare- a drawing from memory of Crowley done in 1955.)
Posted by Bookride at 3/25/2009

Wigtown was certainly busy during the book fair, am not sure how it's done rest of 2009. Certainly the book town status has done the town a lot of good. I managed to buy quite a few books that were real bargains, as well as a few old SF anthologies that have proved enthralling.

Am a fan of the big Oxfam shop in Byres Rd, Glasgow (think we nattered about this before), they have some quite collectable books - which they often ebay, and often at too high reserves - but I've also picked up some nice things in their high turnover £1.49 section.

That pic of Crowley is expensive am sure - he looks like an Ayrshire butcher off to a Rotary meeting. Scary!

In my bookshop days, traditional religion was known as the godsquad, New Age the oddgodsquad.

In the days when I worked for Gollancz as a rep there was, for an all too brief time, a bookshop on Regent Street, close to Piccadilly Circus, that seemed to specialise in new age religious stuff. Anyone remember it? We sold armfuls of Khrishnamurti and Sufi material as well as John Michell's "Voyage to Atlantis" and Watkins "The Old Straight Track". Mid-70's probably. Not surprisingly the dear floaty things that bought this kind of material failed to spend enough to keep it afloat and it went bust. The rates must have been horrendous.