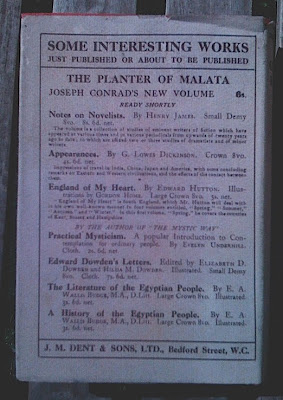 We did a post a while back on books that are known as ghosts - a ghost is usually a work announced as a forthcoming book which never actually gets published. Sometimes this is because the book was never written, either because the author lost interest, got sidetracked or blocked, died or because the book appeared under another title or in a different form.

This morning I found a very decent condition World War 1 book 'The German Enigma' (Dent, London 1914) not especially scarce but distinctly uncommon in a jacket. On the back of the jacket some forthcoming publications are announced, including a new Henry James and a Goldsworthy Lowes Dickinson. However at the top the list is the new Conrad 'The Planter of Malata' stated as being 'ready shortly.' In fact it never appeared as such, the story 'The Planter of Malata' was one of the stories in his 1915 collection 'Within the Tides.' Conrad apparently made a lot of money from this story and was peeved that 'Chance' and 'Heart of Darkness' which he considered greatly superior were comparatively poorly rewarded.

That's it. A ghost is announced. Rejoice with me. Will take the book to the June Fairs in West London for a bit of minor boasting.
Posted by Bookride at 3/30/2009