Manet and the Post-Impressionists (1) 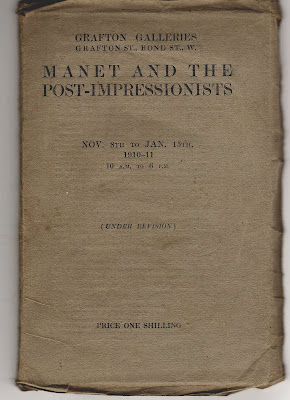 MODERN ART / EXHIBITION CATALOGUE
If there is a Holy Grail among exhibition catalogues this is it. ‘Manet and the Post Impressionists’ is arguably the most significant and the most controversial exhibition of paintings ever to be held in the UK. It was an exhibition which put modern art on the map. Indeed, it actually defined what modern art was, and those who saw it went away either enraged or inspired.

When the 46 year old artist, curator, writer on art, but not yet Bloomsburyite, Roger Fry began to assemble paintings by the greatest 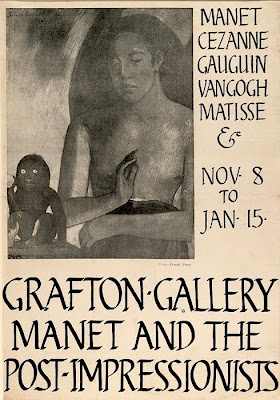 names in the modern French school, the work of Cezanne, Seurat, Van Gogh, Matisse, Picasso and the rest had never been exhibited in the UK. Some of their names were known to art lovers, but a trip to the continent was necessary to view paintings by them. Fry meant to change all that with a show that would rock the staid world of salon art and Royal Academy annual exhibitions. With his many contacts in the art world he asked leading collectors in Europe and beyond to lend him their paintings. Many works were for sale. Dealers in modern art were more than eager to break into the British market.

For want of a name to describe such a disparate group Fry coined the term Post-Impressionism, and so as not to scare away potential visitors he attached to this new word the name of the respected Manet. Fry needn’t have worried. Once the doors of the trendy Grafton Galleries opened on 8 November 1910 word got around quickly and in days, thanks partly to some negative press publicity, everyone was soon talking about the show.

Fry had prepared the ground. He had recruited two committees of the great and good in the Arts and had persuaded the respected critic Desmond McCarthy to come on board as Secretary for a fee of £400 and to contribute a short preface to the catalogue, based on his notes. As for this catalogue itself—it was the dullest thing imaginable-- a 40 page octavo job priced at one shilling and made of thick paper with muddy brown paper covers and, bizarrely, no illustrations whatsoever.[R.M. Healey]

Thanks Robin, wise words indeed and to be continued.... I know that H.M. Bateman did a cartoon of visitors to the exhibition (so far unfindable) probably showing shocked faces and people keeling over in front of the strange art that had invaded London. If anyone has an example of it please dispatch it to us! It was reviewed by Rupert Brooke, Charles Ricketts, Arnold Bennett (as Jacob Tonson) Holbrook Jackson (in an article called 'Pop Goes the Past') and the fascist Ludovici. There is an entire book devoted to the critical reception the Post Impressionists received in Britain (by J.B. Bullen). Values will be discussed in the next part--the only British catalogue of comparable value that I can think of is that of the 1929 Bruno Hat exhibition ( a surrealist hoax/ lampoon) at Bryan Guinness's house at 10 Buckingham Street, London SW1. The introduction to the catalogue ('Approach to Hat') is by Evelyn Waugh under the pseudonym A.R. de T. Also on the subject of Fry one must not forget 'The Roger Fry Memorial Exhibition' catalogue by Virginia Woolf (1935). Only 125 copies were produced and it can go for than Bruno and the above combined. Oddly enough I need a copy at the moment so ship and bill, please.
Posted by Bookride at 1/24/2010

I heard of a Yorkshire dealer who found a very scarce Monet catalogue stapled to the back of a cheap print of The Scream.

After it sold at auction, he was asked how he knew to look at the back of the print, and he sad; 'Where tha's Munch tha's Monet'

I'm a picture researcher at Tate Modern and I'm currently looking for the poster for Manet and the Post-Impressionists' at the Grafton Galleries 1910 - is that what you have illustrated up there? May I ask where you sourced it? Also I found the cartoons you were looking for:
http://www.bridgemanart.com/image/Reynolds-Frank-1876-1953/Post-Impressionist-Expressions-Sketches-of-the-1910-11-Manet-and-the-Post-Impressionists-Exhibition/8e82f058865b4c9fba40edc76b858586?key=Manet%20and%20the%20Post-Impressionists'%20at%20the%20Grafton%20Galleries%201910&filter=CBPOIHV&thumb=x150&num=15&page=1