Below is a sample of George Jeffrey's handwriting. He has priced a 5 vol set of Arthur Mee's I SEE ALL( 'The World's First Picture Encyclopedia') once a desirable set which had lost favour even before the web. His usual price was £1 with the long flourish afterwards. £15 was serious money down Farringdon way in the early 70s. I once had the whimsical notion of compiling a monograph on dealer's pricing hands so that you could identify where a book had been bought, but it seemed an endless task with generations of pricers and, over time, 1000s of shops. There are probably a 100 different styles coming out of Hay on Wye alone. Iain Sinclair's neat little signed price (i/s) will one day add to the price of the books that he sold at Camden Passage. Did Orwell price books when he was as a part- time assistant in "Booklover's Corner" in Hampstead? Presumably Nancy Mitford priced books in her time at Heywood Hill and over in Berserkeley Jonathan Lethem must have pencilled in a few prices in his days at Moe's. Joseph Connolly priced books for decades, so far adding no discernible value; Graham Greene was involved with a bookshop or two - but may never have wielded a pencil and rubber.

Occasionally you get a collection where the buyer has left the price in and a neat note as to where, when and in which shop the book was bought. Who could not recognise a book priced by Mr Peake at the Scientific Anglian in Norwich, or the looped 'ff' of George Locke from Ferret Fantasy? 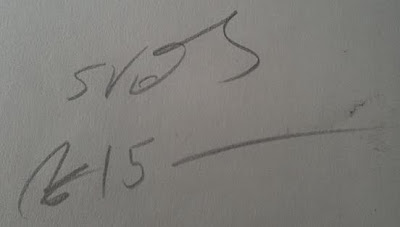 'I see All' can only be bought from Aardvaark at £250, and an odd volume is catalogued at £25. Lost favour? Do me a favour! Mind you I paid £30 for mine and look at it about once a year for about 10 minutes.

Mr Peake at the Scientific Anglian was recognisable not only for the box he drew round the price, but also for the ferocity with which he incised it with his biro. I have paperbacks from the 1970s where his prices have been scored into the covers and traced themselves into the pages beneath.

Jonathan Lethem did indeed price books at Moe's in Berkeley, probably thousands of them. He was one of the book buyers for a long time. It's not likely that anyone but himself could identify them though since there was a similar format for most of the buyers. He once offered to buy back a copy of The City in Slang: New York Life and Popular Speech that I had just bought there from me.

There was (is) a pricer in Hay-on-Wye (I think) who marks with the figure followed by a large loop that curls over the price and completes underneath. Books marked such have surfaced over many years now and it takes half a rubber to tidy the endpaper up...

There was a bookseller in outer London who used to LICK the point of his pencil from time to time - he was not, I imagine, a very healthy eater, and his prices were very, very hard to shift. It was not an attractive habit anyway... One way round it, I found, was to suffix his scrawl with a faint /-/- , in the hope of making it look like a stonking pre-decimal price; but since he was a regular supplier of VERY cheap books, we had to put up with it! Now "retired", alas.