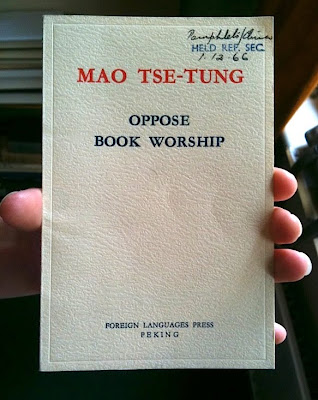 Among a bunch of books and pamphlets de-accessioned from the Commonwealth Office we found this gem. This was part of a purchase of political and topographical items we acquired in 2009 which included such items as a run of a North Korean news weekly in English with a colour picture of Kim Jong-Il on every page (some unopened in their original mailing envelopes.)

This small pamphlet Oppose Book Worship is the first pocket edition from 1966 of a speech made in May 1930 by Mao Zedong (as he is now known). It seems to be worth a fiver. The amusing left-leaning Bolerium book consortium trading out of San Francisco sum the book up thus - 'Mao's message: "If you don't know what you're talking about, shut up!" ' I had hoped that the book was attacking the mawkish reverence for books that is now so prevalent on web book sites like LibraryThing but Mao has more serious fish to fry. Ironically he is appealing to people to think for themselves and to conduct their own investigations. The word from the Chairman was:

'...Whatever is written in a book is right — such is still the mentality of culturally backward Chinese peasants. Strangely enough, within the Communist Party there are also people who always say in a discussion, "Show me where it's written in the book." ...The method of studying the social sciences exclusively from the book is likewise extremely dangerous and may even lead one onto the road of counter-revolution. Clear proof of this is provided by the fact that whole batches of Chinese Communists who confined themselves to books in their study of the social sciences have turned into counter-revolutionaries... We need books, but we must overcome book worship, which is divorced from the actual situation.'

Another chapter goes into the methods of investigation and 'deep probing' - mainly a matter of discussion and 'fact-finding meetings.' Mao's mantra is - 'to investigate a problem is to solve it' and also 'you must not talk nonsense.' Nowadays it would be 'oppose Google worship...' and as Mao might have said 'whatever is said on the internet is right, such is still the mentality of the culturally backward...'

The first edition of Mao's 'Little Red Book' appeared in May 1964 and within 4 years 700 million copies had been printed. The first edition seems to command about £5000 and does not have to be red. Its title page should look like the pic below and there is much detail about it all over the fallible internet -especially at Bibsite. If you have one 'probe deeply.' 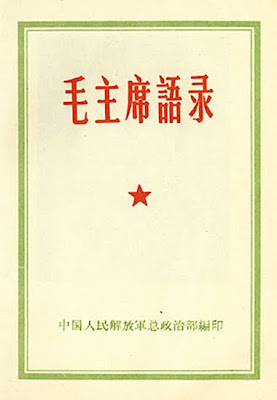