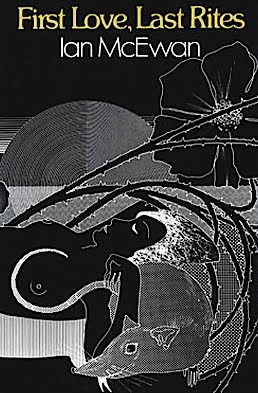 MODERN FIRST EDITION
A serious and collectable first edition from one of the big players in the 70s Brit pack of novelists--the others include Barnes, Amis and Rushdie. The New Yorker notes;' It is now a commonplace that McEwan has edged past his peers to become England’s national author.' Movies are made from his books and he has gone from an edgy cult novelist to a mainstream, middle class favourite--is he heir to the mantle of Nigel Balchin, Nevile Shute, C.P. Snow and J. B. Priestley or, as Martin Amis has suggested, a new Conrad ? If the latter then his current prices may rise in time and his early works may be, as several dealers put it, be 'ones for the vault' or 'the pension fund.' Talk of pension funds however usually indicates desperation, or that the price is too high now but you merely have to wait a few decades for a gilt-edged payoff.

First Love, Last Rites, a collection of eight short stories begins with a tale of incest -a boy so intent on losing his virginity that he settles on his sister. Further themes of sex, perversion, and the grotesque run through the stories, three of which have been filmed. Comparisons were made at the time with Roald Dahl, one story 'Solid Geometry' was especially fancied. The New York Times came up with painterly comparisons - "Ian McEwan's fictional world combin[es] the bleak, dreamlike quality of de Chirico's city-scapes with the strange eroticism of canvases by Balthus. Menace lies crouched between the lines of his neat, angular prose, and weird, grisly things occur in his books with nearly casual aplomb."

VALUE? It is hard to find copies in fine jackets for much less than £700 and you may have £1000 for a fine signed copy. There was a well attended signing shortly after publication at the Royal Society of Literature. OUTLOOK? Hard to call--probably good but not spectacular. Most of his books are fairly easily found, he is unlikely now to write a staggering masterpiece--a Magic Mountain or a Lolita or Decline and Fall- his works are said to be becoming very slightly duller. He is unlikely to do a Cormac and appear on Oprah, but movies may lift his prices. He could become the new Graham Greene in terms of collectability, but it seems unlikely. Buy modestly priced copies and hold until death or dotage. His best book is said to be The Child in Time which can be still be bought realtively reasonably.

Although never exactly a bliss-ninny McEwan was something of a hippy with the usual mystical baggage (and even according to Amis several kaftans) and often pictured in a three button hand me down and Lennonish specs. In this century he has fervently embraced rationalism, finds belief in God and the hereafter dim-witted, even abusive and hangs out with Christopher Hitchens (author of God is not Great, I am.) In going into the mainstream, the solid novel researched to within an inch of its life, he has vastly broadened his fanbase and there are those who feel his early works, now relatively scarce, should be priced as if he is a colossus of literature, one seller wanting £8500 for a fine/fine signed first of First Love. Book collectors are remarkably tolerant--if an ice cream seller wanted $25 for a lolly or a gas station $50 a gallon they would be hounded out of town by a braying, bloodthirsty mob. Possibly such dealers are prepared to wait a lifetime for prices to catch up or for a plutocrat collector to lose his mind and hit the buy button. Peter Howard always told me never to criticise another man's prices, because there may be something you don't know about their situation, Driffield used to say there was 'no statagem too strange' for a book dealer to use.

TRIVIA. Three years ago, McEwan culled the fiction library of his Fitrovia mansion. Instead of calling in a nearby bookseller he and his younger son handed out thirty novels in a nearby park. In an essay for the Guardian, McEwan reported that “every young woman we approached . . . was eager and grateful to take a book,” whereas the men “could not be persuaded. ‘Nah, nah. Not for me. Thanks, mate, but no.’ ” The researcher’s conclusion: “When women stop reading, the novel will be dead.”
Posted by Bookride at 6/23/2010

This bloodthirsty mob, are you sure they are not baying rather than braying. If they were a bunch of upper class toffs they may well be braying, I guess. And do you mean Waugh's 'Decline and Fall'?

His later books may as well come with their own York Notes for 'A' level students - they seem to be so obviously "designed". Not that they are bad books exactly; but they seem to have only a veneer of depth. The new Conrad? Conrad Aiken maybe.