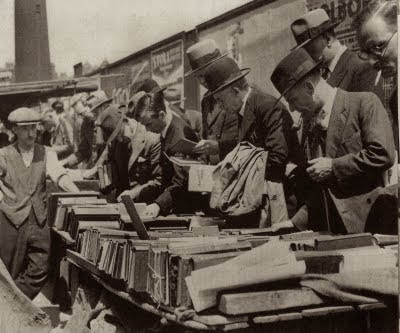 There were bookstalls along London’s Farringdon Road from the 1870s, but the ones that collectors alive today remember with affection were a string of stalls run by the Jeffrey family from around 1909 until 1994. In 1932 the journalist Harold Massingham listed some of the volumes that were likely to be found on these stalls:

‘Mammoth folios, Old Strand Magazines, Andrewes on the Ten Commandments, Pindar’s Prolegomena in Olympionicas, A System of Gynaecology, Radium Therapeutics, A New Concordance, Moore’s Navigator, Moody’s Analysis of Railroad Investments, Cowper’s Companion to the Temple, Elinor Glyn’s The Man and the Moment, A New History of Methodism, Gall Bladder and Bile Ducts, Chitty’s Statutes, Booth’s In Darkest England, The Inventor of the Numerical Type for China, A Woman Sold and Other Poems, Tilyard’s Stones of Stumbling, My Friend the Curate, McHenry’s Spanish Grammar, Letters of Joseph Jekyll, The Life of Isabella Bird, Aurora Borealis Academia. ‘

Other grateful customers at this time included Betjeman, his friend Geoffrey Grigson, and the popular novelist Jeffery Farnol. Later on, Spike Milligan, rock music writer Charles Shaar Murray and the West Indian guru CLR James, were regular browsers This was during the early era of George Jeffrey III, an instantly recognisable figure in his blue nylon overall and thermos flask, who had taken over from his father in 1957. Many booksellers built their stock from these stalls. One dealer from New Zealand opened a book and found some letters from Lord Byron enclosed. Cult psychogeographer Iain Sinclair, who had a stall in Camden Passage at that time, found rare modern fiction, such as David Gascoyne’s novel Opening Day in the piles of books dumped onto the pavements at twenty-five pence a throw, and which I regarded with some disdain. Bewick expert Nigel Tattersfield discovered in a box a scribal copy of Thomas More’s Comfort Agaynst Trybulacion dating from the 1530s, but bound in Victorian cloth and priced at £20, which he later sold for £42,000, while a fellow Bewick man, Iain Bain bought the original plates of David Lucas’s Constable’s Landscape Scenery, which ended up at the Tate. Jeffrey sold original drawings too. According to the artist Geoffrey Fletcher someone found a Graham Sutherland drawing among a pile of original artwork. I myself obtained a large portfolio of prints and drawings for a mere £6 only to discover when I got home that half of them were by the portraitist Henry Edridge and the antiquarian Thomas Fisher. Not long afterwards I bought for just £50 an exceedingly rare second edition of Foxe’s Actes and Monumentes ( later dubbed the 'Book of Martyrs'- pic below) dated 1570, complete with gruesome woodcuts of ‘heretics ‘being burned, which is considered almost a Holy relic of Protestantism by American dealers of the Bible Belt, who offer single pages from such early editions for upwards of $200. Here too were numerous 18th and early 19th Court Guides, odd volumes of the Gentleman’s Magazine and the Annual Review and huge Cassini maps of France ( the precursors of our Ordnance Survey maps )from the late 18th century for £3 each . I recall one customer getting stroppy when he thought he had put aside a particular map only to discover that I had already laid claim to it . I seem to recall that I came off worse in that dispute. Some dealers I have spoken to recalled incidents of mild violence arising from such disputes. Many dealers crowding around the stall on the regular Saturday scramble circumvented any possible problems by grabbing any books that mildly interested them from the new stock that Jeffrey dumped on the trestle table. They would then retire like bibliographical squirrels to the nearby wall, leisurely go through their pile and select the few books they actually wanted to buy, before returning the rejected tomes to the trestle tables. I refused to take part in this unseemly ritual, thinking it highly unethical, but no doubt I was the loser by this decision. No-one was sure where Jeffrey obtained his eclectic stock, though judging from the nature of many of the books on sale, and the plethora of bookplates, many must have come from disbanded private and institutional libraries and from retired book dealers. For instance, when the famous poetry bookshop Turret Books folded, much of the stock ended up on Jeffrey’s stalls. 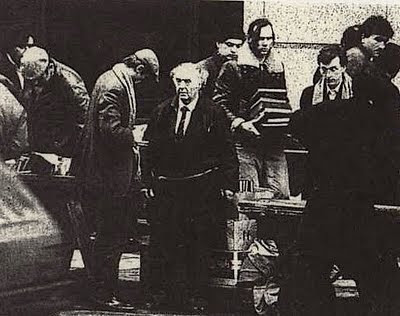 Jeffrey too had a strange attitude towards his stock. If you dared dispute the price of an item he was likely to snatch it back and rip it in half before your eyes. If he caught you stealing you were banned for life. And oddest of all, he seemed complacent about how items he knew were rare were handled by his customers. I distinctly recall the rare American first edition of Washington Irving’s Sketch Book (1819) which was priced at £20, getting tattier and tattier by the week as it passed through hundred of hands over a period of months, until it was almost in tatters. From being worth hundreds it ended up almost worthless and fit only for the bin. And doubtless, over the years, this relaxed attitude towards the source of his livelihood resulted in the relegation of many other once valuable books to the rubbish heap. And indeed rubbish bins in his part of Farringdon Road were a good hunting ground. When the trestle tables had been towed away for the day, it was sometimes worthwhile scavenging among the litter bins for mid eighteen century topographical prints and old book boards.

I was told by one dealer that Jeffrey handled so many books that he couldn’t keep up with the valuation of his stock and that he was probably just happy to make a decent profit from his business. And he did well from his trade, of that there’s no doubt. He was unlikely to have lost sleep over the disposal of the odd Washington Irving first, though I remain to be convinced that he regarded with equanimity the loss of a sixteenth century manuscript worth over £40,000. When Jeffrey at last went to that great book warehouse in the sky the local council took the opportunity to raise the rent for his pitch. His son decided to opt out ---and an era came to an end. [R.M.Healey] 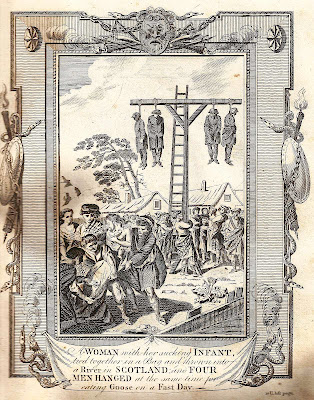 Thanks Robin. Ah George! It is hard to join wholeheartedly in the sentiment about George being a wonderful old character, which he undoubtedly was, as to me he was a fierce and implacable business rival in book clearances and also could not be outbid at auction if he fancied a lot. He used the dangerous but effective cross subsidisation technique. If one lot came in cheap you put the amount saved on the next lot and so on. This can lead to one paying £500 for a lot only worth £300 but it frightens off the opposition. It tended to work, although as the wise dealer Roger Elliott once said--at auction when you get rid of a rival he is quickly replaced, sometimes the next week. On the subject of the More scribal MS George said a wise thing, something to the effect that he could have wasted a lifetime looking closely at his books and checking every unusual item but that was just not his style. Anyone would be slightly peeved to drop £40K (probably about £200,000 now) but he was not inconsolable and Nigel T always told me he was treated just the same afterwards - and found further treasures, but none as handy as the blessed Saint Thomas More...
Posted by Bookride at 6/27/2010

I remember George's wife looking after the stall, one day she was selling a book to me for five pounds when I pointed out it was twenty five pounds. The next time I went there, George and his wife was there. I took a book to him to buy, Peter and Wendy 1911 first edition and he would not take any money for it, he gave it to me because I would not cheat his wife. Gone are the days! Your site is great Bookride. I must get to your shop again, instead of buying on eBay.

I have a book dated 1820 publisher A.L.Burt...the sketch book of geoffrey crayon gent ..by washington irving ..First page...advertisement to the first american edition...the following writings are published on experiment;should they please, they maybe followed by others....etc. london 1819.....second page ..the following desultory are part of a series written in this country but published in america.the author is aware of the austerity with which the writings of his country-men have hitherto been treated by british critics etc...wondering abut this book l.l.