When I interviewed the Ruislip Bungalow Murder Man he told me that around 99% of the books in his huge collection dealt with murder --incidentally, why does 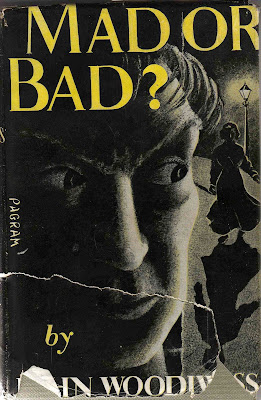 Rumpole refer to the ‘Penge Bungalow Murders’, when there are no bungalows in Penge –unless anyone knows any better ? . Not only are there few books on fraud and theft in his collection, but many of those on murder are, as he is ready to admit, with refreshing candour, almost worthless from a scholarly point of view. For instance, among his hundred books on Jack the Ripper only a dozen are of historical value. He selects as one of the best A Complete History of Jack the Ripper by Philip Sugden, which offers up just one name----that of George Chapman. One of the historically ‘worthless’ tomes in his library is William Stewart’s Jack the Ripper: a New Theory (1939 ),a book which, probably due to its small print run, is now ‘ a scarce and much sought after, early Ripper work’. Stewart, who appears to have been obsessed with his subject, even to the extent of making models of the murder sites from the original plans, argues that the killer was a woman—a midwife, no less. Today his book fetches tidy sums, and on ABE Harrington wants $1,253 for a jacket-less copy, a price high enough to stop it selling with any alacrity.

Books about executioners and particular executions are, he says, definitely worth searching for. The Victorian hangman, James Berry was one of the very few who left behind recollections of their time in office—indeed he published a book, My Experiences as an Executioner (1892), while he was still hanging people --- a deviation from correct practice which was frowned upon by the Home Office at the time and cost him his job. Bizarrely, some copies of the dull David and Charles reprint of 1972 cost more than the one single copy of the rarish first edition currently featuring on ABE at a reasonable $109. Copies of the memoirs of Albert Pierrepoint, who topped 435 murderers between 1932 and 1956, are common enough in paperback or hardback, but the actual diaries on which he based his book remained unsold at £15,000 by Jarndyce at the 2010 Antiquarian Book Fair at Olympia. Perhaps collectors feel uncomfortable reading such intimate details of executions from the hand of someone so closely involved.

Books exposing prison conditions---the older the better—are worth searching for. One of my favourite is Jottings from Jail ( 1887) by London prison chaplain J. W. Horsley, who has a Mayhew-like approach to the prison underworld ( the book includes 35 pages of explanations of rhyming slang). There is also a rather striking illustrated cloth cover featuring chains, jemmies, bars and other symbols of punishment. I bought my rather tattered copy for 60 new pence at Ralph’s in Swansea around ten years ago, but today one online chancer wants $400 for his ex-library copy, while we are on the subject of criminal tendencies.

Books on unsolvable cases are appealing to True Crime fans. The case of Ronald Light, a ne’er do well who probably escaped hanging for the shooting of Bella Wright in 1919, occupies little space in most books on twentieth century crime , but H. R. Wakefield in his Green Bicycle Case (1930) managed to cobble up a book of 152 pages from it. This ordinary enough book should command less than £20 in most respectable bookshops, but for some reason some dealers are charging $125 and $175 for their jacketed copies. There seems be some agreement among dealers that older books on true crime must always be expensive, especially if they have striking titles. Certainly crime pays for them. Much better value is Mad or Bad ? (1950) in which John Woodiwiss discusses some famous cases that pose questions regarding the mental stability of miscreants. You can buy a jacketed copy, complete with typically creepy cover by Edward Pagram, for under $15 on ABE. 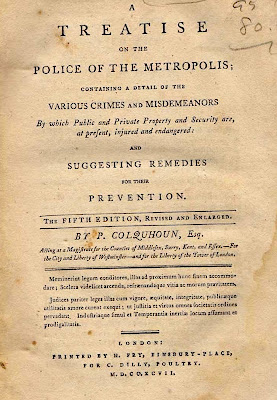 Finally, probably the most famous—certainly the most quoted in modern accounts of late eighteenth century crime—is Patrick Colquoun’s Treatise on the Police of the Metropolis, first published in1796, but reprinted regularly for years afterwards. Colquhoun was a magistrate with a downer on petty pilfering and fraud and his statistics-heavy treatise laid the foundations for the establishment of Peel’s Metropolitan Police Force in 1829. Read it and be amazed at the author’s most un PC attacks on certain reprobates, particularly the ‘ lower class of Jews’, who are described as a:
‘ depraved race … educated in idleness from their earliest infancy, they acquire every debauched and vicious principles which can fit them for the most complicated arts of fraud and deception, to which they seldom fail to add the crime of perjury … ‘

I found a copy of an early edition in the sale of the historian J. H. Plumb’s library a few years ago. This association meant that it went for a ridiculously high sum, but only months later through ABE I found a similar copy in Nova Scotia for a mere Canadian $80 in original boards, with a buckram spine and inscribed label, which on the flyleaf bore the signature of Robert Wilson, who I would like to think was the same General Sir Robert Wilson who was knighted at 24 ( surely a record ), became a radical MP and was drummed out of the army for being compassionate. I was probably lucky in this purchase. Today you won’t secure an early edition for much under $370, with firsts of this iconic book going for more than $2,000.

Many thanks Robin. Sorry not blogging myself currently due to massive onslaught of books. It's murder. The misogynist poet JK Stephen used to be my favourite candidate for the Ripper but a researcher ruled him out using the train timetable from Cambridge to King's Cross. He was, of course, a cousin of Virginia Woolf and would have known her as a girl. Also apparently related to VW was the unpleasant Dennis Nielsen, the British civil servant who strangled young men at his Muswell Hill residence. When told by his biographer of his connection to Virginia Woolf he commented: "I don't like the sound of that. She went mad, you know."

Rock on Robin, I'll be scribbling something soon.
Posted by Bookride at 5/28/2011

"incidentally, why does Rumpole refer to the ‘Penge Bungalow Murders’, when there are no bungalows in Penge –unless anyone knows any better ?"

It was Mr and Mrs Bungalow who were murdered. That's why there are no Bungalows in Penge, or anywhere else in England.

You will no doubt be uninterested to hear that the Green Bicycle Case inspired an Aussie pop group called the Lucksmiths to record an album by that title. Pretty good stuff.

On the subject of unsolvable crimes, the case of the "Black Dahlia", a young woman discovered cut in half in Los Angeles in 1947, has been the subject of dozens of books, movies, and magazine articles. Supposedly there is still an informal group of LAPD homicide detectives who get together to talk about the case and argue about leads to this day, as well as a great deal of internet forumry.

It seems that he is calling the prefabricated houses 'bungalows'. I grew up in Penge and after the war there were many box like houses made of asbestos to house those who were displaced due to the bombing. They were supposed to be temporary. There were many near Penge East train station. Penge was the most bombed square mile in England during the war.
Ann