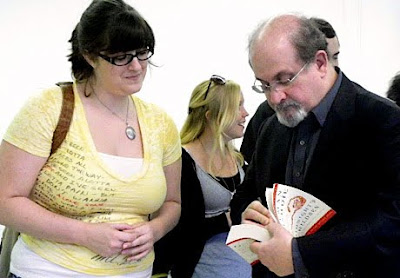 When did the cult of book signing begin ? By book-signing I mean the organised book-signing in a bookshop. I ask because it is not always obvious in what circumstances a book was signed. In my copy of E.V. Lucas’s At the Shrine of St Charles (1934), Auntie Jessie of 21, Woodstock Road, Croydon has interleaved a note telling her niece that she had ‘a chance to get this autographed copy of St Charles‘. The question is, did, she stand in line at the Croydon branch of W. H. Smiths some time in 1934 to get that nice Mr Lucas to sign his latest work? Or did she schlep to town later for a talk by Lucas, perhaps at a meeting of the Charles Lamb Society ?

Is an author necessarily going to include in their inscription the fact that the book was signed in a shop, with all that this entails? After all, even today, when we profess not to care about such social niceties, signing a cartload of books from cardboard boxes in a branch of Waterstones, complete with a simpering PR graduate aide, is one thing; a few books brought in by genuine fans for signatures at a Foyles literary luncheon is quite another. Is anyone going to believe you when you boast that Martin Amis signed your first of The Rachel Papers over a glass of Chablis and a longish chat on the literary merits of Saul Bellow at the Hay Festival? ‘Well, all I see is his signature’, your sceptical friend remarks.’ Nothing about Bellow or Hay ‘. Are you sure you didn’t meet him at Hatchards’s ? 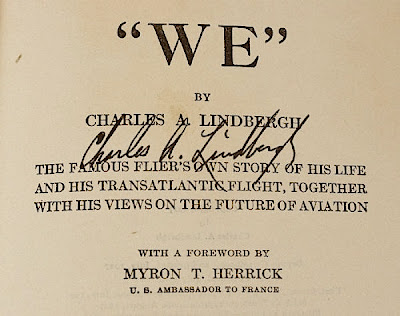 You are suitably mortified. You had to talk for ten minutes about tennis to keep him keen, you recall. And the rest of the Festival was a waste of time and money. Good job I like second hand books. But to return to the book store. The literature on book store signings is pretty thin. Diaries and letters of the twentieth century are probably the best source, but I could find little. And if you Google ‘ history of book signings ‘, hoping to get some juicy anecdotes on Auden or Waugh in the thirties, you are disappointed . So perhaps this particular marketing phenomenon is of a comparatively recent date. And indeed, according to one American internet source, Book Tours as we know them today, were the brainchild of the novelist Jacqueline Susann in the sixties. Apparently she would hire a plane, load it with books, and check herself into a string of bookstores. But that degree of glitziness seems particularly American, and today the Book Tour, celebrity or otherwise, seems more popular in the States. 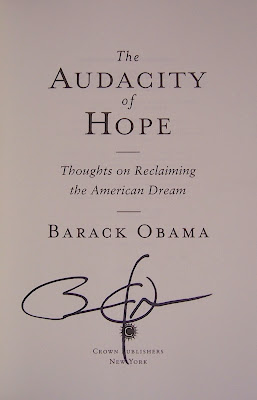 And what of the professional dealers who stand in line with the punters? Many authors despise the breed and claim to be able to pick them out from the modern Auntie Jessies. I have my doubts about this. The cunning dealer intent on obtaining a signature is unlikely to target the same author before a respectable period of time has elapsed. Moreover, many dealers are married (sometimes hard to believe) with children, all of whom can be deployed to obtain signatures. However, it is probably true that at a book signing no author will sign one of their previously published tomes, unless, one supposes, the customer has already bought a copy of the title being promoted.

I must admit to regarding this particular kind of opportunist dealer with sneaking admiration. The risk of being humiliated by an angry author is not something that everyone is prepared to take. And all for a signature ! And so I ask, what’s the big deal with signed contemporary fiction ? Here are some prices attached to items offered for sale by various dealers in the now defunct Book and Magazine Collector over the past three years.

And so on. They seemed foolishly expensive but surprisingly the net now just about bears them out. [R. M. Healey]

Thanks Robin. The Connery seems toppish but I guess it's bought by those in the thrall of Bond and he might be a difficult chap to corner with book and pen - so 225 smackers could possibly be raised. I had more luck on Google but you have to drill down to fan sites where discussions of book signings and the ungrateful ways of celebs is fairly rife. On the subject of angry authors a friend was at a Rushdie signing and asked the novelist to sign a few books, including a book he had fulsomely praised, the amazing ALL ABOUT H. HATTERR by G. V. Desani. Salman got in quite a bate that he was being asked to sign a book he didn't write, raised voices etc., Not sure about the etiquette there. I would be wary of asking Peter Ackroyd to sign Iain Sinclair's 'Lud Heat' for example (a book he acknowledged as a big influence on 'Hawksmoor.') Keep it simple might be the maxim when meeting the luminaries of lit.

A cautionary tale of a fan who spotted Dylan and asked for an autograph. He produced a book to sign and Bob was about to sign but the fan did not or could not provide a pen. 'No pen, no autograph' snapped the bard and hurried off.
Posted by Bookride at 10/28/2011

Once again, an interesting and thought-provoking post. I don't know when the first signing session was, but (talking of Auden) a senior colleague once told me that in 1937 a London bookshop had one for Auden's (and MacNeice's) "Letters from Iceland": it certainly turns up with a neat Auden signature more often than you'd expect. No doubt there were earlier signing sessions (I've had my suspicions about Davenant's "Gondibert", 1651) and it would be good to hear about them. As for unwilling authors, another senior colleague has a theory that the ones who get in a snit about it are actually the least collected anyway: I won't name the unwilling one he mentioned, even though he may recently have become a little more "collectable", but I once asked Seamus Heaney to sign a first of "Death of a Naturalist", and he did so without demur, just saying "That's a valuable book now, you know". But then he is a seriously good poet! I wouldn't ask anyone to sign a book by someone else, though: that does seem to be pushing it. Finally (I promise): I once saw an early P.D. James novel with a contemporary, and personal, calligraphic inscription "from Phyllis" - later ruined, IMNVHO, by a ballpoint signature "P.D. James". I should get out more. Sorry.

A journalist friend booked into Devonshire Gardens for a meal when he heard Dylan was staying there while in Glasgow, and wandered up to him with a copy of Blonde on Blonde - to be diverted by a heavy who said 'We don't do that'.

Another friend has a nice first of Macpherson's first Ossian - sadly it was a birthday present and there was a scribbled 'Happy Birthday Tommy' with a 1990 date all over the title page.

I once brought along a copy of Ian Rankin's first book The Flood to a signing - towards the end of his talk Rankin mentioned that he had given away most copies of The Flood (Reginald Hill did the same with his first Dalziel and Pascoe)
With some shame I proffered The Flood with the latest Rebus - Rankin smiled benign;y and signed both.

Thanks Edwin and thanks Angus. There are some very old books that often turn up signed but not much before 1650. If you are ever offered a signed Lewis Carroll it's always the slightly unsaleable Sylvie and Bruno, one wonders if he did some kind of signing session.

Time to trot out the old story-- a dealer bought a fine first of Huckleberry Finn lacking the front endpaper, when he remarked on this to the seller the chap said 'Sorry we had to tear that out - some guy called Samuel Clemens wrote his name on it.'

Years ago, I took some books along for a signing by James Ellroy. When he asked me my first name, I glibly said "Elmore". He was'nt having any of it!

[Groans at Nigel's Clemens story] - it may even be true!

Chazza if you ask Ellroy nicely he will draw a (pretty basic) doodle of his dog with his signature (his own not the dog's). The dog is called 'Dudley' which is nice for LA Confidential (I am not making this up - can send Nigel a pic!).

What about authors who charge for their signature ?
Should they only charge if they think you are trying to increase the value of a older book ?

Surely a getting a book signed in person is just a souvenir,like picking a seashell from the beach -trying to sell it on later is like selling your memories - a bit silly.

Always thought dealers getting their old stock signed is suspect,you only have their word and as such why don't they just sign the books themselves ?

What's really annoying are people like the photographers Bruce Davidson and Josef Koudelka, who both refuse to sign copies of their older books, on the basis that it drives up the price and since they get none of it, they won't do it. There was a recent incident in which Davidson got into a shouting match with an unhappy fan when Davidson refused to a copy of the first edition of Subway, saying he was there to sign copies of the third edition and nothing else. The flaw in their reasoning is that if they signed more copies, the price would drop; by refusing to sign, the price goes up. They're both miserly, unpleasant characters, and it's interesting to note that the demand for signed copies of their books is based on work they produced at the beginning of their careers, some 30 or 40 years ago, and not for anything recent.

Why do authors care about the monetary value of their books anyway (unless they are sitting on a pile of their own scarce books)? Are they under the impression that it is related to their literary worth?

I always feel a slight trepidation when i wait on line for a signing. Often authors have these horrible handlers who impose arbitrary rules half way through the line. My attitude as a collector is that authors who think they are above signing however many books are placed in front of them should consider how they make or made their money in the first place. Authors who get into a snit about the after market or ebay, or get angry at dealers (who by the way buy dozen of their books) just seem petty.

The strangest thing I have heard from authors is they seem to think that ARCs and proofs and the like are "worth a lot of money" when in my experience this is rarely true compared to the actual first printings which they normally will sign happily (TC Boyle lost a lot in my eyes when he refused to sign one for me).