The other John Lennon 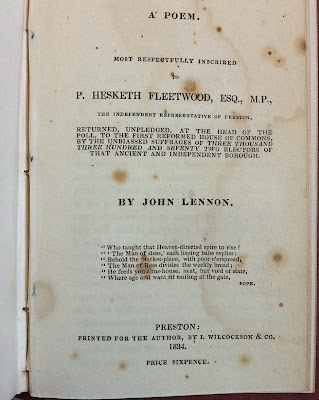 A very odd find in a box of antiquarian books bought at auction-- the completely unknown John Lennon's Rossall Hall. A Poem (Printed for the Author, Preston 1834.) It was bound up with 6 other books including a book of Epicurean recipes (1832) and Memoirs of Madame Malibran de Beriot by Isaac Nathan author of The Hebrew Melodies. All in a small rust coloured moiré cloth-bound book with a leather label on the spine with the word 'Miscellanies' lettered in gold. Decent condition with some occasional foxing to text. The John Lennon book appears to be, like its author, completely unknown-- no copies at WorldCat, Copac or the mighty University of Karlsruhe database which has the complete catalogues of many worldwide libraries. The book is an UNCLE ('Unique No Copy Located Elsewhere') and worth a small fortune (let me dream...) 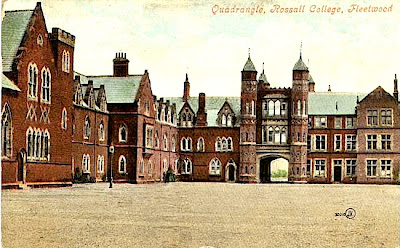 The book is a mere 36 pages and is mostly devoted to unadulterated praise of the great local landowner and philanthropist Sir Peter Hesketh-Fleetwood (1801 - 1866) who founded the town of Fleetwood, in Lancashire and was squire of Rossall Hall. At the time he also owned most of Southport. The book is dedicated to him and some of the verses may have been used in his election campaign. At the 1832 general election, Fleetwood was elected M.P. for Preston, in the first parliament following the Reform Act. The poem's style is slightly thumping, far better than McGonagall, but Swinburne he was not:

Lennon, however, was no sycophant, his backing of Fleetwood was based on the politician's promise of work in the reform parliament for the rights of a million hand-loom weavers '...who, for a series of years have been labouring under the most unjust privations ever yet recorded in the annals of England's domestic history.' Lennon was campaigning in his poems for a minimum wage of a pound a week for the weavers. Fleetwood's many good works are recorded in his lengthy Wikipedia entry. He was also responsible for starting the development of the new resort town of Fleetwood built on a rabbit warren at Rossall Point near his stately pile. Initially he had considered naming his new town New Liverpool or Wyreton. I can find no trace of this John Lennon, the political poet, but an afternoon in Preston Library would probably reveal a few facts about him. Politically he was on the side of the working man and a dogged campaigner for worker's rights- that and a certain facility for rhyming connect him to his illustrious namesake.

Other compelling connections appear with a bit of searching online. Rossall Hall later became a private school and was attended by Stan Parkes, John Lennon's cousin. A fan site has this:

"Lennon had a large affiliation with Fleetwood where he regularly visited his cousin Stanley Parkes, the 'big brother' to the young John, the son of his Aunt Elizabeth (known as Mater)...George Parkes, the husband of Elizabeth and father of Stanley, died young and they moved to 33 Galloway Road where they lived with a local Fleetwood solicitor Mr Hodson. Stanley recalls he would often visit Liverpool and return to Fleetwood in the school holidays with his cousin Leila, Aunt Harriet's daughter. Stanley recalls they would all go up to Blackpool on the tram two or three times a week during their summer holidays to see separate shows. They would visit the Blackpool Tower Circus and see artists such as Dickie Valentine, Arthur Askey, Max Bygraves and Joe Loss and his big band. However, Stanley recalls it was George Formby who John particularly liked. The duo used to pass Formby's house regularly on the bus journey from Preston to Fleetwood where he and his wife would often be sitting in deck chairs in their garden at the front of their house. Stanley recalls he and John would wave and they would wave back. Stanley and the young John were keen fans of Fleetwood Flyers Speedway Club and Fleetwood Town FC. " 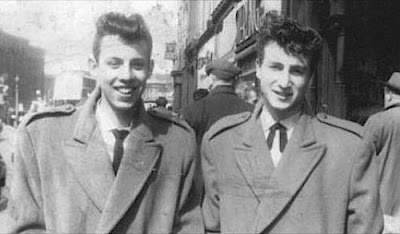 For a small outlay you could probably find the original John Lennon on ancestor or public records sites. He may even have been a relation to John Winston Lennon but probably not great grandfather as that man was said to have come from Ireland. A website called John Lennon's Family Tree states John Winston Lennon's great grandfather, James Lennon, son of Patrick Lennon, was born in County Down, Ireland in 1829. His father was a farmer. The John Lennon who flourished in 1832 appears to have been poor. He may have been a weaver himself ('One hundred hours we, every week/ Must toil for scanty fare...') He apologises to the great squire for 'the feeble outpourings of his rustic muse...the rude grasp of poverty will not afford me much time for mature reflection in the humble, but useful ranks, of a workman.' The book was printed by Wilcockson's of Preston. Who paid for the printing?
Posted by Bookride at 10/31/2011

Fascinating Nigel many thanks.


There are actually a lot of rather good poets sharing Lennon's artisanal background. Tom Leonard compiled an excellent anthology of working -class poets (including one or two well-kent names such as John Davidson) associated with Renfrew -

A sample from the London0born Marion Bernstein -

Man holds so exquisitively tight
To everything he deems his right;
If woman wants a share, to fight
She has, and strive with all her might.

But we are nothing like so jealous
As any of you surly fellows;
Give us our rights and we'll not care
To cheat our brothers of their share.

Above such selfish man-like fright,
We'd give fair play, let come what might,
To he or she folk, black or white,
And haste the reign of Human Right.

Google Books gives a little more: I tried
"John Lennon" weavers Preston
and turned up a few traces of Lennon's campaigning work in transcripts and histories. Seems he was indeed a weaver himself. Of course you have to filter out a lot of refs to the great Beatle.

Fascinating to read about such a completely forgotten and unique item. I must admit envy of such a rare--to me at least--bibliographic discovery.

Having briefly researched the Paisley publisher, Alexander Gardner, I remembered a much later work by a weaver published by them:

Rhymes and Recollections of a Hand-Loom Weaver by William Thom of Inverury, edited, with a biographical sketch, by W. Skinner, 1880.

Many thanks Edwin, Anon and Ralph -- yes it was fascinating to find and research this book. Thanks Edwin for that piece about radical poets and Enoch Soames. Good to hear that deep searching can uncover traces of our weaver poet. Often a famous (or common name) can make such searches arduous but I do see, thanks to your recommendation Anon (and Google Books) that our JL gave evidence about the weavers plight at Parliamentary Sessions in 1835 and 1836. As JWL said -- 'we all shine on!'

Amazing. Wonder who that is with John is it Stan and those coats, would you say they were Fleetwood Macs?

"Above such selfish man-like fright,
We'd give fair play, let come what might..."

I wonder was the word "bullshit" in use at the time?