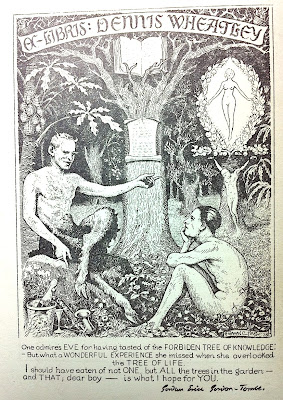 This incredible collection, rich in modern first editions, was acquired and catalogued by Blackwell's of Oxford in 1979. The venerable company did not quite 'get' modern first editions at the time and there were many bargains. Later they cottoned on to them and started asking higher prices than most dealers in the field. The condition of dust - jackets is not described and as late as the 1950s jackets were often not mentioned even if present. In Wheatley's case they were often fine but to not describe them seems amazing to the modern sensibility; they are the sine qua non of such collecting.

It is said one of the big orderers on the first day was the late Chris Radmall, one of the champions of the jacket in his boutique like shop in Covent Garden, London 'Bell, Book and Radmall.' Between Covent Garden and Santa Barbara the cult of the modern first, with its emphasis on condition and jackets, was busy being born. John Baxter in his Pound of Paper says that Radmall would have been equally at home in Carnaby Street and the (dust) jackets in his window were objects of beauty in themselves.***

The reasonableness of Blackwell's prices can be demonstated by looking on the net now for books that have Wheatley's bookplate. He had stuck them in the majority of books, usually in the version pictured above. Of the 2274 books about 60 have found their way back to dealers and are on ABE (there are doubtless more, but with the bookplate not noted by inept mom and pop operations etc.,) Many have risen in price by 20 or 30 times while the retail index has gone up about 4 times since 1979, but to be fair a lot of books, especially modern firsts, have outperformed these figures. A jacketless U.S. first of Hemingway's Farewell to Arms was listed at £80 - it has subsequently acquired a jacket and a dealer in Mobile, Alabama wants a not unreasonable £2400 for it. For £15 you could also have bought the 1929 UK first of Hem's great novel in the distinctive Lee Elliott dustwrapper - not uncommon but now a fairly easy £600 in fine/fine condition.

Some books from this cata have re- emerged with their jackets now actually described. Wheatley's signed copy of Eric Ambler's The Night Comers (1956) which was £12 has found it's way to bohemian Mill Valley in California where £420 is needed - the jacket is described as near fine with 'only the most minor wear to the extremities' and it is noted that the price is not clipped-- price-clipping was not much of an issue in 1979 and is not mentioned anywhere in the catalogue. The dealer notes 'this copy belonged to fellow master thriller author Dennis Wheatley (ornate bookplate).'

The bookplate by Frank Papé, whom Wheatley knew and collected, is a curious item. I had always thought that the centaur figure on the left was G.B. Shaw, but in fact it was W's mentor Gordon Eric Gordon-Tombe, murdered in sordid circumstances in 1922. At an auction in 1985 a dealer bought a 35,000 word manuscript by Wheatley that reveals he knew that his charismatic friend was a fraudster, orgiast and thief. He had fought with him on the Western Front and he used him as the model for the pre- Bond hero Gregory Sallust. 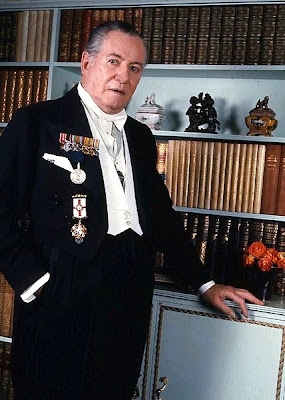 Talking of Bond there are no Flemings in the catalogue, possibly due to some animosity ...

One of the most startling item in the catalogue was in the first entry - 'the only extant whole copy of the torn-up photograph' in Who Killed Roger Prentice? (1937). This was in the very collectable crime series of crime dossiers consisting of facsimile documents and clues (burnt matches, cigarettes, train tickets etc.,) in little envelopes and the murderer's name in a sealed envelope. This was part of a 55 volume set of his own collection of his works sumptuously bound by Sangorski preserving the jackets (laid down) with the manuscript of one work ( Of Vice and Virtue) and a signed letter from Winston Churchill. All for £4500.

More to come-- including an examination of changing tastes in collecting. For example Blackwell's put £6 on a Charles Birkin's Devil's Spawn (1936) signed to Wheatley and fine in a jacket. At a 100 times this price the book would probably last less than a minute on the web in 2011. Some of the 2274 books however are now worth the same or less than they were priiced at 33 years ago...but not many.

*** Baxter also says that Chris Radmall launched the night-club Annabel's with his pal George Harrison, in fact it was a short-lived club for posh and beautiful persons called Sybilla's. Possibly George helped out.
Posted by Bookride at 10/22/2011

George definitely invested in Sybilla's club -- there is a website Beatlemoney.com that confirms this.